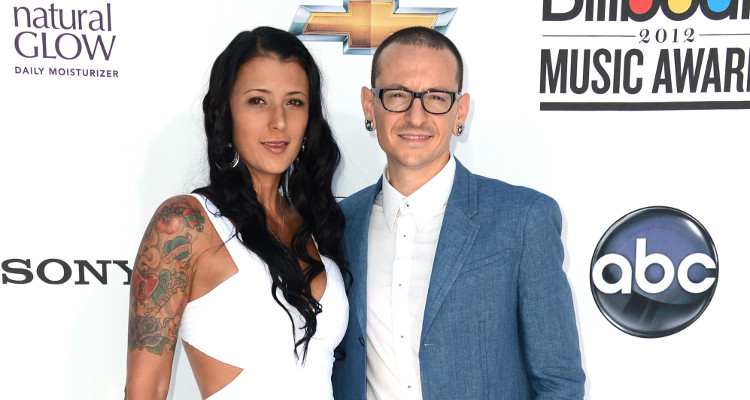 The world is mourning the news of Chester Bennington’s death. The 41-year-old singer committed suicide by hanging himself at his home in Palos Verdes Estates, California. His body was discovered by an employee on July 20.

The singer was alone at home at the time of his death as his family was not in town. In fact, the band released their new music video just two hours before the news of his death. Police are still investigating the matter, and family and friends are shocked over Chester Bennington’s death.

Bennington has six kids from his two marriages, and he was married to former Playboy model, Talinda Ann Bentley. Here are some details about the late singer’s second wife.

Bentley was born in Phoenix, Arizona on September 18, 1976, which makes Talinda Ann Bentley’s age to be 41.

According to sources, in her teenage years, Bentley has worked several jobs to support herself financially, which included an animal trainer, school teacher, a waitress, and more. She started working at the age of 14 at a burger joint.

When she worked as a teacher, she taught science to students in the sixth to eighth grades. In 1995, Bentley studied at the Los Angeles Music Academy. One of her profiles says that she graduated in 2000 with a major in veterinary medicine.

@Bethenny Thx 4 the pic this am! Now I know how my husbands fans feel!! pic.twitter.com/rnlcQMbVej

In late 2000, Bentley found success by posing as a Playboy model. She appeared in the College Girls section of Playboy magazine. For two years, till 2002, Bentley regularly featured in Playboy’s Spring issue.

Bentley was good friends with musician Ryan Shuck. Shuck and Bennington were close friends as well. Shuck introduced both of them, and they hit it off immediately.

The couple started dating in December 2004 and married in 2005. One year after their marriage, the couple welcomed their first child, the fourth for Bennington, Tyler Lee on March 16, 2006.

Chester Bennington was previously married to Samantha Marie Olitt, but they divorced in 2005. He was a broken man after his divorce and claimed that Bentley helped him to overcome it.

Bennington said, “My divorce was one of the worst and best things to ever happen to me in my life. Everything I had worked so hard for was gone after we were through. Everything! I was wiped out and it was tough on my ego to let go of all of that.” He continued, “I went from living in a huge house to a tiny apartment in Santa Monica. I was so drained and bitter during that time.” He further added, “When I met Talinda, I knew she was the one pretty instantly. She moved into my place after a week and a half or something like that.”

Bennington has a son Jaime with his ex-girlfriend, Elka Brand. He adopted a boy named Isaiah and had a son, Draven Sebastian Bennington, with his first wife. In 2011, Bentley and Bennington welcomed twin girls to their family, who they named Lila and Lily Bennington.

Talinda Ann Bentley is shocked over the death of her husband. Several of their friends took to social media to express their condolences. It is truly a difficult time for his family, and we hope they find the strength to cope with it. May Chester Bennington’s soul rest in peace.