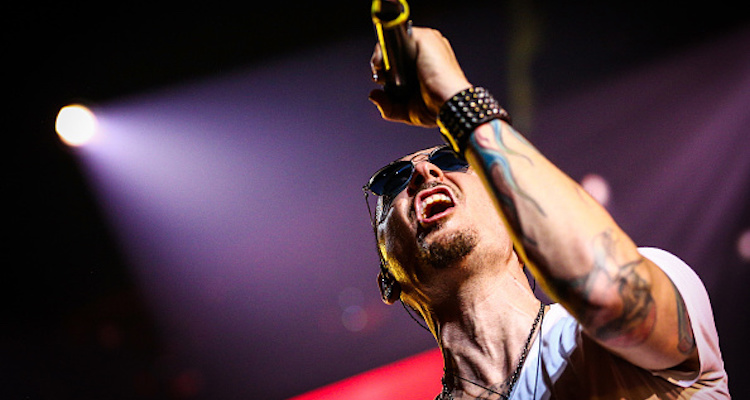 Chester Bennington and Linkin Park were one in the same and his family and fans are still processing this heavy loss. This year has witnessed many celebrity deaths and unfortunately, they weren’t all due to old age or health issues. Fans everywhere have related to Chester Bennington’s songs on one level or another and still don’t know why he took his own life. Chester Bennington’s net worth was $30.0 million, but he was worth much more to his loved ones. Here’s a look back at his life’s work before he died.

Chester Charles Bennington was born on March 20, 1976 in Phoenix, Arizona. When he was young his parents divorced and he lived with his father, who was a detective that specialized in sex crimes and abuse.

The singer’s childhood was a traumatic one and it wasn’t just because of Chester Bennington’s parents’ divorce. When he was seven years old, he was sexually assaulted by someone he considered a good friend.

He was Sexually Abused

“It escalated from a touchy, curious, ‘what does this thing do’ into full-on, crazy violations,” he told Kernag in 2008. “I was getting beaten up and being forced to do things I didn’t want to do. It destroyed my self-confidence. Like most people, I was too afraid to say anything. I didn’t want people to think I was gay or that I was lying. It was a horrible experience. The sexual assaults continued until I was 13.”

Bennington eventually told his father what happened but didn’t want revenge or to press charges, after he discovered that the abuser was a victim as well.

He Had a Drug Addiction

After the traumatic event, Bennington turned to drug use to help cope with his pain and PTSD. When he was a teen he used a variety of drugs including opium, cocaine, marijuana, LSD, meth, and alcohol.

“When I was young, getting beaten up and pretty much raped was no fun,” he told The Guardian in 2011. “No one wants that to happen to you and honestly, I don’t remember when it started.”

He added: “I remember that stuff happening to me at that stage and even thinking about it now makes me want to cry,” he said. “My God, no wonder I became a drug addict. No wonder I just went completely insane for a little while.”

High school was also hard for him and he lived with his mother at the time, who tried to shelter him when she learned of his drug addiction.

How Rich was Chester Bennington?

Linkin Park never set out to be rich and famous but not everyone gets what they want, do they? By the end of high school, Bennington put most of his time into making music and pursuing it on a full-time basis. But he quickly found himself discouraged and he almost quit entirely. His life changed forever when Jeff Blue, the vice president of A&R at Zomba Music in Los Angeles asked him to audition for the band Xero. Bennington skipped his birthday and worked on his audition tape instead, which paid off once he got the gig in 1999. The rock band was later changed to Linkin Park— in honor of Santa Monica’s Lincoln Park—and officially launched in 2000. Since then, the world knew band mates Mike Shinoda, Brad Delson, Rob Bourdon, and Joe Hahn, as one of the most successful rock bands of their time.

Bennington’s net worth was $30.0 million and the band sold over 70 million albums world wide. Chester Bennington’s albums with the group, such as Hybrid Theory and One More Light, cemented them as rock stars. Linkin Park songs such as “Numb,” “Crawling,” “In the End,” and “Faint” are just some of the favorites that fans still go to and it’s no wonder why they found themselves on top of Billboard charts on multiple occasions.

Chester met his first wife Samantha Marie Olit while in Arizona in 1996 and they got married that same year on Halloween. She was born on December 1, 1971 in Detroit, Michigan and she divorced Chester in 2005. They had a son together in 2002, named Draven. She’s currently a life coach and started the practice Creative Life Coaching.

Three of Chester Bennington’s six kids are from his second marriage to former Playboy model, Talinda Ann Bentley. She was born on September 19, 1976 in Arizona and studied at the Los Angeles Music Academy. They got married in 2005 and their children are: Twins Lila and Lily, and Tyler Lee. He also has a son, Jaime, with his ex-girlfriend, Elka Brand, whose son Isaiah was officially adopted by Bennington in 2006.

The “Numb” singer’s body was found dead on Thursday before 9:00 a.m. PST at Chester Bennington’s house in the Palos Verdes Estates, California. TMZ reported that he hung himself and he reportedly had plans with the band the day he died. he also died on his late friend Chris Cornell‘s birthday, the Soundgarden frontman. He was also a singer and committed suicide.