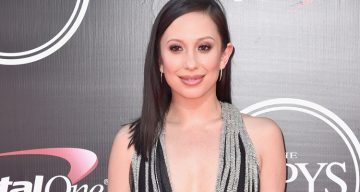 Cheryl Burke has been a part of Dancing With the Stars since 2006 and currently, she is blogging about season 23 of Dancing with the Stars. Burke’s celebrity partner is Ryan Lochte, and she admits that Lochte needs to step up his dancing skills in order to win this competition. All of us know that Dancing with the Stars has many amazing and talented professional dancers and Cheryl Burke is certainly one of them. So, without any further ado, let us take a look at Cheryl Burke’s wiki and learn some interesting facts about her.

She was born as Cheryl Stephanie Burke on May 3, 1984, in San Francisco, California and grew up in Atherton, California. This professional ballroom dancer is 32 years old and is of Filipino, Irish, and Russian descent. Her parents are Sherri (Bautista) and Stephen Burke.

Initially, she studied ballet and later on became interested in ballroom dancing. She was a dancing enthusiast ever since her childhood, and it comes as no surprise that she is an amazing dancer today.

Her Career on Dancing With the Stars

She was not a part of the show for three consecutive seasons of Dancing with the Stars, but now that she is back, Burke and Lochte are working hard to be crowned the winners of this season of Dancing With the Stars. In one of the episodes of the dance show, they paid tribute to Lochte’s mother, who has been with him through thick and thin.

Cheryl Burke has even made her TV acting debut in one of the episodes of The Suite Life of Zack & Cody. Along with her, there were other choreographers on the show, including Louis Van Amstel and Ashly DelGrosso.

In 2008, Burke opened a dance studio and in the following year, she produced her own line of activewear. Besides being a part of Dancing With the Stars, Burke has also been a part of several promotional activities for brands such as Depend Silhouette briefs, Impress Nails, and Sargento Cheese.

Additionally, in 2011, Cheryl Burke released her autobiography titled, Dancing Lessons: How I Found Passion and Potential on the Dance Floor and in Life. Her autobiography provided various details about her personal life, one of them was about how she was molested at the age of five by her family’s handyman. Burke disclosed this information to her family and the man was sentenced to 22 years in prison.

Currently, sources claim that Cheryl Burke is single. She was dating her longtime friend and entrepreneur, JT Torregiani in 2014, however the couple decided to part ways and ended their relationship in May of 2015.

Burke has received several awards and recognition for her outstanding career in dance. In 2005, she won the World Cup Professional Latin Rising Star Championship. On October 20, 2007, she won the Role Model Award at the 7th Annual Filipino American Library Gala. She also won the Viewer’s Choice Award for Favorite TV Personality at the 2008 Asian Excellence Awards. She was also the winner of Dancing with the Stars season 2 and season 3.