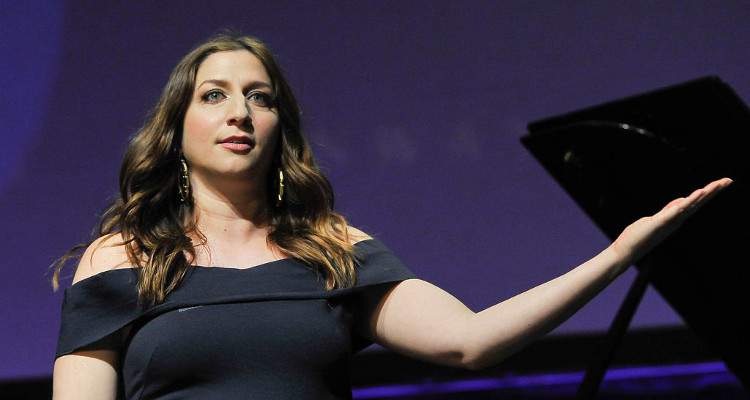 Chelsea Peretti is an accomplished comedian, actress, and writer who has worked in both New York City and Los Angeles and built a strong career for herself in entertainment. She is best known for her work on the police comedy series Brooklyn Nine-Nine and her appearances on podcasts and TV shows. She is married to actor, comedian, and filmmaker Jordan Peele with whom she “eloped” and later became the mother of their son Beaumont Gino Peele.

On January 7, 2018, at the Golden Globe awards ceremony when the cameras panned on Chelsea Peretti she was busy checking her cell phone. She later clarified that she wasn’t rude but just checking the time to figure out when to break out her breast pump. Trust the iconoclastic actress to do things her way oblivious to what the world wants her to do.

That’s exactly why Chelsea Peretti is such an original in the clone prone Hollywood crowd. Chelsea Peretti is an American comedian, actress, and writer who is famous for playing the role of Gina Linetti on the police comedy series Brooklyn Nine-Nine on Fox. We bring you some details from Chelsea Peretti’s wiki.

Born on February 20, 1978, in Contra Costa County, California, to a Jewish mother and a Christian father, Chelsea Peretti’s age is 39 years. After attending The College Preparatory School in Oakland, California, she moved to New York City in 1996 where she studied at Barnard College and graduated in 2000.

Also Read: “Get Out” Gets 100% on “Rotten Tomatoes!” Why Are Fans Freaking Out Over This Film?

She then moved to Los Angeles and started making appearances on programs such as The Sarah Silverman Program, Louie, TruTV Presents: World’s Dumbest… and Tosh.0. In July 2010 Peretti was selected in a “Ten Comics to Watch in 2010” list by Variety magazine. She wrote six episodes of the TV show Parks and Recreation from 2011 to 2012.

Peretti has made several guest appearances on podcasts like Doug Loves Movies; You Made It Weird with Pete Holmes, How Did This Get Made?, The Todd Glass Show and Comedy Bang! Bang! Peretti launched her own call-in podcast Call Chelsea Peretti in October 2012.

Peretti achieved big fame when she became a series regular on Brooklyn Nine-Nine from 2013. That’s also the year when she started dating the actor, comedian, and filmmaker Jordan Peele to whom she later got engaged in November 2015. She became Jordan Peele’s wife when she announced on Instagram that she and Peele had “eloped” on April 26, 2016.

i forget who makes this sweater but what a masterpiece #BROOKLYN99 tomor ***UPDATE!!! Its by @xirena_ ***

Jordan Peele and Chelsea Peretti became proud parents of a baby boy named Beaumont Gino Peele on July 1, 2017. Peretti has also acted in a few movies such as Twisted Fortune, Guy Talk, Women Aren’t Funny, and Popstar: Never Stop Never Stopping and her latest film Game Night is currently in post-production. Peretti is always working and as long as she is around the laughs are never going to stop!