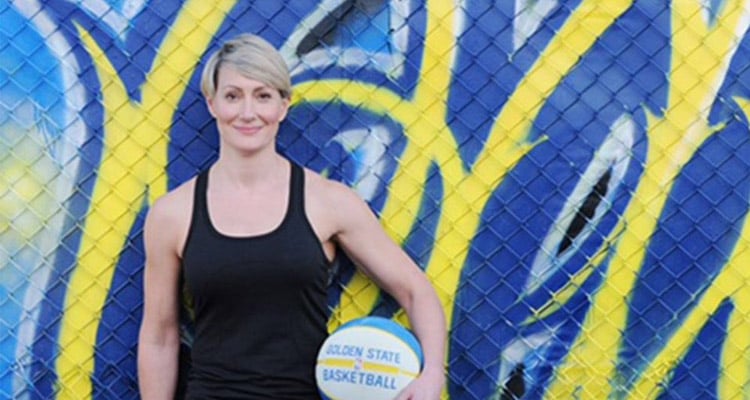 Chelsea Lane has been a sports physiotherapist for almost 18 years now. She was the head performance therapist for the Golden State Warriors, up until just recently that is. Now, she will join the Atlanta Hawks as Executive Director of Athletic Performance and Sports Medicine. If you want to know more about the woman the team lauded as more than just their “therapist,” we’ve got all you need to know. Chelsea Lane’s bio is an interesting one, and the Warriors are truly sad to see her go.

Chelsea Lane Was Born in a Small Town in Rural Australia

Lane was raised in a small town located in rural Australia with a population of 6000 people. From a very young age, Lane was inclined towards sports. In fact, sports was an important part of her small-town life.

When she was a kid, she dreamed of going to the Olympics. But, the fact is, she was not a very good athlete.

While her parents understood Lane’s love for sports, they encouraged her to get an education and a degree first and foremost. At the age of 11, Lane was presented with an opportunity to take part in an entrance exam to attend a selective academic boarding school in Sydney, Australia.

Initially, she was scared and nervous to move to a city on her own at the age of 12. After Lane started studying there, she focused on sports, but her studies were still her priority. Lane enjoyed studying science and problem-solving most.

Lane attended the boarding school for six years. She then had to take on several part-time jobs to pay for her University fees.

With her decorated scholastic resume in the field of sports sciences, Lane decided to work in sports therapy and sports performance. For a year, Lane was a volunteer with Lovelace Health System.

She decided to work in Sydney and traveled the world while working in different elite sports programs. In 2006, Lane moved to New Zealand and worked with High-Performance Sports New Zealand as the lead sports physio for Athletics New Zealand.

For 18 months, Lane worked as the lead physiotherapist for the New Zealand national track and field program.

She also traveled to the 2015 IAAF World Championships in Beijing, China. “It was then that her life with the famous basketball team began.

Her Beginning with the Warriors

When they were a couple of weeks out from the Athletics World Champs in Beijing, she got a letter from Golden State Warriors to discuss an upcoming role.

Although Lane had no clue about the team, she eventually landed the job and quickly moved to the USA! In 2015, Lane joined Golden State Warriors as their head performance therapist.

Lane was to ensure that the athletics got what they wanted, and that the right tools were there to reduce the risk of their injury, illness, and to improve their physical performance.

If any player was injured, it was her job to fix what was broken. She also had to get in touch with the performance staff to communicate about their return to play in the game.

But according to players like Stephen Curry, she was so much more than just their “physiotherapist.” During the season, Lane worked closely with star player Stephen Curry because of his ankle and knee injuries. In an interview, Curry called her “the whole package,” citing instances where she was both the team’s mental and physical therapist.

Other players on the team felt the same, including Andre Iguodala. “She’s like a shrink to us,” Iguodala explained.

“A psychologist to us for real. And that isn’t her job description, either. But she sees how regularly we are dehumanized. People don’t even see us a human. They see us as machines.

Our bodies no longer belong to us and there is disregard for our emotions, our feelings, our desires. But she knows how wrong that is and the effect it has on us,” he added.

And Lane loved working for them, too! (And not just for the many perks that come with working for the NBA, including things like receiving free shoes and athletic wear!) Lane has worked with players such as Kevin Durant, Draymond Green, Klay Thompson, and Stephen Curry. It gave her great joy to be the go-to woman whenever any type of injury presented itself.

But recently, it was announced that Warriors’ Head Performance Therapist confirmed the news that she was leaving Golden State Warriors after three seasons.

She has taken up the role of Executive Director of Athletic Performance and Sports Medicine with the Atlanta Hawks, instead. Having been with the team for the past three years, she was considered as the “Dubs” real MVP.

Lane was the fourth person to lead the staff since 2010, so this news has people scratching their heads over why the Warriors have such a high turnover rate.

According to reports, Lane’s mother was a high school graduate, who worked in retail. Her father immigrated to Australia ten years before she was born. Her dad used to work on the farm.

Matthew Dallow is a 46-year-old former New Zealand bobsledder. He participated in the two-man event at the 2006 Winter Olympics, and has now himself become a performance coach.

Dallow used to play rugby during his sophomore year of college at the University of Arizona. However, a knee injury ended his rugby career. He practiced decathlon.

He then played for the U.S. National Seven amateur team and also professionally for the Harlequins of London. In 1999, Dallow played sevens rugby for the USA. He then worked as the Head Performance Coach for the New Zealand Rugby team and later on became a performance coach & event group lead for Athletics New Zealand.