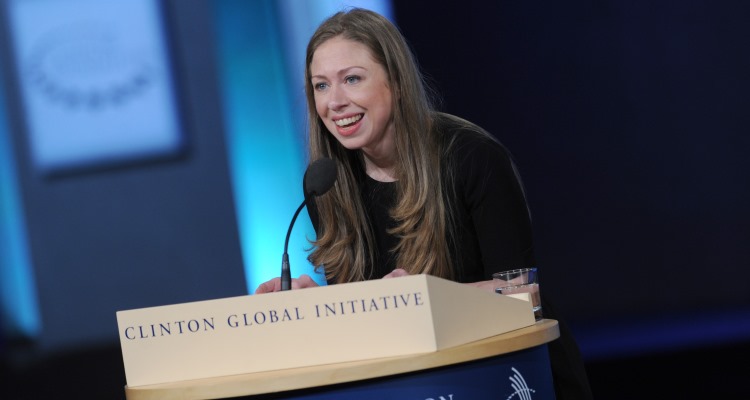 Chelsea Victoria Clinton was born in Little Rock, Arkansas, on February 27, 1980, making her 36 years old. Her name was taken from the song, “Chelsea Morning” by Joni Mitchell, heard during a trip by her parents to the Chelsea neighborhood of London, England in 1979. In 1993, after Chelsea Clinton’s father, Bill Clinton, became President, she moved into the White House. She was raised as a Methodist like her mom (her dad’s a Southern Baptist). It’s noted that her parents always made time for her despite their heavy political schedules, Bill already having been the Governor of Arkansas when she was born; he even had a small desk for her in his office! Cute!

If you think there are a lot of people asking, “Who is Chelsea Clinton?” now, imagine how many there were when Bill Clinton became President! Wanting Chelsea to have a normal childhood–as normal of one a person can have when their dad is President, anyway–the Clintons asked the media to leave their daughter alone, limiting coverage of her to public appearances with her parents; the world didn’t need a Chelsea Clinton wiki just yet. Journalists and media personalities largely agreed, though some felt she was no longer off-limits once she turned 13. Chelsea Clinton’s father and mother also moved her from a public school to a private one, being forced to publicly defend their decision by saying that she would have, “more control over her destiny” at a private school, away from publicity. Chelsea’s choice of a post-secondary institution also received a lot of press coverage.

Chelsea Clinton’s husband is Marc Mezvinsky. He is an investment banker who was raised as a Conservative Jew and possesses a B.A in Religious Studies and Philosophy from Stanford University. Clinton and Mezvinsky met in 1993 as teenagers at a Democrat political retreat in Hilton Head, South Carolina, though their relationship did not begin until 2005. The couple married in 2010 in New York, which is where they reside. As for Chelsea Clinton’s children, the couple has two: Charlotte, born in September 2014, and Aidan, born just last month. The children’s grandmother, Hillary Clinton, is noted for being very doting on her grandkids, often acting as babysitter (maybe not so much lately, what with the campaigning and all), as well as signing and playing with them.

A friendship that may get very awkward following Chelsea Clinton’s DNC speech, Hillary Clinton’s daughter is actually friends with Ivanka Trump, one of the children of her mom’s current rival, Republican candidate Donald Trump. In a recent interview with People Magazine, Trump acknowledged that while, “there’s certainly tremendous intensity around both of [their] lives right now,” she and Clinton are still friends, having met when their parents were on better terms, and not competing for the most powerful job in the world. The campaigns and mudslinging have definitely posed a threat their bond, but they both feel that friendship is more important. They agree tha there’s no reason for there to be bad blood, especially when it was a given that each would be supporting their respective parents in the election.