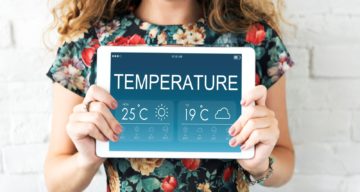 Chelsea Ambriz is a popular anchor on WeatherNation with a rising career. Now, this broadcast meteorologist is moving on to the next big step. After some speculation, Chelsea Ambriz confirmed she is leaving WeatherNation in August 2022. Her longtime followers naturally want to know where the weather anchor is going and if they will see her on broadcast TV again. Ambriz’s colleague initially announced the news of her departure. The meteorologist recently provided answers about leaving WeatherNation herself.

Indiana native Chelsea Ambriz earned a BS in Atmospheric Sciences and Meteorology from Purdue University in 2014. After she graduated, she was a volunteer forecaster for the campus’ WBAA radio station and on-air host and meteorologist on Fast Track, a weekly half-hour news program produced by students.

Ambriz then studied overseas at Tsinghua University and Hong Kong Baptist University. She was granted a Certificate of Entrepreneurship and Innovation.

When she returned to the U.S., Ambriz attended the University of Denver. She received an MS in Environmental Policy and Management in 2020.

Ambriz began her professional career as a broadcast meteorologist at Jackson, Tennessee’s WBBJ-TV in 2015. She left the station in 2017 to work as a meteorologist at West Virginia station WSAZ-TV before moving to Denver, Colorado, in 2019 to join WeatherNation.

The talented weather forecaster has been part of the WeatherNation team since then. She was the national headline morning meteorologist bringing all the latest forecasts to WeatherNation viewers.

Cat’s out of the bag… PC broke the news before I could and surprised me with a goodbye on-air!

Today is my last day at @WeatherNation!

Stay tuned for where my next adventure is – I will keep everyone posted! https://t.co/BwV1vNw734 pic.twitter.com/7NFqJbxrMA

Ambriz’s WeatherNation colleague, Patrick Crawford, announced via his Twitter page on August 3 that she was leaving the network. While viewers were speculating if the news was true, Ambriz announced that August 3 was her last day at WeatherNation.

She gave a heartfelt farewell on-air to her viewers of three years and also expressed her gratitude to her colleagues and viewers on social media. Ambriz hinted she is moving on to a new job. She hasn’t revealed where she is going next but will reveal it soon. So keep your eyes peeled on Chelsea Ambriz’s social media for updates on her career.