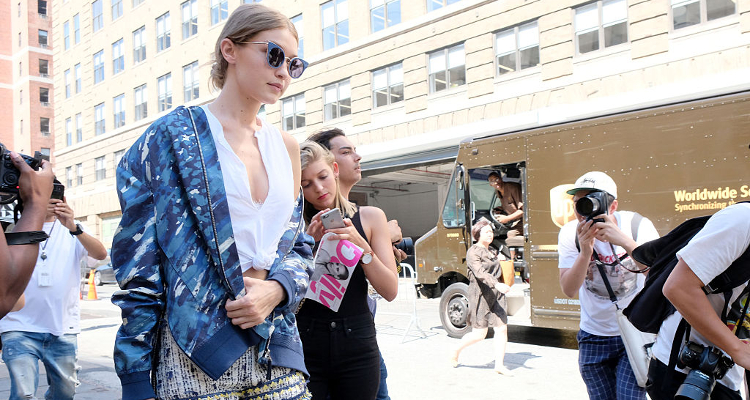 Gigi Hadid is making waves in the fashion world. From designing a collection with Tommy Hilfiger, to her transformation in the latest photoshoot for Max Mara, Gigi Hadid is turning more heads each day. Check out the Victoria’s Secret model’s amazing pics right here.

Gigi Hadid and Tommy Hilfiger turned Venice Beach, California into “Tommyland” to release the spring collection for their collaborative collection, Tommy X Gigi. Hadid attracted a host of socialites and celebrities to the show, who all praised her exquisite collection. Hadid is climbing the fashion ladder, becoming one of the top new icons in the industry. The 21-year-old is famous for her chameleon-like transformations at photoshoots. She shared pics from her latest photoshoot with the Italian high fashion brand, Max Mara on her Instagram and she’s almost unrecognizable! Check out Gigi Hadid’s trendsetting fashion pictures right here.

On Monday night (February 13), Gigi Hadid took to Instagram to give fans a glimpse of her new ad campaign with Max Mara. Zayn Malik’s girlfriend tagged the people behind her stunning transformation for this campaign’s look. In this picture by Steven Meisel, Hadid is upside-down wearing a black pantsuit, her elevated legs wrapped in semi-sheer skin-tight pants, while she holds a Max Mara handbag against her knee. Steven Meisel is the famous photographer friend of Madonna who has shot several photo spreads for U.S. and Italian Vogue. 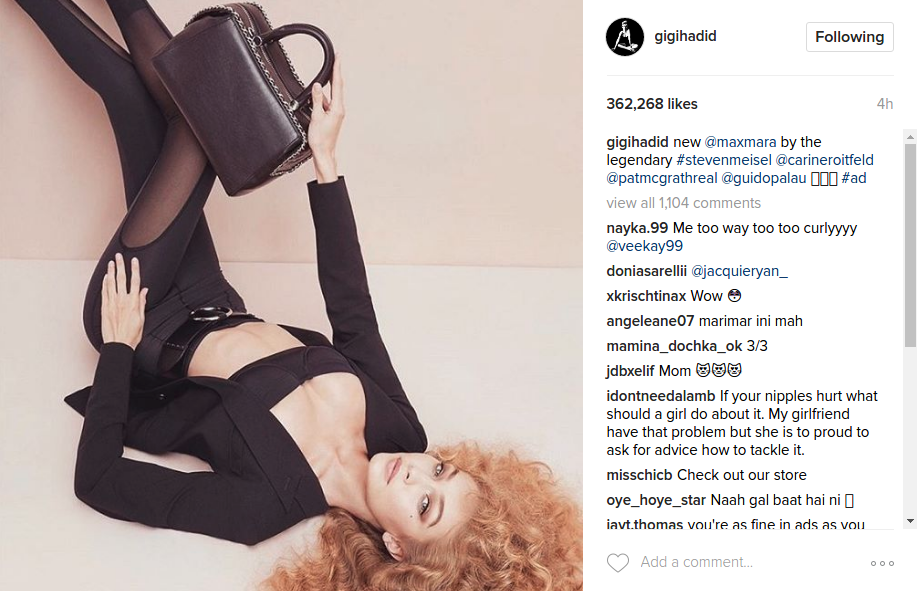 The concept behind the shoot and Hadid’s chameleon-like transformation probably has to do with Carine Roitfeld. The former model was the editor-in-chief of Vogue Paris before she launched her own fashion magazine, CR, and is also the global fashion director of Harper’s Bazaar. She also doubles as a style consultant for various fashion brands’ photoshoots, including Max Mara.

We can’t get enough of Hadid’s new stunning look, which is different from her everyday street-style aesthetic. The people behind her transformation are the top hair and makeup artists in the world. Pat McGrath was called one of the most influential makeup artists in the world by Vogue and is behind Hadid’s flawless smoky-eye look. The trendsetter of hairstyles, Guido Palau, turned the model’s gold locks into Marie Antoinette-inspiring voluminous curls.

Lately, fashion commentators can’t get enough of Gigi Hadid’s effortless high fashion style. She was recently spotted in New York looking picture perfect in a patchwork fur coat, and her fans are in love with it. With the way she’s going, Gigi Hadid might become the next urban goddess of fashion!