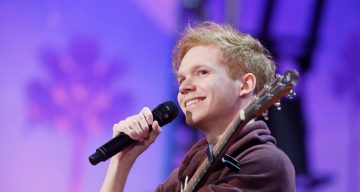 If there’s one thing we’ve learned from Grace VanderWaal, it’s that everyone loves talented songwriters. Chase Goehring came to America’s Got Talent with an original composition and a little surprise. It got the audience applauding, and the judges had nothing but praises for the young songster -who can rap just as well as he sings!

“I know you’ve been hurt by the way that he talks to you/ Hurt by the way that he fights with you/ Hurt by the way that he loves you…” If these lyrics are stuck in your head right now, join the club. “Hurt” by Chase Goehring made the audience and judges in America’s Got Talent smile and stare in awe at his soft, beautiful voice. That is, until he broke into a rap and shocked everyone even more with how well versed he was spitting out rhymes! Everyone’s comparing him to singers like Ed Sheeran and Charlie Puth —and for good reason! It might be too soon to call it, but…can we call it? Take a look at Chase Goehring’s wiki to learn more about the potential winner of AGT!

Who is Chase Goehring?

“Just a lil ginger boy and his guitar,” at least, that’s what he writes on his Instagram. He comes from a small town called Nolansville in Tennessee. The music prodigy was a regular student, taking piano lessons in his spare time. He began pursuing music when he was in high school.

Also Read: Angelica Hale Wiki: The Story of a Brave Girl on “America’s Got Talent”

He taught himself to play the guitar and ukelele! (Anyone else getting Grace VanderWaal feels?) Goehring began writing songs and recording covers, which he then uploaded on YouTube where he became very popular for his blend of singing and rapping. He became an Internet celebrity and toured with Magcon and other Internet sensations, Jacob Whitesides and Taylor Caniff.

Interestingly, AGT isn’t the first time the 21-year-old sang on TV. He won a singer-songwriter contest by YouNow, a live streaming site. Through the contest, he auditioned for The X-Factor U.S. Season 3. He also sang his original song “Hurt” and made it to the four chair challenge.

“I actually didn’t plan on auditioning for The X Factor,” said a then 17-year-old Goehring. “I was participating in a younow.com singer/song-writer competition and one of the judges worked with Sony Music. She was like, ‘We think you would be a great addition to the show.’ So a couple weeks later I ended up in Long Island, New York and auditioned for the judges.”

Chase Goehring has a YouTube channel, where he shares videos of his covers as well as several of his originals. He composed and sang songs like “What is Love,” “Becoming Me,” “A Capella,” and more. And, of course, his songs include a little bit of rap, as well!

I see her in a smokey room…. My new single is available on iTunes (link in bio) and Spotify ALL over the world now! This has been such a long work in progress and I'm extremely excited that another one of my songs is out there for you all to listen to! Big thank you to everyone that helped make this possible and to my incredible fanbase for sticking by my side through all the songs. My love goes out to all of you ❤ #WhatIsLoveOniTunes #WhatIsLoveOnSpotify If you get the song be sure to screenshot and post it! I'll be watching all day long:)

He composed and sang “Christina” as a tribute to Christina Grimmie. The Voice contestant passed away tragically after being shot while signing autographs after a concert in 2016. Goehring is inspired by different YouTube musicians and Grimmie was one of them.

Also Read: Colin Cloud Wiki: Everything You Need to Know about the Real Life Sherlock Holmes

Relive his audition and listen to “Hurt” by Chase Goehring once again. This time, sing along with the lyrics here. America’s Got Talent airs every Tuesday at 8 p.m. EST on NBC.