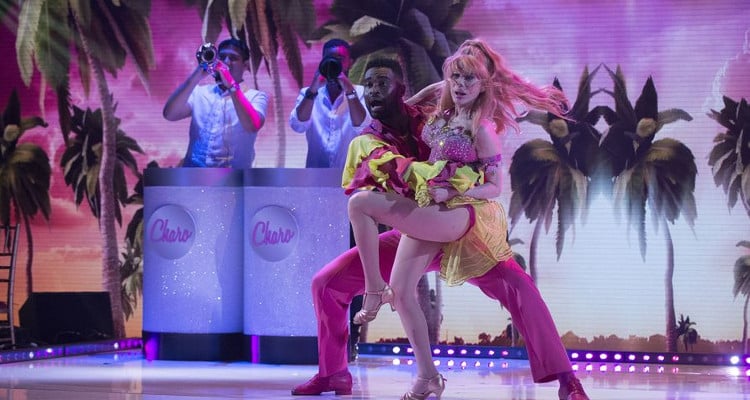 Charo is bringing her flamenco flair to the ballroom! The Spanish songstress is competing for the Mirrorball Trophy on Dancing with the Stars season 24 with pro-partner, Keo Motsepe.

How well do you know Charo? You’ll be seeing a lot of the multi-talented artist, now that she has joined the Dancing with the Stars 2017 cast. She is all set to dominate the new season with her pro-dance partner, Keo Motsepe. Funny and deadpan as ever, she’ll charm you into voting for her, and not just with her catchphrase, “Cuchi Cuchi!”  Find out more about this super-amazing woman in Charo’s wiki, right here!

There are Different Stories About Her Early Childhood

Charo was born in the Region of Murcia in Spain. If you’re wondering if Charo is her stage name, you’re right! Her real name is María del Rosario Mercedes Pilar Martínez Molina Baeza. (We’re glad she’s sticking with Charo.) The story behind her stage name is unknown, but we love it! It suits the vibrant actress, comedian, and flamenco artist. She has toured all over the world and has appeared in various shows and films. After decades of entertaining people, she has earned a net worth of $8.0 million.

Some accounts of her early life are disputable. Her father was reportedly a lawyer who fled to Casablanca during the dictatorship of Francisco Franco. Charo stayed behind with her mother in Murcia, who raised her children alone. Varying accounts claim that she was enrolled in a convent, where a nun told her she was made for showbiz. Charo’s grandmother hired a music professor to teach her guitar, and was the first male to enter that convent. Another account says she studied classical and flamenco guitar in a school for underprivileged children, founded by Andrés Segovia in Madrid.

Her Real Age Will Also Leave You Confused

Charo is the oldest contestant this season of DWTS, but her age is still a matter of contention. That’s because her date of birth is unknown and there are way too many variations —some from Charo herself! Certain sources calculate her age to be around 66 years old, though there are some estimating her age as high as 76!

Official documents in Charo’s birthplace of Murcia (including her original Spanish passport and her naturalization papers) state that her birth date is March 13, 1941. However, after immigrating to the U.S., Charo said on two different occasions that she was born in 1947 and 1949. She then asserted in a court hearing that her passport and naturalization papers were wrong, and that her real year of birth is 1951.

When she married her then 66-year-old husband, Xavier Cugat, in 1966, media outlets claimed that she was 20. But Charo revealed her parents had allowed her to falsify her age, so she could marry the older man. In 1977, when she filed for divorce from Cugat, she upheld the 1951 birth date.

Funny as ever, Charo finds the dispute over her age advantageous. “But if people really believe I’m older, that’s fine. Don’t be surprised if I come out with my own cosmetics, a new energy bar and maybe some vitamins,” she quipped. Never change Charo, never change.

Also Read: Simone Biles Wiki: Everything You Need to Know about the “Dancing with the Stars” Contestant

She Married a Much Older Man

The 5’4″ dynamo was discovered by the bandleader, Xavier Cugat during her teens. She would later go on to marry Cugat, who was reportedly 66 years (old at the time) and had been married four times before. News outlets reported that Cugat couldn’t convince church authorities that his two divorces should not be counted against him as he wasn’t married in church, and he married Charo in Caesar’s Palace, Las Vegas.

Charo later filed for divorce the same year she became a naturalized citizen. She toured with his orchestra around the world and starred in TV shows, and later claimed the marriage was a business contract so Cugat could bring her to the U.S. where he lived.

She later married producer, Kjell Rasten and their only son, Shel Rasten was born in 1982. Shel is a singer, actor, and drummer who played for the heavy metal band, Treazen. Her son’s Instagram shows that he’s super-outdoorsy and into performing, just like his mother.

Me and @marcolesher on the way to watch mama @officialcharo on @dwts we dash!

Her Catchphrase Isn’t What You Think

Charo began making appearances with Cugat’s orchestra on TV shows, including Laugh-In hosted by comedians, Dan Rowan and Dick Martin. Her complete lack of fluency in English became the main focus of the end of the show. It was around this time she started saying the words “Cuchi Cuchi,” which became her signature catchphrase.

But contrary to what some dirty minds think, it’s nothing sexual. In fact, “Cuchi” has a cute and completely non-sexual origin. She explained the meaning of her catchphrase when she appeared on OWN, “Cuchillo [knife in Spanish], that was the name of my dog. He was a mix between a St. Bernard and a pit bull. I make a joke about that. First, he bites you and then he runs for help. But I call him ‘cuchi cuchi.’”

Dancing with the Stars season 24 will air every Monday at 8:00 p.m. EST only on ABC.  #TeamCuchiCuchi for the win!