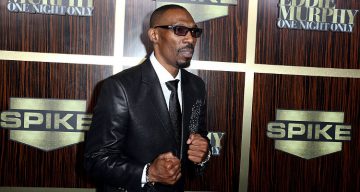 The world of comedy mourns the loss of one of its greats. Charlie Murphy, the famous comedian, passed away on Wednesday. He is well known for his work on The Chappelle Show and being the elder brother of Eddie Murphy.

It’s a sad day for the world of comedy. Charlie Murphy, the gifted comedian, passed away on Wednesday (April 12). His sudden death has shaken actors and comedians alike. He lived an illustrious life making people laugh with his work. To celebrate his glorious legacy, we’re sharing details from Charlie Murphy’s wiki, including information on exactly how Charlie Murphy died.

Murphy began his career with minor acting roles while working in the backstage crew of hip-hop duo, K9 Posse. He’s also credited as an executive producer of a couple of their songs. His first major role was portraying the antagonist, Gusto in the 1993 Chris Rock film, CB4.

His big break came through The Chappelle Show on Comedy Central by noteworthy comedian, Dave Chappelle. He became famous for his Charlie Murphy’s True Hollywood Stories sketches on the show, where he reenacted his encounters with celebrities. When Chappelle pulled the plug on the show, everyone wondered where the cast would go. But Murphy became a legend in comedy. He authored three books in his lifetime and went on a nationwide stand-up tour.

Murphy has acted in several movies, including a small role in Night at the Museum. His other acting credits include King’s Ransom (2005), Lottery Ticket (2010), Meet the Blacks (2016) and more. He also wrote screenplays for his brother’s movies such as Norbit. He amassed a net worth of $2.5 million in his career. In comparison, his brother, Eddie Murphy with his net worth of $85 million and Dave Chappelle with $45 million are touted as some of the richest comedians in the world.

Who is Charlie Murphy?

Charles Quinton Murphy was born to Lillian and Charles Murphy Sr. He and his little brother, Eddie are from Brooklyn, New York. Their mother was a telephone operator while their father was a transit police officer, who performed as an amateur comedian. As a teenager, Charlie is said to have spent 10 months in jail.

The day he got out of jail, he signed up for the United States Navy. He did it so he wouldn’t fall into a life of crime like some of his peers and he said it was the best decision he ever made. After working in the U.S. Navy for six years as a boiler technician, he said, “I got my first apartment, my first marriage, my first bank account, my first car… it all happened there.” While in the Navy, he witnessed the 1983 Beirut Barracks Bombing.

Murphy learned how to write screenplays so his younger brother could star in them. “The very first movie that I ever wrote was called The Peddler. It was written in 1986 and it sold to Paramount for a hundred and fifty thousand dollars,” he said. Writing films worked out well for the Murphy brothers.

Charlie Murphy was a famous, or rather infamous, member of Eddie’s crew. Charlie, fiercely loyal to friends and protective of his brother, is known to have assaulted people who have hurled insults at his brother. The younger Murphy even had to remove Charlie from his crew because he wanted to start a fight with people who booed Eddie at his shows.

He never felt like he lived in his little brother’s shadow saying, “My life was what it was. I was always proud of my brother. He helped me tremendously, but we’re family so we were never in his shadow.”

He Lost His Wife to Cancer

Charlie Murphy met a woman named Tisha Taylor on a boat when she was with her friends, and it was love at first sight for him. He asked her out that night and brought her to Eddie’s house where his family was, and introduced her to them as his “future wife.” As luck would have it, the couple married in 1997 and had two children together.

Their son, Xavier is 18 years old now and their daughter, Eva is 11. After 17 years together, their marital bliss was cut short, after Taylor was diagnosed with cervical cancer. Murphy also has a son from a previous relationship, who’s now 31 years old.

Taylor battled her cancer for two years, but lost in 2009. She passed away in her sleep at the family’s New Jersey home at the age of 40. Her death impacted Murphy and his children greatly. After she had passed away, he tried to spend more time with his kids, who were 11 and four at that time of her death.

Charlie Murphy and his beautiful wife, Tisha Taylor, who passed away too soon herself in 2009. pic.twitter.com/XvAibUlaAe

How Did Charlie Murphy Die?

Charlie Murphy passed away on Wednesday (April 12) morning after an ongoing battle with leukemia. He was 57 years old. His death came as a shock to his family, and many of his loved ones especially since his health was improving. The comedian was undergoing chemotherapy treatment in New York City hospital where he passed away. Murphy even joked to his family that they called him too much. He was even tweeting on Tuesday.

One to Sleep On: Release the past to rest as deeply as possible.

The family issued a statement after his death saying, “Our hearts are heavy with the loss today of our son, brother, father, uncle and friend Charlie. Charlie filled our family with love and laughter and there won’t be a day that goes by that his presence will not be missed. Thank you for the outpouring of condolences and prayers. We respectfully ask for privacy during this time of great loss for all of us.”

Condolences have been pouring in from social media, including from celebs like 50Cent, Kevin Hart, Bow Wow, Ludacris, Chris Rock, The Weeknd, Zendaya, and Gabrielle Union. These are some of the many artists grieving the loss of this comedic legend.

RIP Charlie Murphy and thanks for the many laughs.

We just lost one of the funniest most real brothers of all time . Charlie Murphy RIP. pic.twitter.com/AAwItp5AJC