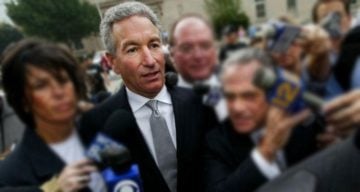 Charles Kushner was one of the most respected real estate tycoons in America, before his illegal activities earned him a prison sentence. After being released, Kushner is back to managing his real estate empire. With a net worth of $1.8 billion and his son as the President’s son-in-law, Kushner is sitting pretty once again.

Jared Kushner rarely talks about his father, and for a good reason. Charles Kushner has spent time in jail after being convicted of illegal campaign contributions, tax evasion, and witness tampering. Kushner was convicted in 2005 and was sentenced to two years in prison. He was released on August 25, 2006, and resumed his career in real estate shortly after. Jared Kushner’s father founded Kushner companies in 1985. People are curious to know about Charles Kushner’s net worth, so we will tell you this and more from Charles Kushner’s wiki.

Survivors of the Holocaust

Charles Kushner was born on May 16, 1954, to Joseph and Rae Kushner. He was raised in Elizabeth, New Jersey along with his elder brother. His parents survived the Holocaust and came to America from Belarus in 1949. To make ends meet, his father worked as a construction worker, builder, and eventually became a real estate investor. Charles Kushner understood the value of formal education and graduated from the School of Law at Hofstra University in 1979.

Kushner started working at his father’s business. In 1985, he managed his father’s portfolio of 4,000 New Jersey apartments. He founded Kushner Companies and soon became its chairman. Over the next 15 years, Kushner grew the company to over 10,000 residential apartments, a home building business, commercial and industrial properties, and a community bank. In 1999, he won the prestigious Ernst & Young New Jersey Entrepreneur of the Year Award.

The Law Caught up with Kushner

Kushner did not always follow the law in his business dealings. In the summer of 2004, he had to pay a $508,900 fine for contributing to political campaigns in the name of his partnerships, when he lacked the authorization to do so. Kushner was investigated by the U.S. Attorney’s Office for the District of New Jersey and had to plea guilty to 18 counts of making illegal campaign contributions, tax evasion, and witness tampering. He ultimately served 14 months at Federal Prison Camp, Montgomery in Alabama. He then had to spend time in a halfway house in Newark, New Jersey to complete his sentence.

A Gigantic Net Worth

Charles Kushner’s children are Jared, Joshua, Nicole, and Dara Kushner, whom he has with his wife, Seryl Kushner. After getting released from prison, Kushner moved his business to New York City. Despite his troubles with the law, Charles Kushner’s net worth is a massive $1.8 billion and growing. Since serving his sentence, Kushner is as ambitious as ever. He said in an interview, “It gave me an opportunity to learn a lot about myself. I learned a lot about other people. I learned a lot about different areas I’ve always had an interest to learn about, whether it be Jewish history or derivative financing. I didn’t waste my time in jail. I was able to read the Wall Street Journal cover to cover every day.”

Changing with the Times

Kushner has donated to charity and opened schools in the memory of his parents. Though he was a donor to the Democratic Party until 2016, he donated to Donald Trump’s campaign as he ran for president. The fact that Jared Kushner is Trump’s son-in-law likely weighed heavily in Charles Kushner’s decision to support the Trump campaign. Though Kushner has been disbarred from practicing law in New Jersey, New York, and Pennsylvania, he is still working to expand his real estate business. Charles Kushner’s success and conviction is a morality tale for those dreaming of making it big.