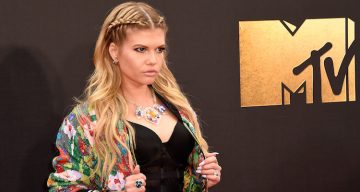 Was Chanel West Coast a guy? The answer is a big, loud, “no!” Last year, rumor debunking site Snopes shot down the idea that the actor who played Boy Meets World’s Stuart Minkus, grew up, transitioned, and became Chanel West Coast. Where did the rumors begin? In 2015, a hilarious social media meme surfaced that suggested that the child actor behind Minuks’ character underwent a sex change operation to become the beautiful actress, Chelsea Chanel Dudley. Although the post was intended to be a joke, many viewers saw the resemblance and took it as a factual report!

All rumors aside, Lee Norris, the actor who played Minkus, actually did grow up as a male and has his own career, completely separate from any connections to Dudley. He went on to play Marvin “Mouth” McFadden on One Tree Hill from 2003-2012 and in 2014-2015, and then also reprised his role as an older Minkus in the spin-off sitcom, Girl Meets World.

The actress herself spoke last year to debunk the rumors, when paparazzi asked her if she had heard about the meme. Dudley began to smirk when the paparazzi asked her the question, and responded, “I feel worse for Minkus than I do for myself because this guy’s got a fully poppin acting career! He was a cop in the movie Gone Girl, and people are saying that he’s me!” She laughed and continued, “People don’t even know he’s alive. They really think he’s transitioned into me so it’s almost like he’s dead in a way, but he’s not. He’s very much alive and he’s acting in movies.” The actress added that she still receives tweets about this question all the time, even from young people. She wants the rumor to die out, and for people to stop tweeting her about it!

Check out the video below to see Dudley’s rumor debunking statements!

What about Lee Norris?

As for Lee Norris, he’s been busy with his own career on One Tree Hill and appearing with small roles in movies, and recently showed support for his female cast members. On Monday, the female cast and crew accused showrunner Mark Schwahn of sexual misconduct. They released a letter statement, and afterwards many male co-stars took to social media to show their support for the women. The open letter read, “Many of us were, to varying degrees, manipulated psychologically and emotionally. More than one of us is still in treatment for post-traumatic stress. Many of us were put in uncomfortable positions and had to swiftly learn to fight back, sometimes physically, because it was made clear to us that the supervisors in the room were not the protectors they were supposed to be.”

Norris responded in a statement saying, “My female friends in the cast and crew of OTH are smart, articulate women, and they are more than capable of speaking for themselves.” He voiced his “complete support” for them and expressed his love and admiration for their strength in opening up about what happened. Although he supported them privately he also felt it was important to release public support, as well.

Much love to our brother bear #LeeNorris, who has always been supportive. He's one of the good ones too. #BurnItDownSis pic.twitter.com/HGzzbrzhKF