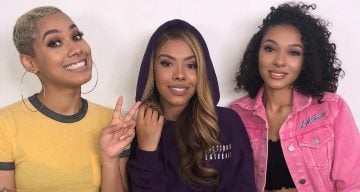 The Ceraadi sisters are currently in the limelight for all the wrong reasons. There has been a rumor going around that one of the sisters, Znuie, is missing. After reading the news, many people have become curious and want to learn more about the sisters.

Who Are the Ceraadi Sisters?

Ceraadi is a girl group that was formed in July 2013, in Los Angeles, California. It consists of three sisters named Emaza Dilan, Znuie, and Saiyr. Their mother, Sandra, is their manager.

The Ceraadi sisters gained more popularity after their appearance on the TV reality series, Christina Milian Turned Up.

Znuie was born on August 18, 1999, which makes her age to be 18. Her Instagram account (@juicynunu) has 281K followers, and she has more than 124K followers on her YouTube channel.

Emaza Dilan was born on January 11, 1998, and she is 20 years old. Besides being a part of the group, Emaza uploads makeup tutorials and videos related to hair care on her YouTube channel.

From a very young age, Emaza was inclined towards dancing and singing. She started dancing when she was four years old and took piano lessons at the age of six. By the age of seven, she was writing her own songs.

In late 2014, Emaza started uploading videos on her YouTube channel. She has more than 293K Instagram followers. 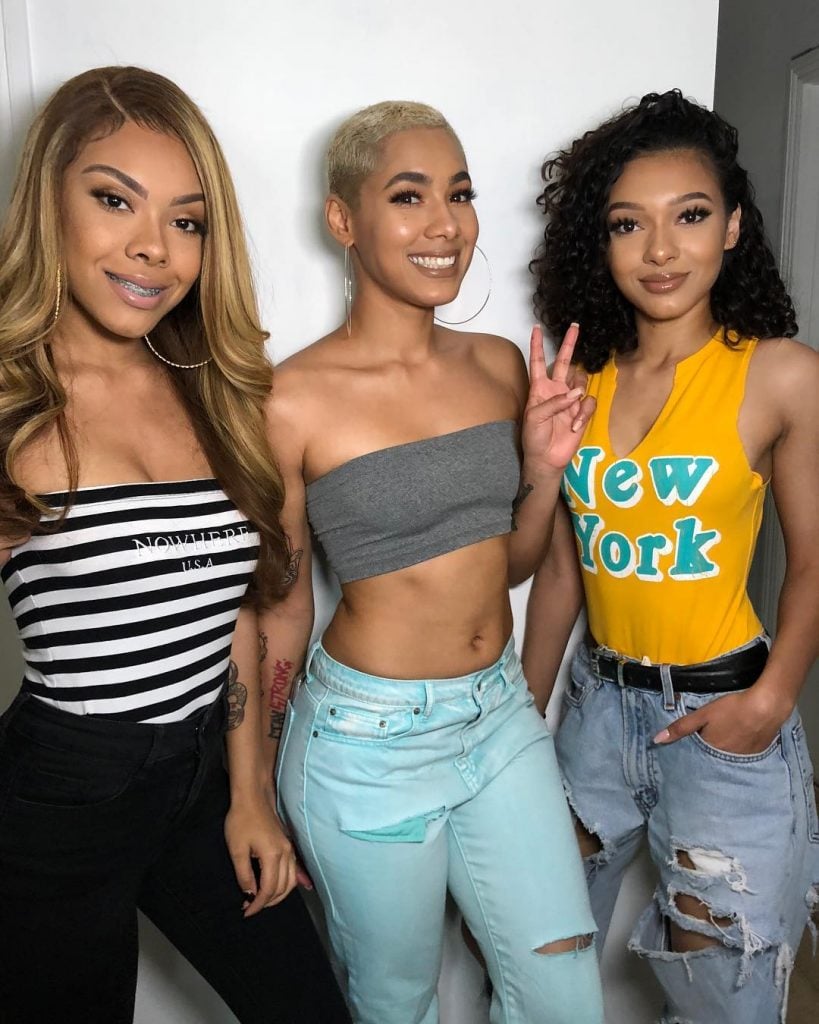 In 2008, the Ceraadi sisters left their hometown of Iowa and moved to Los Angeles to follow their dreams of becoming singers. They have performed at several high schools and have a lot of fan following on various social media accounts.

All three sisters were born in Iowa City. They are of Filipino, Irish, and African-American descent.

Throughout their career, the sisters have released several songs like “Favorite Song,” “That’s Bae,” “Whatever,” and “7/11.”

Ceraadi has recently been trending because of a YouTube video in which Znuie’s sisters are seen crying.

According to the controversy, they and the family feel that Znuie is missing or has been kidnapped.

In the video, Znuie’s mother and sisters went live and claimed that James, who is Znuie’s friend or rumored boyfriend, is with her. Her mother claims that James is controlling Znuie and he won’t let her come back home.

Znuie can be seen replying to the live messages and says that she doesn’t care anymore. Her family can’t believe it’s Znuie and feels that James is forcing her to do and say all this.

Her family believes that she is in Las Vegas.

In the video, Znuie asked her sisters to put her money back in her account. Her mother said that when she comes back home, she will give Znuie her money.

They feel that James is holding her for ransom.

Znuie’s Side of the Story 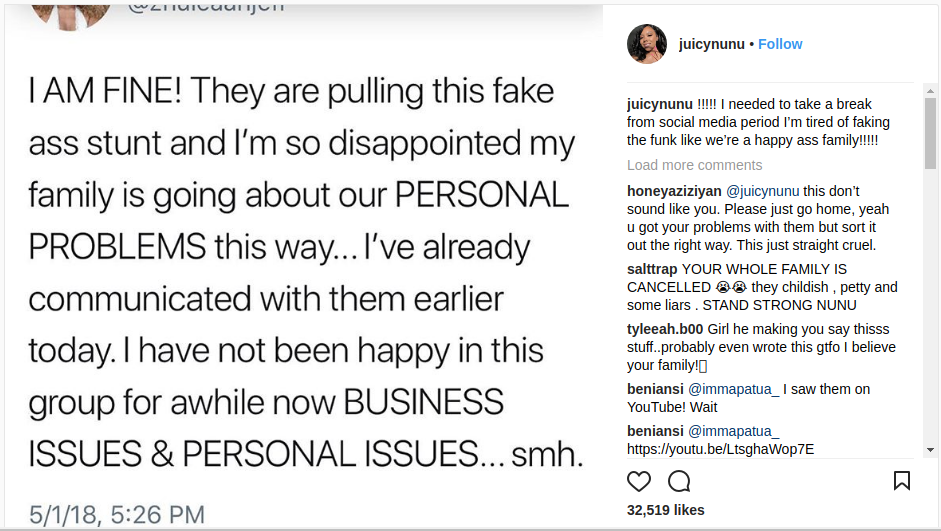 After watching the video, Znuie took to her social media and cleared the air about her rumored kidnapping. Her Instagram post explained that she wanted to take a break from social media for a while.

Znuie told her followers that she is fine and that her family is pulling a publicity stunt. She also said that hasn’t been happy with the group for some time now because of business and personal problems. 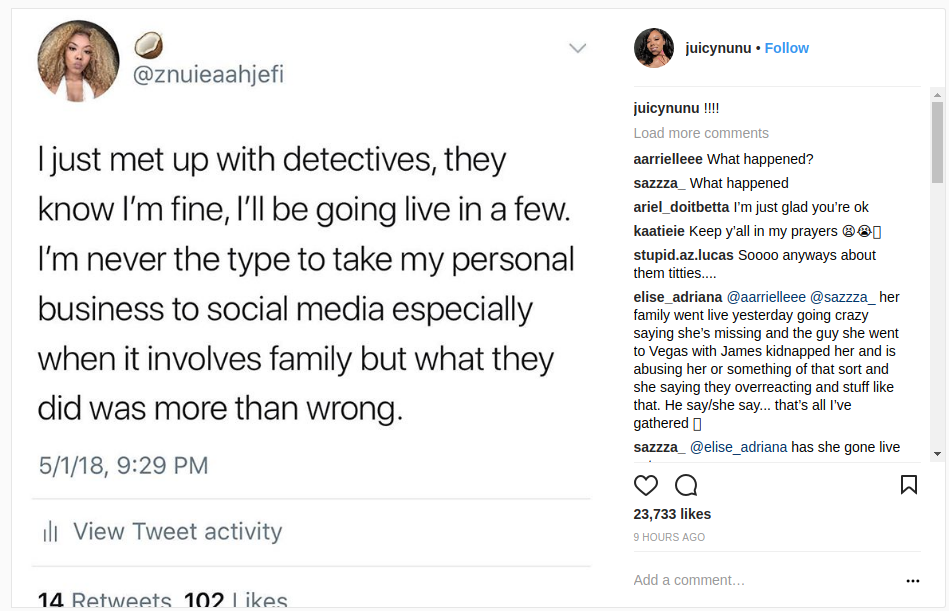 In her second Instagram post, Znuie said that she met the detectives and they know that she is fine.

The 18-year-old explained that she is not the type to talk about her personal issues on social media. She also said that she’s unhappy about what her family did and was not right. 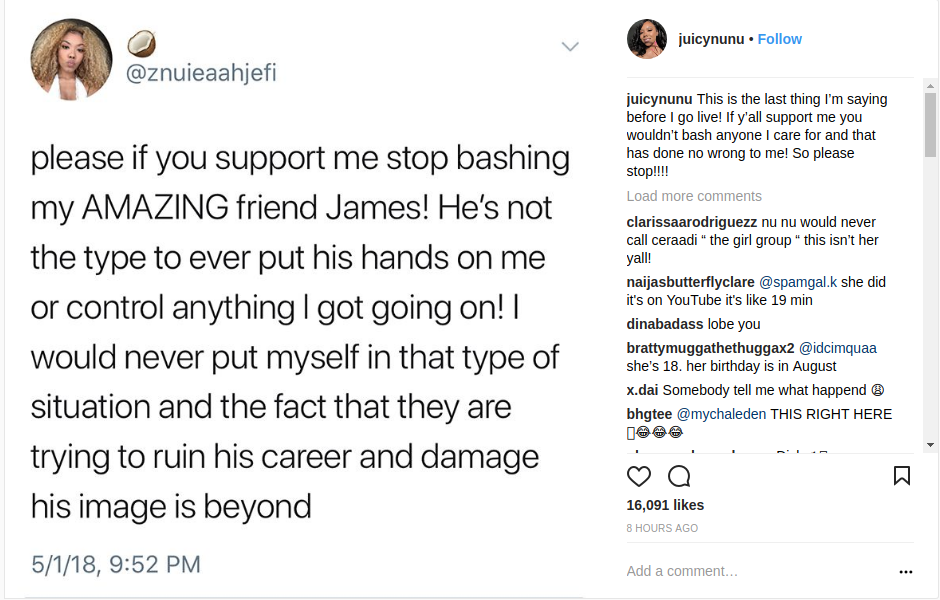 Znuie went on to say that James is not the type to hit her or control her in any way, unlike what her family said. She finds it unbelievable that her family is tarnishing his career and image.

She further said that all that James has ever done is motivate her. And her mom has also had several conversations with him in the past.

A lot of Znuie’s followers feel that it is not her who wrote the posts. Some even asked her to go home and sort it out with her family.

But according to Znuie, she is not kidnapped or held without her consent.

Znuie went live to talk about her situation and clear things up.

In the video, she says that she didn’t run away. She explained that she’s 18 and doesn’t want to go back home.

Znuie also said that if her family’s so worried about her, why are they not answering her phone calls?

She also added that she could have bought her own house, but her family took her money from her account. She further explains that she was kicked out the group and that the family is not happy at all.

Znuie feels that her mother is brainwashing her sisters.

In the live video, she said that her family is upset because she is finally standing up for herself and called the group fake. She assured her fans that she is happy and fine.

Although she’s taking a break from social media, Znuie says that it does not mean that something is wrong with her.

In the comments section of the video, people began to play detective. They feel that she tried to show where she is so that people could get in touch with the authorities.

According to Znuie, she is fine and decided to leave her family and the group. However, her family thinks otherwise.

But, it looks like the arguments have been going on for a while now. Ceraadi’s Instagram account shows that Znuie has already been replaced by their brother, Rsieh-Raxan.