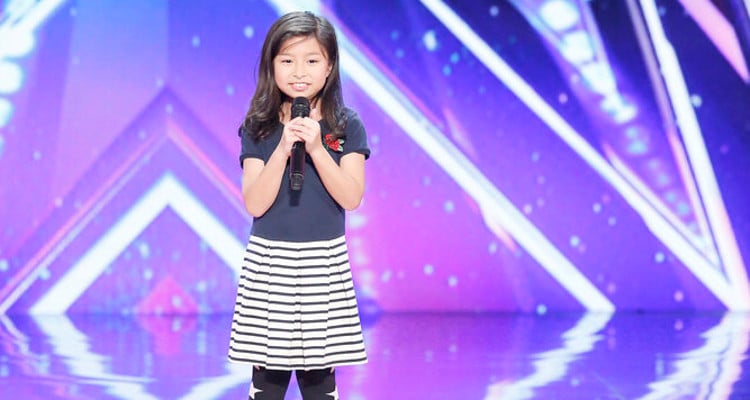 America’s Got Talent has reached Season 12 and is on the hunt for its next big star. The basic theme of the show surrounds American residents who audition in front of four judges, in hopes of winning title of America’s next biggest talent. Some of them are eliminated, while others are selected based on their performance, talent, and how much they entertain the judges, as well as the crowd.

It is truly mesmerizing to see the many people from different parts of the United States take to the stage of America’s Got Talent to showcase their talent. Recently, nine-year-old singer Celine Tam appeared on AGT; her parents and younger sister, Dion, were there to support her, as well. The family clearly seems to be fans of Céline Dion. In fact, the nine-year-old considers the singer to be her idol! Celine Tam sang, “My Heart Will Go On” for her audition, and boy did she wow the judges with her big voice! Read on if you want to know more about Celine Tam from America’s Got Talent.

Celine Tam on America’s Got Talent

This is going on the mantle. #AGT

Born Celine Tam Tsz-Kwan on November 22, 2007, her family is from Canada. Tam’s parents are so in love with Céline Dion’s voice that they decided to name both of their daughters after the Grammy winner. This is not the first time that Tam performed on television. According to reports, she participated in the Hunan’s Broadcasting System’s Show, Let’s Sing Kids in 2014. On that show, Tam sang Secret Garden’s “You Raise Me Up,” made popular by Josh Groban.

Tam’s father, Steve, is a vocal coach and is helping his daughter attain her dreams of becoming a singer. He trained her, and after years of coaching, Tam went on to win trophies and competitions. Additionally, in 2015, she signed a contract with an entertainment label called GME China.

Tomorrow ? Are you ready?

Tam, although very young, has already figured out her career path and seems to be determined to achieve it. Her only dream until now was to appear on America’s Got Talent. She had a charming introduction on stage, as she kept talking about Céline Dion. When judge Mel B. asked her how she discovered her talent, Tam said, “When I was in the car, my dad’s driving and then suddenly I just sang My Heart Will Go On. And then he was like ‘wow.’”

After her audition, Tam earned a standing ovation, not just from the judges but from the audience, as well. She hit the highest notes and her performance was truly mesmerizing. The adorable nine-year-old even has a Twitter account (run by her parents) that shared her excitement about being on AGT and having the chance to perform on the show’s stage.

If you have not watched Celine Tam’s powerful performance on America’s Got Talent, then here is your chance to watch it! Feel free to click below and let us know your opinion about the child singer. Also, don’t forget to watch America’s Got Talent Monday nights at 8:00 p.m. EST on NBC!