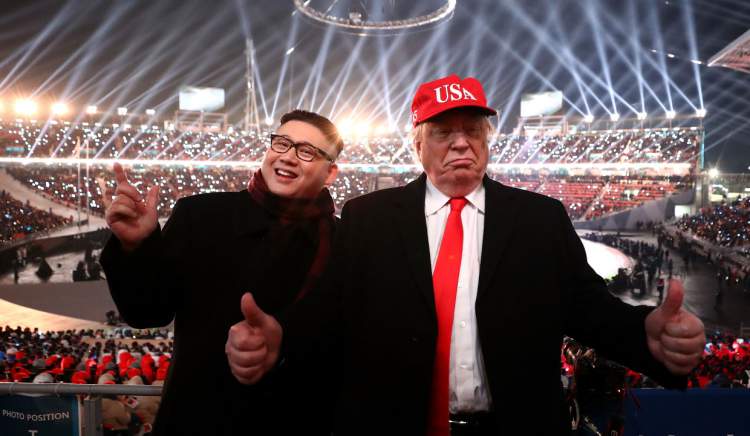 There are a lot of times celebrities and their look-alikes made us do a double take. From Selena Gomez to Kim Kardashian, it seems as though everyone has a doppelgänger! Some have even used their striking similarities to become impersonators. Take a look at some uncanny celebrity look-alikes.

Surely the thought of having a doppelgänger is both intriguing and terrifying. After all, can you imagine bumping into someone who looks exactly like you? Then there are people who pretend to be stars. While some may take it as a compliment, others are not so fond of their impersonators.

Below are some of some celebrity look-alikes who made everyone look twice!

There are a lot of Donald Trump impersonators out there. In fact, one even competed on America’s Got Talent as the singing Trump and made his way to the quarterfinals!

Most recently, a Donald Trump look-alike was seen at the 2018 Winter Olympics. This “Trump” walked through the crowd at the Pyeongchang Olympic Stadium but was asked to leave by security.

Donald Trump was not the only one with a look-alike at the Olympics, but a Kim Jong-Un doppelgänger showed up, too, leaving the North Korean cheerleaders speechless.

The impersonator is an Australian musician named Howard, who said he showed up at the event to promote peace. Well, we don’t know if his message reached people, but we do know he shocked the crowd!

Kate Middleton look-alike Heidi Agan was spotted roaming the streets of New York City back in 2012. Their resemblance was so uncanny that many onlookers thought the Duchess of Cambridge was exploring the city of New York sans security!

Nearly all of New York City came to a standstill when former President Barack Obama’s doppelgänger pranked them by dressing up and hanging out with as fake security entourage at the New York City Times Square.

This one created another controversy when Depp’s look-alike showed up at the premiere of Disney’s The Lone Ranger in 2013.