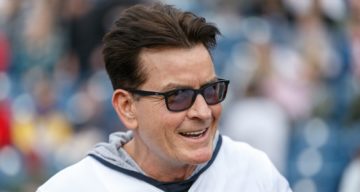 Cannabis use is becoming increasingly legal in the country and there are a number of celebrities who see it as the future. We’re not just talking 420 patron saint, Snoop Dogg. There are celebs who not only are open about using weed, but have also built a business around it with a significant investment in the marijuana industry. Just who are these celebs? Keep reading to find out.

There are weed strains named after Charlie Sheen, but the Two and a Half Men actor claims he’d never gotten a cut of the sales from the use of his moniker. So, he decided to create his own weed brand, Sheenius.

the
time is
near,
the place is
everywhere,
the rumors are
all true!

the
name says
it all.

Sheen recently made headlines talking about his sobriety. The irony of a celeb who came out of drug addiction hawking marijuana is not lost on him. But if his name is already big in the industry, he’d rather attach it to a brand he worked on himself.

In 2019, Martha Stewart inked a deal with Canopy Growth Corp to create a line of pot-based products. The lifestyle mogul and the Canada-based company are working on a diverse range of products made from cannabidiol (CBD) and other cannabinoids.

Canopy Growth $CGC announced Thursday that Martha Stewart would be joining the cannabis company in an advisory role to help drive interest in hemp-derived CBD products. @jimcramer reacts to this news. https://t.co/0R7zXibn9K

The former Canadian Prime Minister joined the board of directors of the New York-based pot company Acreage Holdings (soon to be acquired by Canopy Growth Corp) as soon as the company became listed on the Canadian Stock Exchange. He’s among other politicians on the Acreage board like former Speaker of the U.S. House of Representatives John Boehner and the newly announced Republican presidential candidate, former Massachusetts Gov. William Weld.

The over-the-top Internet personality lists himself as the owner of Green Axis Capital in Los Angeles on his LinkedIn. He has been a part of the company since 2017, while it was announced in 2019 that he was appointed chairman and CEO of its Canadian and global market arm, Ignite International. Bilzerian hopes that the investment firm will be a front-runner in cannabis entrepreneurship in the future.

The EGOT-winning comedian-actress-host recently added one more feather to her cap—cannabis entrepreneur. Together with Maya Elisabeth, a weed industry maven and founder of Om Edibles (an all-female-owned cannabis consumables firm), she launched Whoopi & Maya.