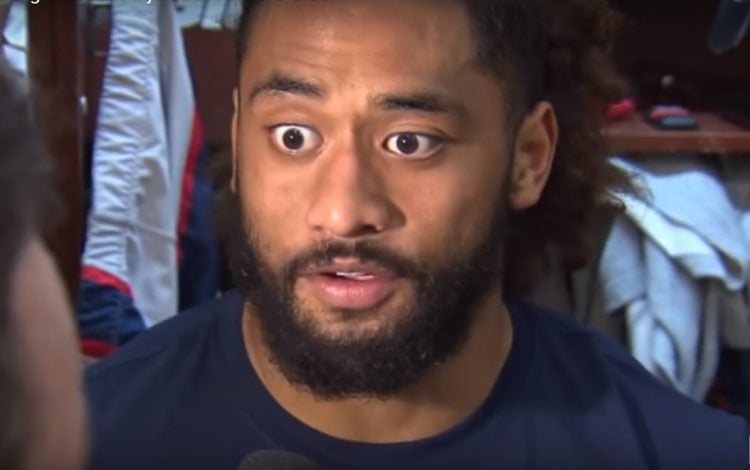 Harvey Langi and Cassidy Langi are both in hospital following a car accident that left them seriously injured. Although the injuries are serious, they are reported to be non-life threatening. Their family, friends, and fans are praying for the couple’s speedy recovery.

Harvey Langi and Cassidy Langi are in serious but stable condition in Boston hospitals. They were injured in a traffic accident a few yards from their apartment in Foxborough, Massachusetts, on Friday night, October 13, 2017.

Harvey Langi is a linebacker for the New England Patriots. Cassidy Langi is Harvey Langi’s wife and was with him in the car when the accident happened.

Harvey Langi’s father-in-law, Rick Wahlin, who rushed to Boston to help the injured couple said, “They are hurt but they are alive and that’s a blessing we are grateful for. They were taken to two separate hospitals, and we are trying to get them at the same facility so that they can recover together.”

Langi’s car stopped to make a left turn into their apartment parking lot when a vehicle traveling at high speed hit the back of it.

The Couple Are Lucky to Be Alive

Harvey Langi is being treated for neck and head injuries. Meanwhile, his wife suffered fractures in both her hips and has broken ribs. She is being examined for possible internal bleeding and injury to her liver and spleen.

Firefighters had to cut into Harvey Langi’s car to remove them. They were taken away in emergency vehicles.

Wahlin said, “They are torn up but very lucky to be alive. All Harvey has cared about is how Cassie is doing, that’s been his biggest concern, and we are grateful for him and all the prayers that have been directed toward our families.”

Cassidy Langi has a bachelor’s degree in elementary education and teaching from Utah Valley University. But she currently works as a licensing specialist in Vivint Smart Home in Pleasant Grove, Utah. The firm that deals with consumer electronics.

She is active on social media and has an Instagram account under the username “cassidylangi10.” It is apparent from the pictures on Cassidy Langi’s Instagram account that she shares a very close relationship with her husband.

Our favorite time of year ??

Langi’s account contains pictures of both her and husband getting up close and personal without a care in the world.

There also posts of the couple out sight-seeing in different places. And, you will see many pictures of the couple’s wedding with the bride and the groom sharing intimate kisses.

2 years ago we had our first date and my life was changed forever. I couldn't and wouldn't want to go through life with anyone else. This has been the absolute best 2 years of my life and I can't wait to see what life has in store for us. I love you so much Havea ?

Prayers for a Speedy Recovery

Currently, both Harvey Langi and Cassidy Langi are in hospital under medical care. Family, friends, and fans are all praying for the quick recovery of the couple and their safe return home.

In their moment of crisis, our prayers are also with Cassidy Langi and her husband.