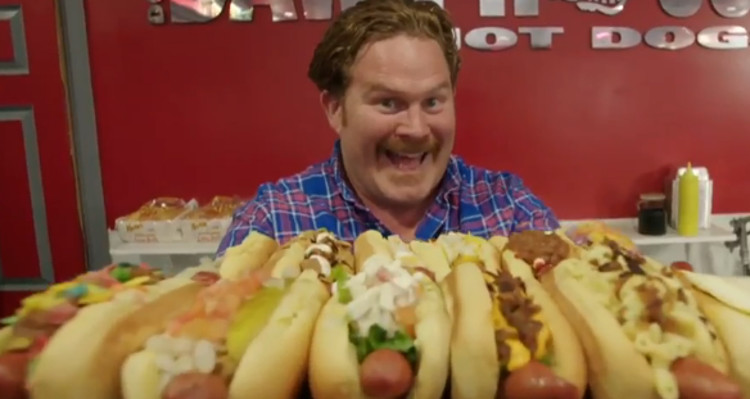 Casey Webb is the man of the moment as Man v. Food enters its second season. The foodie will head over to new cities with crazy food challenges and fans can’t wait to see what tasty treats and feats he’s got in store! Until the new season airs, learn more about the host with our Casey Webb wiki.

After its successful run, Adam Richman’s Man v. Food came to an end in 2012, following the host’s decision to quit competitive eating. Last year, however, the Travel Channel brought the show back with a brand new face! Meet the man himself and get to know everything about him in our own Casey Webb wiki. The new host is pumped for his return to the show, and we are excited to see what else he will bring to the table!

At the age of 15, Webb was living in Jersey Shore, and began working in restaurants in the area. From the kitchen to the bar, and even as a manager, his love of food only grew as his career progressed.

On Man v. Food, Webb looks for the best and wildest food joints to not only try something new, but find twists on classic dishes. The Travel Channel series is his ticket to tour the country and find the best food it has to offer. A self-described “food enthusiast,” there is no challenge he is not willing to take on!

Join me in Vermont tonight @ 9:30 and in Seattle @ 9:00 #Repost @handyslunch✨ 9:30 tonight tune in to the @travelchannel for #ManVsFood to see our #ChuckNorris breakfast sandwich will @iamhusky4life finish it? Will Chuck take down Casey? You’ll have to watch to find out! #btvbreakfast #btvsouthend #3generations #onlyathandys #btvbestbreakfastsandwich #btvbiggestbreakfastsandwich

Born and raised in Little Silver, NJ, Webb moved to New York to become an actor. He saw success with appearances in Boardwalk Empire and Inside Amy Schumer.

He also did voice overs for commercials and was in many national commercials, as well. He is also part of The Collective and The Actors Theater of New York.

One downside to taking on the challenges of a professional eater is that the large portion sizes typically mean you have to shop for larger pant sizes.

Former host Adam Richman mentioned the struggles of weight gain as a consequence of doing the show saying, “When I watch old episodes, I see my doughy face. But I’m not filled with regret, because I made the adjustments.” He also added that “Man v. Food was the biggest career-defining opportunity. I went from anonymity to someone of note with access to amazing eateries.”

Going into his second season, Webb does not seem to have lost his enthusiasm. Casey Webb’s photos on Instagram are a testimonial to his excitement as he gets ready to host another season of Man v. Food.