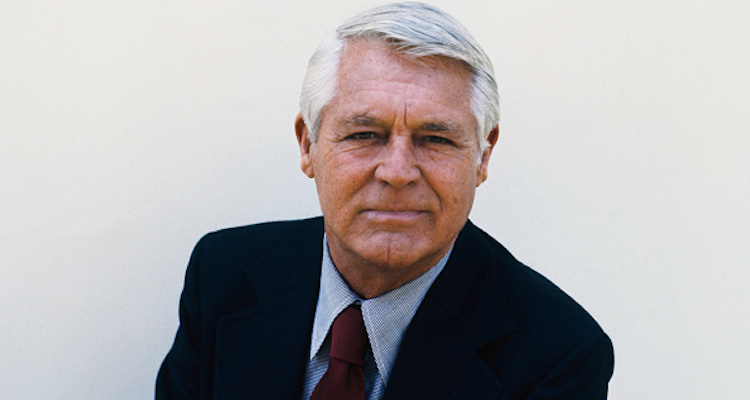 One of Hollywood’s most charming actors is being remembered in the new Becoming Cary Grant documentary, airing tonight on Showtime. Through the biopic film, fans of the deceased actor (and those who have never heard of him) will get the chance to see the life he led, up until his death. If you’re intrigued by this old Hollywood story, then take a stroll down memory lane with our Cary Grant wiki.

Who was Cary Grant?

Before changing his name, Cary Grant was born as Archibald Leach on January 18, 1904 in Bristol, England to Elias, a clothing presser and Elsie, a homemaker. His father left the family for a job in Southampton, where he eventually met another woman and had a child with her. When Grant was 10 years old, his relatives told him his mother ran off to a resort. Grant, who received little support from his father, felt alone and ran away from home at 13. He worked a few odd jobs before he hit the road and joined a team of traveling acrobats, which included a trip to New York. Just over a decade later, he changed his name, adopted a unique accent, and within four years became a huge Hollywood star, after he landed in California and signed with Paramount. Cary Grant’s cause of death was a stroke at age 82, in Davenport, Iowa.

On Friday June 9 at 9:00 p.m. EST, Showtime is airing a documentary about the life of Cary Grant, covering both his struggles and his triumphs. His career spanned 34 years and Cary Grant movies such as Night and Day, To Catch a Thief, and North by Northwest, made him one of the brightest stars in Hollywood. The film was originally screened at the Cannes Film Festival, but has now has made its way to Showtime. The documentary is narrated by actor Jonathan Pryce, who reads Grant’s memoirs as if Grant were the one reading them. In just 85 minutes, Becoming Cary Grant explores the late actor’s relationships, career, and most interestingly, his deepest secrets.

Decades after Grant was told that his mother had abandoned him, he found out that his father had committed her to the Bristol Lunatic Asylum. His parents taught him good manners and fine tailoring (which only helped his charm), but their marriage was chaotic and unhappy. Under the diagnosis of “mania,” Elias had Elsie admitted and she remained there until Grant rescued her. He provided for his mother for the rest of her life. It was later revealed by Dr. Mortimer Hartman’s treatment that Grant’s mother was unintentionally triggering his trust issues, something that the doctor helped the actor understand.

Before women swooned over Ryan Gosling or any of the famous Chrises (Pratt, Hemsworth, Evans, or Pine), there was none other than Cary Grant. He was debonair, dapper, and irresistible to women. He was also labeled “impossible” after failing to actually hold onto a woman, despite being able to get one. Grant had a total of five wives: Actress Virginia Cherrill, heiress Barbara Hutton, actress Dyan Cannon, Betsy Drake, and another Barbara. He only had one child: Jennifer, whose mother was Cannon, born in 1966. Grant was a doting father to her, which appeared to be his greatest joy. He also retired the year she was born.

It was actually his then-wife Drake, who encouraged Grant to use LSD (also known as acid), which put him in a psychedelic mood to deal with his depression. He also became the first celebrity to endorse the drug. He had several therapy sessions in 1958 with Dr. Hartman, in which Grant saw “horrifying and happy sights.”

Due to his failed relationships, some have probably asked: Was Cary Grant gay? The movie doesn’t mention the possibility of bisexuality, but film historian and critic David Thompson, provides some insight “into the ambiguous sexual appeal of Grant’s on screen persona,” according to People.