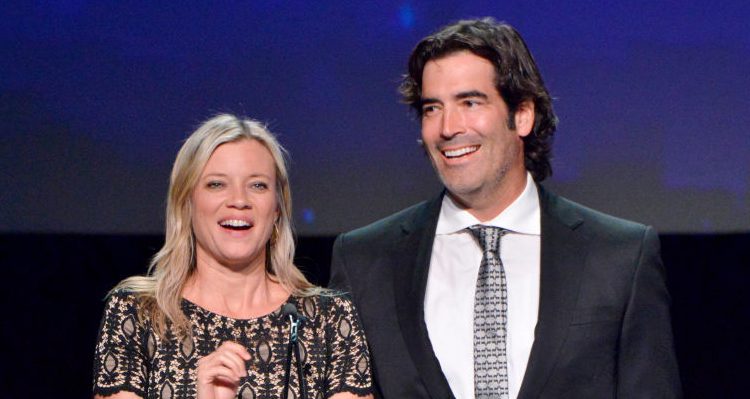 HGTV star Carter Oosterhouse has been accused sexual misconduct by a former employee of a show he worked on. Oosterhouse also happens to be actress Amy Smart’s husband, and his life has taken a complicated turn very quickly. In this Carter Oosterhouse wiki, we’ll look at the HGTV star’s career, the relationship between Amy Smart and Carter Oosterhouse, and the allegations that have been now been aimed at him.

Carter Nicholas Oosterhouse was born on September 19, 1976, in Traverse City, Michigan, and was the youngest of four children. He began learning the skills of what would eventually become his career in carpentry at the age of 12, when he began working for a neighbor as an apprentice.

Oosterhouse went to Central Michigan University on a rugby scholarship, where he earned a Bachelor of Arts in nutrition and communication. After university, he headed west to make a name for himself.

His Television and Personal Life

Carter Oosterhouse is HGTV’s poster boy, but you may be surprised to learn that he originally went the west coast to try for a career as an actor and model. He ended up doing odd jobs here and there, like working on Project Greenlight as a production assistant and tape coordinator. Since his acting career wasn’t working out, Ooosterhouse fell back on his skills as a carpenter.

Ultimately, it all worked out after Oosterhouse auditioned for a TLC show. He ended up combining his skills in carpentry with his knowledge of how to behave on camera when he joined the cast of TLC’s Trading Spaces during season 4.

From there, he made a solid career on television with shows on TLC. Most recently, he starred and produced for HGTV.

The home improvement television career has been lucrative for him, as Carter Oosterhouse’s net worth is estimated at $2.0 million.

Along the way, Oosterhouse met actress Amy Smart. Smart, who is best known for her roles in Varsity Blues, Just Friends, Road Trip, and The Butterfly Effect.

They got married on September 10, 2011, in Oosterhouse’s hometown of Traverse City. Amy Smart and Carter Oosterhouse’s wedding was incredibly eco-friendly and created only half a bag of garbage for over 200 people!

Found the best house in the neighborhood..they have a pool.. #heatwave

On December 26, 2016, the couple welcomed a daughter, Flora Oosterhouse, via a surrogate.

The recent Carter Oosterhouse sexual allegations stem from around 2008 when Kailey Kaminsky, who worked as his make-up artist, alleged that he proposed she have oral sex with him.

According to Kaminsky, the sexually insinuated requests continued until Oosterhouse said that her job may be in question.

Kaminsky told The Hollywood Reporter that one day while they were running errands, “He pulled off the road and said, ‘Do you enjoy your job?’ I said I did and in fact would like to work more, handling more of his personal appearances outside of the show. He said, ‘Well, I can help you with that. But you need to do something for me.’”

It was at this point that Kaminsky gave in to the alleged demands due to fear for her job. She told The Hollywood Reporter that there was no reciprocated physical intimacy and that “when he would assault me, he insisted on finishing on my face — every time — knowing that I had to go back out and work. I asked him about that. He said, ‘It’s just what I wanted to do.’”

Kaminsky said that this happened another 10 to 15 times. She claims that due to the trauma, she was unable to work since. She claims she developed an ulcer in her stomach and was hospitalized for a week, not to mention the adverse psychological effects she’s apparently developed due to the ordeal.

Carter Oosterhouse has denied some of the claims made by Kailey Kaminsky and affirms that it was a consensual relationship between both parties. He apologized to her if she felt that it was not, but also stands by his claim that he did nothing wrong. Oosterhouse told THR, “I did say I thought it was mutual — because it was. I didn’t apologize because I never did anything wrong. That’s the God’s honest truth. I felt bad that she was, in that moment, not-super-positive.”