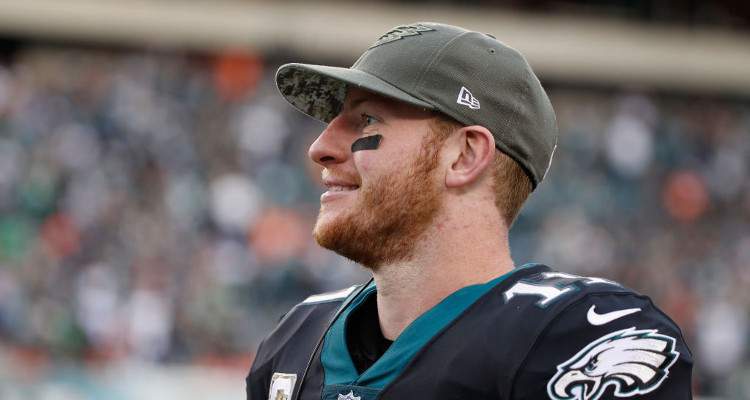 Carson Wentz is officially off the market! The Philadelphia Eagles quarterback is engaged to Maddie Oberg. They went public with their relationship recently. Until then, fans were still clueless about Carson Wentz and Melissa Uhrich’s breakup.

It’s both a celebration and surprise for the quarterback’s fans. You see, very few realized that they were dating. Even fewer noticed he broke up with his previous girlfriend, Melissa Uhrich.

Here’s what you need to know about Carson Wentz’s ex-girlfriend with details from Melissa Uhrich’s wiki.

Who Is Melissa Uhrich?

Melissa Uhrich was born and raised in Bismarck, North Dakota, where Carson Wentz grew up. Her parents are Melvin and Kerry Uhrich.

Melissa Uhrich and Carson Wentz were high school sweethearts. They both went to Century High School in Bismarck.

While Wentz went to North Dakota State University, Uhrich went to Concordia College. In college, she waxed cars as a car detailer to earn extra cash.

Uhrich graduated from Concordia College with a bachelor’s degree and now works as a registered nurse in North Dakota. She was reportedly working at CHI St. Alexius Health in Bismarck and was a patient care technician at Essentia Health.

Melissa Uhrich’s age is not known, but she’s around the same age as 25-year-old Wentz.

The registered nurse has been an athlete all her life, right from the fourth grade. She got her passion for running from her father and competed in several races with him. And, she played basketball and track and field.

Uhrich had a promising cross-country career in high school. She was selected to the Western Dakota Association All-Conference team and the Midwest All-Region team in North Dakota in 2008.

However, in 2011, Uhrich suffered a torn ACL and damaged meniscus while playing basketball. She was back to running after surgery and rehab but noticed that her stamina was not what it used to be.

When stamina issues continued, Uhrich sought a doctor. She was diagnosed with iron-deficiency anemia.

Iron pills and medication had her running once again. But another injury derailed her athletic career.

The retired athlete is an All-Region and All-MIAC honors receiver. She continues to run for her health, although not competitively.

Uhrich’s fondness for sports apparently spills over to her choice of movies. Her favorite movie is Coach Carter, a sports flick starring Samuel L. Jackson and Channing Tatum.

Carson Wentz once mentioned in an interview with ESPN that the pair decided not to live together until they wed each other. This was important not only to them, but also to their respective families.

However, Wentz and Uhrich broke up on the down-low. Many didn’t notice until the footballer deleted all of Uhrich’s pictures from his Instagram.

Uhrich has limited activity on social media. A devout Christian, many of her posts relate to her faith. Although she tended not to share her now ex’s spotlight, she often appeared on his Instagram.

It’s not known when the athletic couple broke up. The last post on Melissa Uhrich’s Instagram featuring Wentz is in February 2017.

Wentz went on to date Maddie Oberg after his relationship with Uhrich ended. They kept their relationship quiet for months.

Oberg made her first appearance on the quarterback’s Instagram in a Thanksgiving post with his teammates and family. At that point, she was mistaken for Uhrich by many media outlets. And it took hawk-eyed Internet denizens to point out that it wasn’t Uhrich.

Maddie Oberg and Carson Wentz went public with their romance in December 2017 when he shared an update on his injury. And now, Wentz is engaged to Maddie Oberg.

Melissa Uhrich, on the other hand, has a sunny smile hanging with her friends.