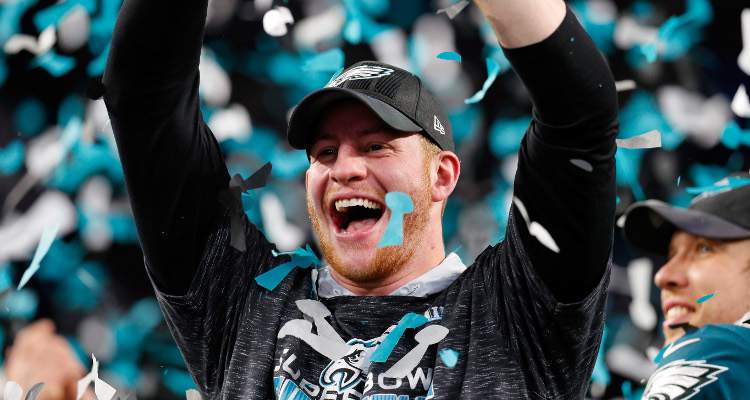 2018 is a great year for Carson Wentz. He topped winning his first Super Bowl championship ring in February by proposing to his longtime girlfriend, Madison Oberg. And then they married on the DL this July. Get the lowdown on Carson Wentz’s fiancée, Maddie Oberg, right here!

How does Carson Wentz amp up the celebratory mood after winning the first Super Bowl in the Philadelphia Eagles history? He drops down on one knee to propose to his beautiful girlfriend!

Now Maddie Oberg has an engagement ring and a wedding ring to match her quarterback hubby’s Super Bowl ring. Find out everything about this Eagles WAG with details from Maddie Oberg’s wiki.

Who Is Maddie Oberg?

Madison “Maddie” Oberg, age 21, hails from Lexington, Kentucky. She is the youngest of three children born to Brian Oberg and Lisa Broughton. Her eldest sister, Lauren Oberg, is 27, and her other sister, Alexis Oberg, is 23.

Oberg was a student at Ozark Christian University. She later studied elementary education at the Missouri Southern State University.

They Both Went on a Haiti Mission

Maddie Oberg has worked at a few places, and some of them overlap with her footballer beau’s work. She worked in Joplin, Missouri at Ozark Admission.

Oberg later had an internship stint with Mission of Hope: Haiti, a non-profit organization based in Cedar Park, Texas. She was a member of the Mobilization Hospitality Team that traveled to Haiti.

Some fans believe that Carson Wentz and Maddie Oberg worked together in Haiti because they were there at the same time.

New Christmas tradition at the Wentz house! Gingerbread cookie decorating battle… because everything is a competition… even on Christmas ? safe to say Maddie and I took the cake on this one ?? Merry Christmas everybody!

The quarterback launched the Carson Wentz AO1 Foundation in June 2017. He went on a mission trip to Haiti with his teammate, Jordan Matthews, and a few members of his church last year.

The Carson Wentz AO1 Foundation donated funds to Mission of Hope’s initiative to build a sports complex in Haiti.

Wentz said in a statement, “I believe in Mission of Hope’s initiative completely, and I feel that this sports complex will be an incredible way for the youth of Haiti to have more opportunities to enjoy sporting competition, to further their education, to have access to healthy meals, and to enjoy being around a Christian community to help further their faith.”

A Fairy Tale Engagement and a Wedding

Carson Wentz was previously dating Melissa Uhrich. They were together since high school in North Dakota.

Uhrich featured heavily on Wentz’s Instagram. But they broke up quietly, and fans didn’t notice until the quarterback deleted her pictures from his Instagram.

It’s not known when Wentz and Oberg began dating. She has no apparent presence on social media and didn’t appear on her boyfriend-turned-fiancé’s Instagram until November 2017.

Oberg was first seen in Wentz’s Thanksgiving post with his teammates and family. At that point, many reports mistakenly referred to her as Uhrich.

The couple went public with their romance for the first time in December 2017.

Surgery ✔️ the comeback officially begins now! The Lord truly blessed me with this beautiful young lady to walk by my side and support me through all of this! #comeback #grateful

The Eagles lost Wentz to an injury in December. He underwent surgery to repair his torn ACL and gave an update from the hospital. And Oberg made her official debut as an Eagles WAG in the same post.

After winning his first Super Bowl ring, Wentz proposed to Oberg in what is perhaps the best location in her hometown—Castle Post, also known as Martin Castle. It is a medieval-style castle situated near Lexington, Kentucky.

Carson Wentz shared his engagement on social media with pictures from his beautiful proposal. What a way to make a woman feel like a princess!

She said YES! And now Maddie and I both got us a ring ?? can’t wait to marry my best friend! God is doing some amazing things and I can’t thank him enough! pic.twitter.com/OPr0kilabh

After that sweet engagement, Wentz and Oberg secretly tied the knot over the past weekend in Bucks County. He shared select shots from their special day on Twitter and we’re awestruck!

The wedding reportedly took place at The Lake House Inn where a passing boater even managed to sneak a few shots of the ceremony.

Such a blessing to finally get to marry my best friend! It was an incredible day and God has his fingerprints all over our story! I’m a lucky man with one amazing wife ?? #WentzUponATime pic.twitter.com/6N99DgQ3NV