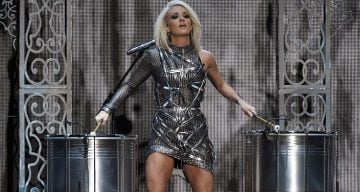 Carrie Underwood net worth of more than $30.0 million puts a crown on her head for being the richest American Idol winner of all time.

While some sources speculate it to be more than $70.0 million, a general take on Carrie Underwood’s estimated net worth is somewhere between $30.0 million to $50.0 million, as of 2016.

That makes Carrie Underwood one of the most successful artist of country music as she’s closing in to be even more successful than country singer like Shania Twain, Dolly Parton, and Taylor Swift. Carrie Underwood is the reigning queen of country music and is considered a “diva” of the music genre. Underwood’s musical success makes her one of the best-selling solo artist of all time. On top of that, she’s the best-selling singer in the country music history and her albums have been top-sellers for over a decade.

Carrie Underwood’s singles “Jesus, Take the Wheel,” “Cowboy Casanova,” and “Before He Cheats” made her an obsession of country music lovers. She’s the wealthiest American Idol winner and earns way more than any other winners. Billboard ranked her the top female artist in their Best Country Artists list of the 2000s.

How Rich is Carrie Underwood?

The 33-year-old singing beauty was born on March 10, 1983 in Muskogee, Oklahoma. Carrie grew up on her family’s farms, making her roots as a cowboy girl. The humble upbringing made Underwood more dedicated, especially in her passion for singing. When she was just 14, Carrie auditioned for Capitol Records for a record deal, but it fell through. After completing high school, Carrie auditioned for American Idol in the summer of 2004.

After getting selected and eventually winning the fourth season of American Idol, nothing remained the same for Carrie Underwood. The show’s global exposure made the first penny into start of the Carrie Underwood net worth. The then-22-year-old became a young icon for singers, making way for her debut album release.

In 2005, Carrie Underwood’s Some Hearts album became a debut breakthrough and became the number one country album of the decade. The success followed for her albums Carnival Ride (2007), Play On (2009), Blown Away (2012), and Storyteller (2015). So far, Carrie Underwood has sold more than 65.0 million records worldwide, and has even had sold-out tours and concerts to her credit.

Carrie Underwood’s legacy starts with her being a seven-time Grammy winner and a major influence in country music. Rolling Stone recognizes Carrie Underwood as the female vocalist of the generation. Time magazine named her in their list of the “100 Most Influential People In the World” as she’s the only country music artist of 2000s with a number one single on the Billboard Hot 100. Carrie has also broken her own Guinness record for most number one hits by 10 times.

Carrie Underwood gets multimillion-dollar deals from top brands that would pay anything to be endorsed by the singer. The blonde cowgirl is essentially a beauty with amazing vocals and her controversy-free public image makes Carrie Underwood a bankable brand. Her endorsement deals include Vitamin Water, Sketchers, Nintendo, Olay, Nicole by OPI, and Hershey’s. She’s also begun designing her own clothing line through Tommy Hilfiger called CALIA by Carrie.

In 2010, Carrie and her hockey player-husband Mike Fisher bought a mansion in Ottawa, Canada. Her palace sits on over eleven acres in the luxurious Spruce Ridge neighborhood. Carrie and her husband put this $2 million estate on sale and moved to a modest cottage in Nashville, Tennessee . Now, the country songstress has bought about 400 acres of land in Nashville for $3.0 million. According to Variety, it’s reported that a huge Underwood mansion is underway and will be completed this year. Carrie will move in with her husband and begin her wealthy and prosperous marital bliss.