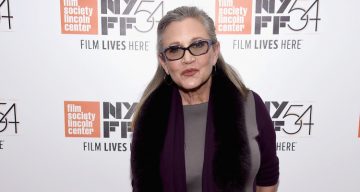 Star Wars actress, Carrie Fisher died at the age of 60 on Tuesday. Find out Carrie Fisher’s cause of death here.

Actress and author, Carrie Fisher passed away Tuesday (December 27) morning. Simon Halls, a spokesperson for the family, released a statement announcing her death saying, “It is with a very deep sadness that Billie Lourd confirms that her beloved mother Carrie Fisher passed away at 8:55 this morning. She was loved by the world and she will be missed profoundly. Our entire family thanks you for your thoughts and prayers.” How did Carrie Fisher die? We have more information here.

What Time Did Carrie Fisher Die?

On Friday (December 23) afternoon, Fisher suffered a heart attack while traveling to Los Angeles from London. She was admitted to the UCLA Medical Center.Approximately 15 minutes before the flight landed in Los Angeles, Fisher went into cardiac arrest. A passenger on board, who was an EMT, performed CPR before the plane landed and emergency crews rushed Fisher to the hospital. Carrie Fisher’s family later announced that Fisher was in critical condition. At 8:55 a.m. on Tuesday (December 27), Fisher passed away. As of June 19, based on documents from the Los Angeles County coroner’s office, toxicology reports revealed the late actress had cocaine, methadone, ethanol and opiates in her system when she died.

After being treated at UCLA, her mother, actress Debbie Reynolds, said that Fisher was in a stable condition. Reynolds posted a heartwarming message on Twitter thanking her fans saying, “Carrie is in stable condition. If there is a change, we will share it. For all her fans and friends, I thank you for your prayers and good wishes.”

Fisher was in London to promote her new book, The Princess Diarist, a collection of personal and revealing stories of what went on behind the scenes of the first Star Wars film.

In November, during her interview with RollingStone, Fisher briefly spoke about death. After being asked if she feared death, Fisher said, “No. I fear dying. Anything with pain associated with it, I don’t like. I’ve been there for a couple of people when they were dying; it didn’t look like fun. But if I was gonna do it, I’d want someone like me around. And I will be there!”

Many celebrities were shocked to hear the news about Carrie Fisher’s death, and expressed their condolences by posting on various social media pages. Hollywood certainly lost one of its brightest stars.

It is definitely a hard time for Carrie Fisher’s family, may her talent, humor, and liveliness never be forgotten.