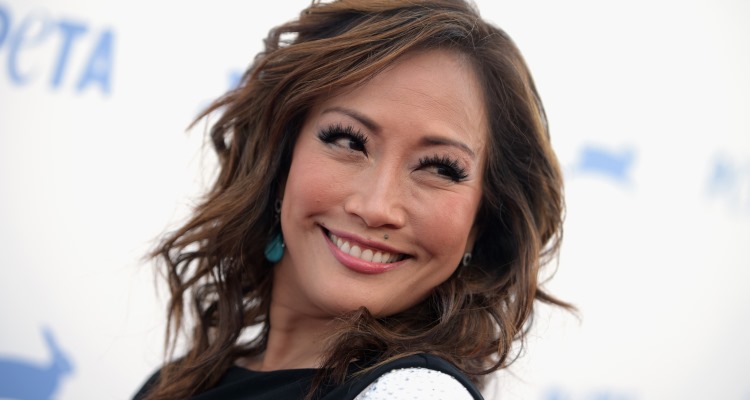 Dancing with the Stars judge, Carrie Ann Inaba shared some exciting news with People on Wednesday. The dancer and game show host is officially engaged! Who is Carrie Ann Inaba engaged to? After a “perfect” proposal, Carrie Ann Inaba and Robb Derringer can start preparing for their special wedding day!

On Saturday, December 10, Derringer proposed to Inaba at a secluded beach cove in California, the site of their first date. Inaba told People, “Saturdays are special to us, because our first date was on a Saturday and we have celebrated with a toast, a visit to a beach, special date, a motorcycle adventure, or a road trip on every Saturday since.” She continued to describe the proposal saying, “we returned to the place of our first date and got engaged at the same place we shared our spontaneous and magical first date.” The General Hospital actor proposed with a beautiful customized ring by designer, Jean Dousset. To see Carrie Ann Inaba’s ring, check out the heartwarming picture below! Keep reading for more facts about the new bride-to-be, including information on Carrie Ann Inaba’s net worth.

Inaba gushed to People about the magical proposal and her excitement about the new journey saying, “We shared our desire to commit to one another for life by beginning that journey in a very intimate and private way, just the two of us, alone on the beach with a bonfire, a bottle of Aubert Chardonnay and the majestic Pacific Ocean that has always been an integral force in both our lives,” she says. Her romantic fiancé wrote down his feelings for her in a letter expressing how much she meant to him, how much she had changed him, how much she had taught him in their time together thus far, and what his hopes and dreams and intentions were for their future together. That was before he got down on one knee under “the most serene and tranquil night sky I’ve ever seen” (according to him) and asked her to be his wife, “which she thankfully replied yes,” he added.

The couple went on to explain how wonderful the setting was—they felt as if they were the “only two people on earth” and the experience was “poetic destiny” for them. Derringer and Carrie Ann Inaba’s age and Derringer’s age are the same, as they are both 48, and only met earlier this year. Inaba told People, “I think that because we were both 48 when we met and had both experienced so much life before meeting, our love unfolded in a different way than it does when you are 28, and for that we are grateful.” It didn’t take long for this couple to meet, fall in love and end up happily ever after! (Hopefully!)

“We’ve had to let go of things that worked for us as individuals to find better ways that worked for us as a couple,” Inaba added. “He’s my person and I am his.” The couple plans to tie the knot on—you guessed it—a Saturday! So, if you’re wondering who is Carrie Ann Inaba’s husband, the answer will expectedly be Derringer!

Inaba was born in Honolulu, Hawaii on January 5, 1988 and is of Boricua, Pinay, Irish, Chinese and Japanese descent. From 1986 to 1988, she lived in Tokyo, Japan and was a popular singer. She returned to America and appeared as one of the “Fly Girls” from the In Living Color TV show from 1990 to 1992. The talented dancer also appeared during Monna’s 1993 Girlie Show World Tour. Inaba has also appeared in several movies. In 2002, she appeared as Fook Yu in Austin Powers in Goldmember, a twin in Austin Powers: The Spy Who Shagged Me (1999), Boys and Girls, and more! She is mostly known for her role as a judge on Dancing with the Stars from 2005 to present. Carrie Ann Inaba’s net worth is $8.0 million. The profit from her endorsements have not been announced, but she appeared with Mike Myers in a high-profile campaign for the cell phone brand, Motorola.

She Was Previously Engaged

In 2009, Carrie Ann Inaba and Jesse Sloan were engaged. On March 31, 2011, Sloan and Inaba were on the Live with Regis and Kelly show. Sloan had the whole production team up to help him propose to Inaba. The lights dimmed, he appeared on stage, got down on one knee as violins played, and asked for her hand in marriage! The couple met on eHarmony and she told US Weekly in 2011 that they would marry in the summer of that year. However, in September 2012, the couple amicably ended their engagement.

We wish Carrie Ann Inaba and her new fiance nothing but the best in the coming year, and congratulations on their adorable engagement!