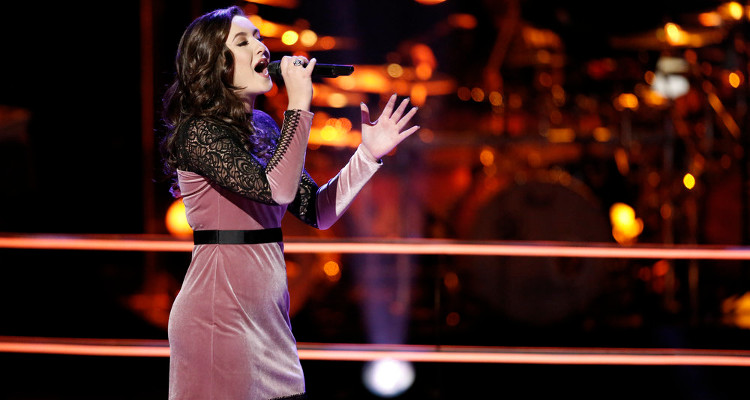 Caroline Sky made it to the Knockout Rounds of The Voice 2017, purely on merit. Though she is only 16 years old, she has a maturity and singing ability far beyond her years. Her voice has impressed all the coaches and with Blake Shelton guiding her, she could go far in the competition.

She has a luminous voice, she is a singer-songwriter, and she plays the acoustic guitar like a veteran, all at just 16 years of age. San Francisco’s Caroline Sky sang the Carole King classic, “Will You Love Me Tomorrow” for her Blind Audition on The Voice, and made both Gwen Stefani and Blake Shelton turn around. Sky chose to be onTeam Gwen. After her performances on The Voice 2017, people have really warmed up to Sky and want to know more about her. We have some details from Caroline Sky’s wiki, right here.

Saved by the Steal

helllooo east coast music lovers! I'll be playing July 11 at the MARTHAS VINEYARD SOUND FESTIVAL at 1:30! i'm also super pumped about a concert with the one and only David Crohan, at the Old Whaling Church in Edgartown, Martha's Vineyard, SUNDAY, JULY 12 at 6:30. AND at Alex's Place on July 25 at 8. I really hope you can make it to any of these shows!

Caroline Sky’s Battle Round opponent was the formidable Stephanie Rice. Both Sky and Rice sang the classic, “The First Cut is the Deepest” by Cat Stevens and performed by P.P. Arnold in May 1967. Both singers performed with passion and feeling, hit the high notes, and enthralled the coaches and the audience by their talent. In the end, Stefani picked Rice as the winner of this Battle Round. But thankfully, Sky’s run in the competition was not over. Much to everybody’s delight, coach Shelton used his steal to bag Sky for himself. So, Caroline Sky gets to stay in the competition and fight in the Knockout Rounds.

Also Read: Felicia Temple Wiki: Everything You Need to Know about “The Voice” Contestant

A Quality Education in Music

Sky started singing at an early age, and was just nine years old when she was chosen to sing in the prestigious San Francisco Girls Chorus. She got world class training and performed regularly at the city’s legendary Davies Symphony Hall and even toured extensively with them. After three years, Sky found her passion in acoustic folk, blues, and pop, so she learned to play the guitar and piano and began writing her own songs. She began performing in some of the most well-known music venues and festivals in the Bay Area, and got to sing with well-established musicians like Joan Baez, Carly Simon, Ben Taylor, and members of the Carlos Santana Band.

Maturity Beyond Her Years

Caroline Sky has always believed that music has the power to bridge differences and bring people together. She regularly sings at charity events and has supported organizations like Camp Jabberwocky, Doctors Without Borders, Bread and Roses, Guide Dogs for the Blind, and Island Elderly Housing. In 2015, she released her self-titled debut EP to rave reviews. People praised her self-composed songs as “achingly beautiful” with “stick-in-your-ear hooks” and “mature, worldly lyrics.” Even at her age, she has been compared to singers like Joni Mitchell, Joan Baez, Grace Potter, and Sara Bareilles.

Also Read: TSoul Wiki: Everything You Need to Know about “The Voice” Contestant

The Moment of Reckoning

so honored to be playing at the 2016 @thenammshow in Los Angeles! I'll be at the Mariott Stage on Saturday 1/23 at 3 pm. more news to come!!

Since Sky is so mature about her singing career, it is easy to forget that she is still just a high school student! Her playfulness and sense of fun are evident in Caroline Sky’s Instagram account. Right now, she is focusing on her performance in the Knockout Round, which she needs to win in order to stay in the competition. Sky has everything going for her at the moment. Her future is wide open!