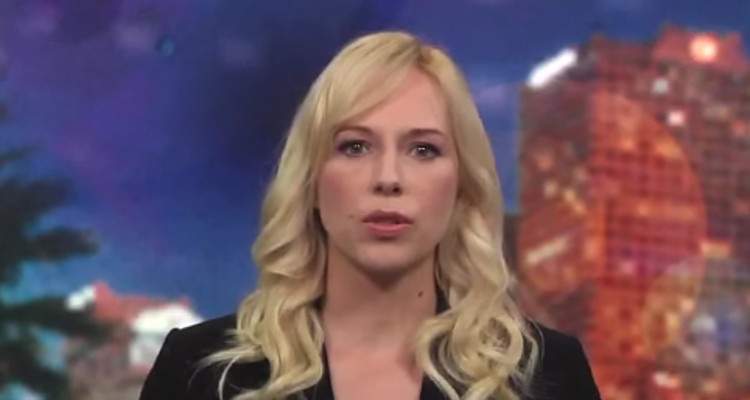 Bill O’Reilly may have been booted off the Fox News Channel, but that doesn’t mean the drama is over. Among the women who accused the longtime anchor of sexual harassment is FNC contributor, Professor Caroline Heldman.

We’ve often seen Professor Caroline Heldman on the Fox News Channel, giving her insight on different political debates. She has made many appearances on FNC’s The O’Reilly Factor or as it’s now renamed, The Factor. Just to get you up to speed, the show’s host, Bill O’Reilly has been dropped by Fox, in light of sexual harassment charges against him. What is Heldman’s part in O’Reilly’s ousting? Here are details on that and much more in our Caroline Heldman wiki.

Who is Caroline Heldman?

Every time Heldman appeared on Fox, the screen below described her as “Caroline Heldman, Ph.D.” That’s a clue to this lady’s many accomplishments. Dr. Caroline Heldman is an Associate Professor of Politics at Occidental College in Los Angeles. The university web site says she specializes in “the presidency, media, gender, and race in the American context.”

She is vegan and holds a fourth degree in Taekwondo. Heldman is also published in some of the top journals in her field and has co-authored, Rethinking Madame President: Are We Ready for a Woman in the White House? In 2016, she authored the journal, The Sexy Lie: The War on Women’s Bodies and the Way to Fight Back.

Her blog says, “She lives in Los Angeles and New Orleans with her partner, E, and their four kitties —  Shredder, Puffin, Zora, and Bashful.”

Also Read: Ted Nugent Wiki: Facts to Know about the Controversial Musician After His Visit to The White House

Heldman briefly worked in the private sector as the general manager for Bio-Energy Systems, a research manager for Consumer Health Sciences, a political reviewer for the Associated Press and as a reporter for KPFK Los Angeles.

She previously taught at Whittier College, Fairfield University, and her alma mater, Rutgers University. As a democratic strategist, she made numerous television appearances on MSNBC, FOX News, Fox Business News, CNBC, and Al Jazeera America. She has also worked in the political field as a congressional staffer, campaign manager, campaign consultant, and political activist. With so many feathers in her hat, we wonder what her net worth might be!

Caroline Heldman is a woman of action. She is one of the founders of Faculty Against Rape, a voluntary organization of faculty members from all over U.S. who strive to end sexual violence on campus.

She was also active in the Hurricane Katrina relief efforts, spending time traveling between New Orleans and LA to help rebuild the homes destroyed by the hurricane, and continues her relief efforts to this day. Heldman leads Common Ground, a New Orleans-based grassroots relief organization. She also co-founded a women’s shelter in New Orleans and Critical Response, a group that provides volunteers to engage in high-risk rescue efforts during crises and disasters.

Her Father was a Musician

Not much is known about Heldman’s early life, her parents, or her age. When her father passed away, she dedicated her blog post to him. Jerome “Jerry” Heldman passed away in 2013 of pneumonia when we was about 75 years old. He was a high school dropout, who joined the Air Force and later the Seattle Police.

Jerry Heldman was a musician and his daughter called him a “Jazz Wizard.” She wrote, “I would only later come to understand that my dad had played with some of the biggest names in jazz —bassists David Friesen and Gary Peacock, guitarists Ralph Towner and Larry Coryell, horn players Nat Adderley and Jay Thomas, wind players Joe Brazil, Carlos Ward, and Cannonball Adderley, and pianists McCoy Tyner and Chick Corea.”

Her mother, Julia Selvidge was a student at Washington University and a theater artist. The couple married in 1965 and had six children: Clare, Christian, Sarah, Caroline, Kathleen, and Joy.

When it surfaced that Bill O’Reilly had sexually harassed a number of women, there was outcry and many wanted him fired. TV personality, Attorney Lisa Bloom represented the women who came forth with sexual harassment claims against the Fox anchor. The three women who stepped forward were radio host Wendy Walsh, an anonymous former Fox News employee, and Caroline Heldman, who was last to file a complaint to the Fox News hotline. The accusations included verbal abuse, unwanted advances, and lewd comments.

These accusations caused advertisers to drop The O’Reilly Factor, and the situation was dire for the network. While O’Reilly continues to deny the claims, Fox head honcho Rupert Murdoch, along with his sons, finally agreed to let the longtime anchor go.

Heldman’s allegations haven’t been revealed and many are curious if she’s the last straw that broke the camel named O’Reilly’s back. It could also have to do with another woman, who approached Lisa Bloom with new allegations against the former anchor.

Here is my victory statement. pic.twitter.com/TQLC6Oz9gk