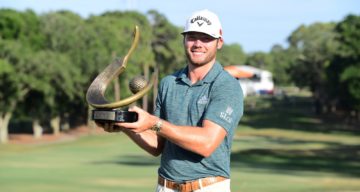 Sam Burns won the first PGA Tour event of his career with a spectacular run in the Valspar Championship. This not only puts the young pro golfer in the spotlight, but also brings attention to the people who supported his career. His growing legions of fans specifically ask about who Sam Burns’ wife is. Caroline Burns (nee Campbell) has been a main feature in his career since his amateur days. She is, however, relatively private about her life, which makes Burns’ fans more curious. So, we reveal all there is to know about Sam Burns’ wife in Caroline Burns’ wiki.

Born Caroline Campbell on April 8, 1996, she is a native of Shreveport, Louisiana. She is one of three children born to Chris Campbell and Catherine Cordell.

Caroline and her siblings attended C.E. Byrd High School, of which her grandfather, Bo Campbell, is an alum. Bo Campbell, a successful figure in the banking industry, was a football player at LSU and a peer of Pat Studstill, the retired NFL pro.

His grandchildren share his athletic prowess. While Caroline was on the track and field team at C.E. Byrd, her brother, Green Campbell, played baseball in high school and at Yale. Their brother, Collier Campbell, also played football.

Sam Burns and Caroline Campbell have known each other since they were little kids attending church together. Burns once said she was his first Valentine when they were five.

They then grew apart, only to reconnect in high school and later date in college. They’ve been together since his amateur career at least, and began featuring on each other’s social media accounts in 2015.

They got engaged in April 2019. The same year, Burns and Campbell tied the knot, on December 14, 2019. The wedding was held at Palmetto Bluff in Bluffton, South Carolina.