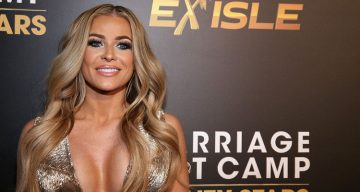 Carmen Electra has had a busy career acting, modeling for Playboy, and dancing. Now, the bombshell is all set to launch her own line of lingerie! We have all the details about what Carmen Electra is up to today and more details about her sexy new line of intimate apparel!

She was on par with Pamela Anderson in the 1990s when half the planet was addicted to the iconic TV show, Baywatch. Carmen Electra, who played Lani McKenzie, had won the hearts of millions of men throughout the world. But after years in the limelight as one of the hottest women in the world, many are wondering where she is now what is she’s been up to. Electra is as sexy as ever, a fact made obvious when she turned up for Coachella, where she was spotted with former Mötley Crüe drummer and ex-boyfriend, Tommy Lee. Both Tommy Lee and Carmen Electra reunited over the weekend and were spotted getting quite comfortable! So, where is Carmen Electra now? We have the details about Carmen Electra in 2017, right here.

Launching Her Own Lingerie Line

Electra partnered with Danish JBS Textile Group to launch her line of lingerie called With Love from Carmen. This European-based collection will have underwear, nylons, homewear, and swimsuits. She is working on the launch of her new lingerie line in the United States, meanwhile marketing the line in other parts of the world.

Also Read: Sahara Ray Instagram: Check Out Her 10 Hottest Pics of All Time

Electra wants her lingerie line to be inclusive, saying, “I think every woman has parts of their bodies that they feel confident about, and then other parts that they don’t feel as comfortable with. You have to know your body and how you want to look. You do that by trying everything on. For me, I love corsets…unless I’m around the house, then I want something really comfortable and soft. But whatever makes you feel best.”

Happy Valentine's Day 2 all the singles and the luvas ❤️❤️❤️❤️

After finding success from Baywatch, Carmen Electra appeared in movies like, Scary Movie, Date Movie, Epic Movie, Meet the Spartans and Disaster Movie. She also modeled for Playboy and worked as a dancer with a burlesque-style dance troop known as The Pussycat Dolls. Electra was married twice in her life. First to NBA star, Dennis Rodman and then to Dave Navarro, the lead guitarist for the rock band, Jane’s Addiction. Both marriages ended in divorce, but she didn’t lose hope. She was then engaged to guitarist and composer, Rob Patterson, who worked with bands like Otep and Korn. The two split in 2012, after being engaged for four years.

Carmen Electra today is still as ambitious and positive as she was in the ’90s. When asked about her personal life, Electra replied, “I’m actually single right now. But I believe in love, and I think the right person will come my way. I think I’m a little pickier now. I just want the right thing. [But] I also decided to focus on work. I’ve been out on some dates, but nothing has really panned out for me. I’m not out there looking. I think that it will happen naturally and I’ll be excited for that day.”

Those who are wondering how Carmen Electra looks now should check out her Instagram account! It is full of sexy and hot photos of her living her fabulous life. Even though Carmen Electra’s age is almost 45, it is clear that time has been very kind to her (we swear, she hasn’t aged a day). Right now she is excited about her new lingerie line and the upcoming Baywatch movie. It’s hard to believe it’s been nearly two decades since we saw Carmen don that sexy red one piece and slow-mo her way down the beach!