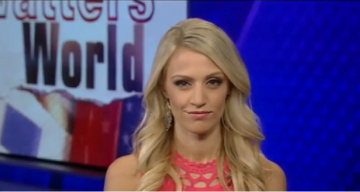 Carley Shimkus on Fox News is best known for reporting on the morning news show, Fox and Friends. She’s also known for her beauty, which if you haven’t noticed, is also what makes her so enjoyable to watch! But she’s not ‘all looks and no brains!’ If you want to learn more about this high-powered new anchor, keep reading our Carley Shimkus wiki!

Carley Shimkus was born on November 7, 1986, as Carley Noelle Shimkus. She attended Quinnipiac University from 2005-2009, where she graduated from with a Bachelor of Arts in Broadcast Journalism. She was also a part of a group of students that were chosen to attend the George Washington University Semester in the Washington Journalism Program in 2008.

Carley Shimkus, age 31, first came into the public eye when she became a reporter for Fox News in 2009. After three years with the news corporation, she became the associate producer at Fox and Friends. In terms of her career, she’s extremely ambitious and also handles many of the productions for Don Imus’ website. Conducting many of the behind-the-scenes for interviews Imus, she also regularly appears on TV and the radio. Shimkus is said to be responsible for producing daily guest segments, managing the rundown of shows, and she produces two hours of the weekend programme “Best of Imus”—a satirical radio show that recaps current events and news, each week. In addition to her duties with Imus, she is also the liaison between the Fox Business Network and WABC Radio.

Since she works for such a political news network, it’s no surprise that Shimkus has been involved in a bit of controversy before. In January 2017, the Wonkette website did a quite critical review of Fox and Friends, discrediting much of what Shimkus has said on the production. Carley has also upset the Star Wars fanbase in the past, which is known to be quite fierce in their defense. She allegedly called them “freaks” on the air, and an online petition for her to publicly apologize was sparked!

As for her personal life, things seem pretty picture-perfect from the outside looking in. She dated businessman Peter Buchignani for two years before getting engaged and then married in 2015.  The pairs engagement was announced on Imus In the Morning, in a pretty comical way! Posted in March 2013, the announcement stated that, “There is jubilance in the Fox Business TV Studios…but no joy over at the WABC Radio facility, Carley Shimkus, our Associate Producer, is, now, officially “taken”, much to the chagrin of ‘Gunz’ Gunzelman.  Although Carley has been dating her fiancée for the better part of two years, Gunz was under the impression he ‘Still had a shot’.   ROB had a better chance with Carley than Gunz did.”

Carley Shimkus’ husband, Peter, has a Bachelor’s degree from Princeton University in Political Science, and currently works in the Business Development department at Amherst Pierpoint Securities—previously, held roles at both Barclays Capital and Deutsche Bank.

As for Carley Shimkus’s parents? They couldn’t be more supportive of their successful daughter! They even made their TV debut on a Fox & Friends segment where they shared Carley’s grandma’s famous apple cake recipe!

If you’re looking for hot pics of Carley Shimkus, then you don’t have to look much further than Carley Shimkus’ Instagram page! She’s obviously gorgeous! She frequently posts pictures showing off her incredible physique, as well as pictures of her at work and with her husband.

Ringing in the new year with a smooch and a smile ?☺️ #savagewolff