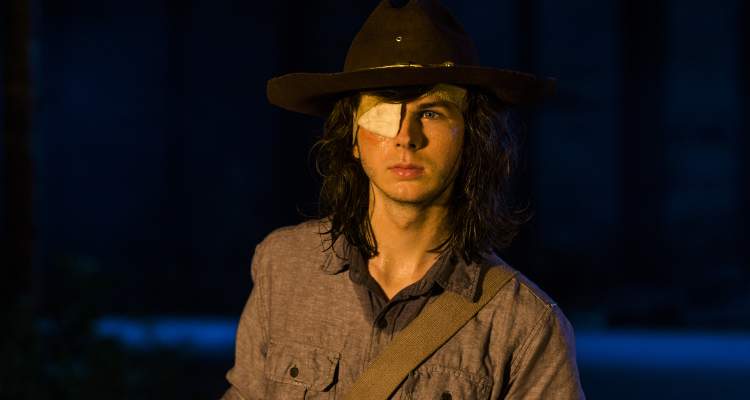 The Walking Dead’s season 8 mid-season finale has continued its tradition of killing off beloved characters. After the latest mid-season episode, die-hard Walking Dead fans are left in shock over Carl Grimes death! Is he really gone? Read on to find out!

After teasing us with a long overdue battle, The Walking Dead mid-season finale delivered a shocking twist at the end of the episode. As usual, the show left fans in disbelief after an unbelievable death of one of the only remaining original characters. The season 8 casualty was fan favorite, Carl Grimes. Did Carl get bit?

Get the lowdown on what happened to Grimes, right here.

How Did Carl Grimes Die on The Walking Dead?

On Sunday’s episode, titled “How It’s Gotta Be,” Daryl’s thoughtless mistake led to Negan raiding Alexandria. Most of the characters escaped death, although some came very close to it. Negan and Rick have a bare-knuckle fight that ends with Rick escaping.

Rick and Michonne arrive in the sewers where the people of Alexandria and Carl have taken refuge, as the Saviors overrun the town. But while they escaped the Saviors for now, Carl shows Rick his nasty bite mark, revealing that he was bitten by a walker! Carl is alive, but infected, which is equal to death in this universe.

Just before the mid-season finale began, Chandler Riggs, who plays Carl, tweeted that “something incredible, exciting, and emotional” is about to go down. Usually, the cast and crew remain tight-lipped about any spoilers. But for Riggs to actually hint at something, we should’ve known it had to do with Carl!

Riggs then posted a follow-up tweet thanking fans and promising to meet them soon. Why? Is he going somewhere?

midseason finale of twd comes on in 15 mins.

a lot of really hard work has gone into this episode from the entire cast and crew to make something incredible, exciting, and emotional.

you don’t wanna miss this one. trust me.

Well, yes, in fact he is. The 18-year-old was recently accepted into Auburn University, which initially lead fans to speculate if his character was going to bite the dust. But Riggs has assured that going to college in real life doesn’t mean he’s out of TWD.

Riggs said, “Theoretically, I could take one or two classes on campus and maybe an online class. My professors would have to be willing to cooperate. It wouldn’t be easy, but I think that could be possible.”

The actor confirmed that he was trying to work out an arrangement to balance school and fighting zombies but he was also unaware his character was going to be cut from the show.

Riggs took a year off from going to college to focus on his acting commitments and he was recently cast in the indie crime thriller, Inherit the Viper. However, it appears that he will indeed be leaving the show, but it’s not because of college.

you’ll hear from me soon.

End of the Road

Carl was bitten episodes earlier when he tried to save a man named Siddiq. So when he was left to defend Alexandria in Rick’s absence, he wasn’t merely riling up Negan at the gates.

Carl was seemingly formulating an escape plan through the sewers when Negan announced his arrival. Carl tells him to “kill me” atop a ladder against the gate that’s keeping the Saviors out.

Negan asked, “You want to die?” Carl replied, “No, I don’t. But I will. It’s gonna happen. And if me dying can stop this, if it can make things different for us, for you, for all those other kids, it’d be worth it. Hey, was this the plan? Was it supposed to be this way? Is this who you wanted to be?”

Carl knows that his days are numbered. There’s no cure for a zombie bite here, either. The show used amputation to stop the zombification, but that won’t work on Carl, who was bitten on the torso.

College-bound Riggs began hinting at his swan song, as this episode has been building up to Carl’s finale. The episode opened with Carl telling Rick not to fight just to overthrow the Saviors, and instead aim for long-term peace.

While Rick was away, Carl wrote him a letter, perhaps because he wasn’t sure if he’d see his dad again.

Carl stalled Negan at the gate, used smoke grenades for diversion, and dodged explosions everywhere while getting the people to safety.

Carl Grimes… just a kid that tried growing up in the apocalypse.. ? #TWD pic.twitter.com/QYqd5Z5749

After the mid-season finale, Riggs confirmed that Carl is at death’s door saying, “Yes, Carl is going to die. There’s no way he can get back from that. His story is definitely coming to an end.”

But reportedly, we still see Carl for at least one more episode when TWD returns for the rest of the season in February 2018.

As showrunner Scott Gimple said, “Carl right now is alive and he has some business to attend to. That is a one-way ticket but I’d like to think that the things that we see in the next episode are so important to his life and the other character’s lives.”

Considering Rick goes to great, violent, lengths for his son, Carl’s death will alter his character and the storyline for the future. And although Riggs had no intention of pulling out of the show, he said it made sense for the story. And now, he’s ready to pursue other projects.

Riggs said, “It was quite the shocker for me, Andy and everyone because I don’t think anyone saw it coming. It’s definitely not a bad thing because it has been awesome being on the show but now I get to go and do a lot of other stuff that I haven’t gotten to do before.”

Chandler Riggs also said that Carl’s story isn’t over yet. We’ll have to see how it all pans out in The Walking Dead mid-season premiere on February 25, 2018, on AMC.

And no, none of this is a dream. #TheWalkingDead