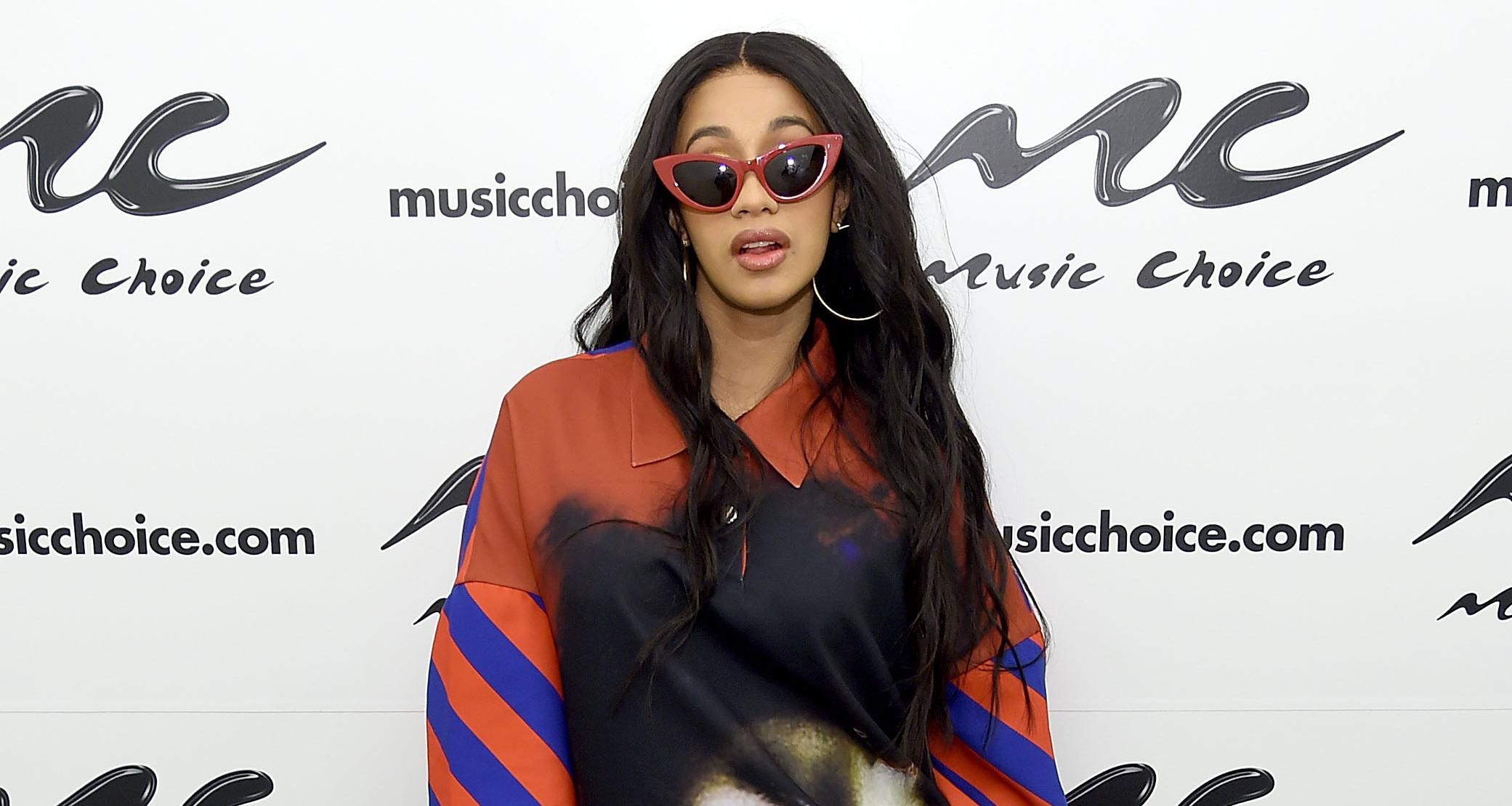 American rapper Cardi B had to become a stripper to make some money and away from an abusive relationship that was wearing her down. She then used her smarts and wits to become a social media star before finding her vocation in rapping. With the release of her debut album, Invasion of Privacy, she has become one of rap’s hottest new stars. Cardi B’s net worth in 2018 is estimated at a modest $4.0 million, but every penny of it was hard earned. With her marriage to fiancé Offset just around the corner and a baby already on its way, Cardi B’s cup of happiness is overflowing.

Cardi B has become a big name on social media and is blowing the hip-hop game out of the water. Although she’s been rolling in the dough on her way to the top, most people would be surprised to know that just a few years back she was practically homeless and penniless.

The rapper’s success is that much sweeter because she rose from poverty and despair to become a self-motivated and financially-independent woman who is looked up to by many women.

Her real name is Belcalis Almanzar, but she is better known by her professional name, Cardi B.

Cardi B’s worth is estimated at a neat $4.0 million. But being just 25 years old and considering her troubled past, it is quite an achievement.

This talented young lady has earned her money by working as a stripper, being an Internet personality, and appearing on TV, along with sales from her singles and albums, and live shows.

Today, Cardi B is famous everywhere as a rapper and well on her way to superstardom.

Cardi B’s Estimated Net Worth Over the Years

She spent most of her childhood at the home of her paternal grandmother in Washington Heights, New York City, before reportedly becoming a gang member of the Bloods at the age of 16.

Cardi B studied at the Renaissance High School For Musical Theater & Technology. She worked at an Amish supermarket in Lower Manhattan as a teenager.

When she was fired from her job, Cardi B’s former manager suggested that she work as a stripper. She took his advice and turned to stripping at the age of 19.

Cardi B has spoken about this part of her life and said that she became a stripper to escape poverty and domestic violence. She was in an abusive relationship at that time.

The rapper said, “It [stripping] saved me from a lot of things. When I started stripping, I went back to school.”

She enrolled in college as well but later dropped out.

Cardi B started working at local strip clubs before working her way up to more lucrative clubs in Manhattan. She attracted customers like club regulars, bartenders, drug dealers, and scam artists, who considered her very “hot.” 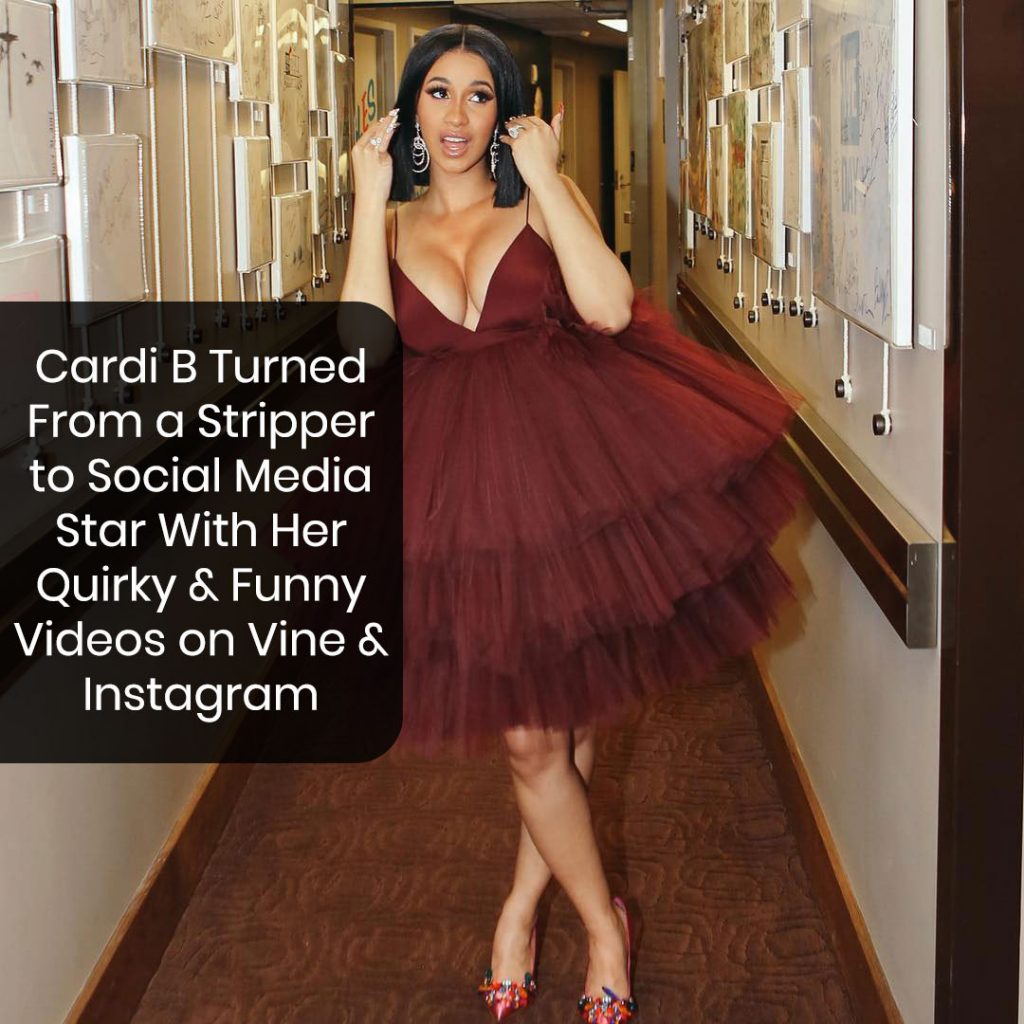 Cardi B then started uploading her videos on social media outlets like Vine and Instagram and quickly developed a fan following. She made quirky and funny videos on relationships, growing pains, and stripping. Many of them went viral and made her a social media star.

She then quit stripping to make money hosting club events as an Instagram influencer. The hip-hop artist currently has over 16.8 million followers on Instagram, and the number is constantly growing.

Her first foray into music occurred when she appeared on reggae fusion singer Shaggy’s remix of his single, “Boom Boom.” She then released two mixtapes titled Gangsta Bitch Music, Vol. 1 and 2, whose success led to her being signed by Atlantic Records for a record deal in February 2017. 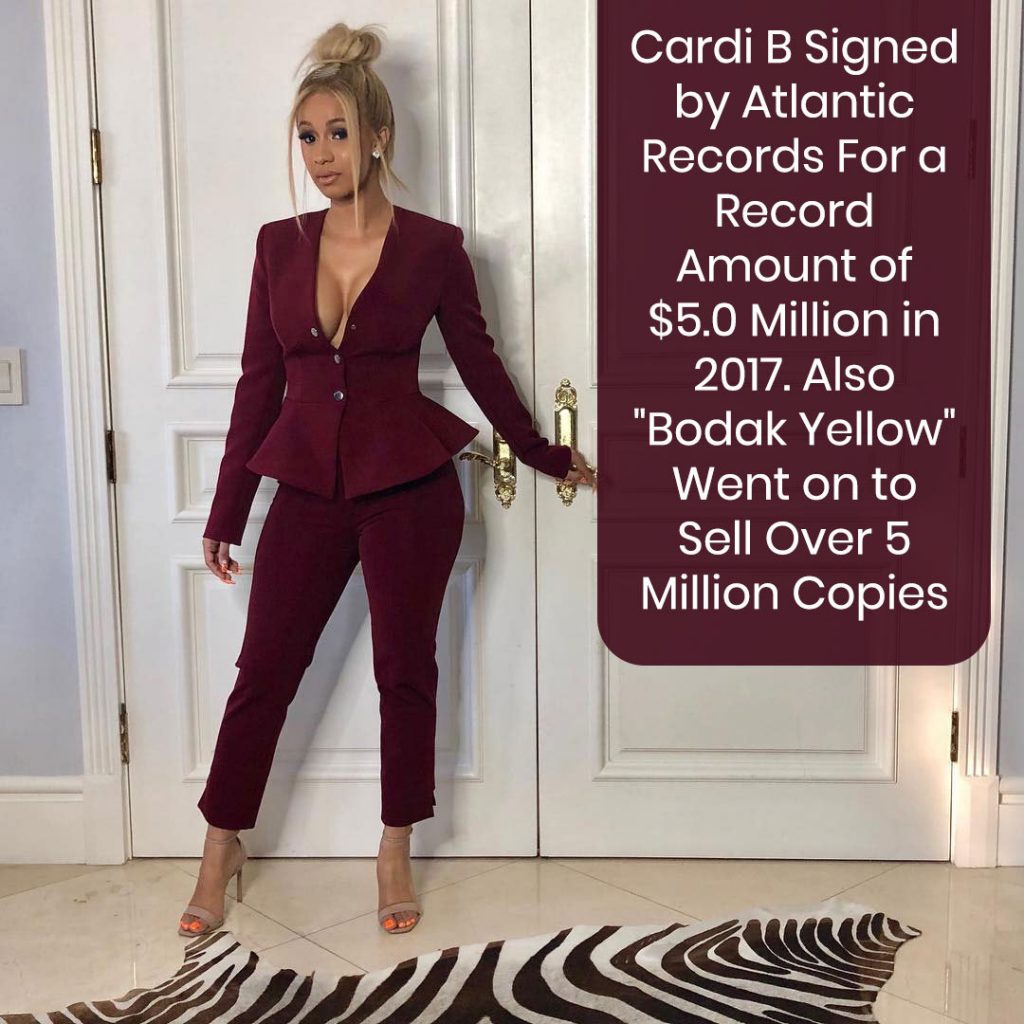 According to reports, Cardi B signed on with Atlantic Records for an amount of $5.0 million.

On June 16, 2017, the rapper released her first commercial single, “Bodak Yellow,” via digital distribution. It went on to grab the number one spot on the Billboard Hot 100 chart for three consecutive weeks. Cardi B had arrived!

“Bodak Yellow” went on to sell over 5 million copies. And, it was called the “rap anthem of the summer” by The New York Times.

On April 6, 2018, Cardi B’s debut studio album, Invasion of Privacy, was released. It landed at the number one spot on the Billboard 200 Album chart, removing all doubts about her commercial viability.

While Cardi B doesn’t get a salary like most people do, she does make money by performing at various venues and music festivals. 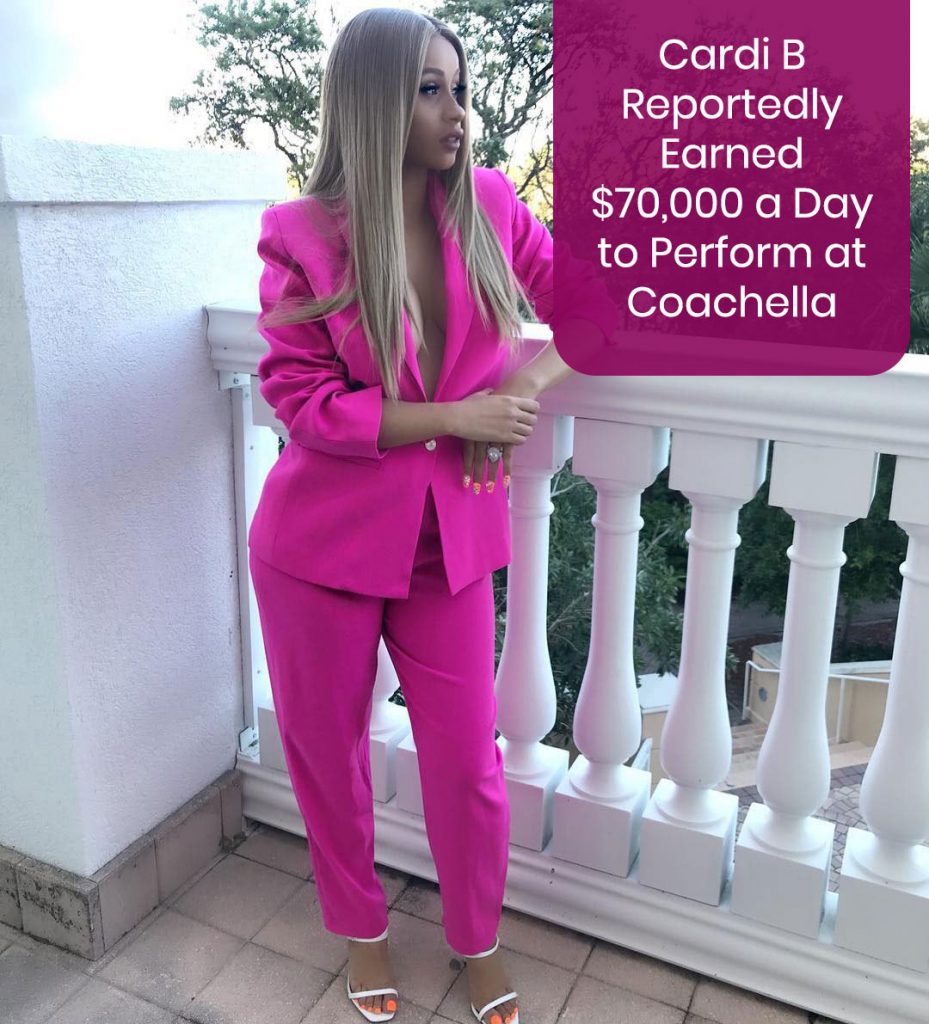 This year, she reportedly earned $70,000 a day to perform at Coachella, although she did have to spend her own money first on her stage set. Cardi B admitted that “it’s crazy” but “it’s an investment.”

Cardi B has a partnership with Steve Madden for a collection of shoes and sunglasses from the brand’s existing line. They also have a video series called Daily Tips With Cardi B.

She looks like a Drug dealers wife ???….Boots: @stevemadden !!You too can get the look maaa!!

Some of the products sold include silver boots adorned with sparkles, thigh-high boots with skinny stiletto heels, and sleep pumps in different colors. The prices range from $36.00 for a pair of yellow-lensed sunglasses to $230.00 for white platform boots.

Today, Cardi B has the power to influence the sales of a big brand if she endorses it. For example, she referenced Christian Louboutin in her song “Bodak Yellow” with the iconic line “These expensive, these is red bottoms, these is bloody shoes.”

Thanks to this, search for the brand went up by 217% according to Business of Fashion.

In February 2017, Cardi B partnered with M.A.C. and Rio Uribe’s Gypsy Sport for an event for New York Fashion Week. She also promotes creations by designers like Marc Jacobs, LaQuan Smith, Kanye West, and Christian Louboutin.

Even though Cardi B has been on the block for just a few years, she is already filling her closet with awards that she has been getting of late. She has already won five BET Hip Hop Awards like Best New Hip-Hop Artist, Hustler of the Year, and Best Mixtape. She has also won two iHeartRadio Music Awards, one Shorty Award, and one Soul Train Music Award.

In 2017, she was nominated for BET Awards, Billboard Music Awards, Grammy Awards, MOBO Awards, and Nickelodeon Kids’ Choice Awards. This is a huge achievement considering that the rapper only has one studio album and two mixtapes to her credit—and she’s just getting started!

My, How the Tables Have Turned

Nowadays, Cardi B makes so much money that when she goes to cities like Houston, she only stays at The Four Seasons, which charges upward of $1,000 a night!

She never stays at the Hilton because she was once thrown out by the hotel for allegedly smoking weed in her room.

One of the first things that Cardi B did after coming into some serious money was to buy a brand new bright orange Bentley for a whopping $240,000—even before she learned how to drive! She later bought an SUV for her mother.

Cardi B also bought a gleaming red Rolls Royce for her hubby-to-be Offset, for his birthday in 2017.

Cardi B bought a wrist watch for herself that cost her $100,000 and loves to wear it on every suitable occasion.

When the rapper’s boyfriend, Offset, proposed to her, he gave her a huge, eight-carat tear-shaped diamond engagement ring that cost him a whopping $500,000! Cardi B’s engagement ring is surrounded by nearly three more carats of diamonds and pink and white stones.

Cardi B loves to buy her boyfriend (now fiancé) jewelry now and then. She bought a miniature house for him in February 2018, which is bejeweled with diamonds that he could wear around his neck.

The pendant is covered with 150 carats of diamonds and reportedly cost her $250,000. It came complete with graffiti, an oven, and two figurines of Offset!

A Penchant for High Fashion

Now that Cardi B has some serious cash flow, she makes sure that she is exquisitely dressed for every occasion in designer clothes. 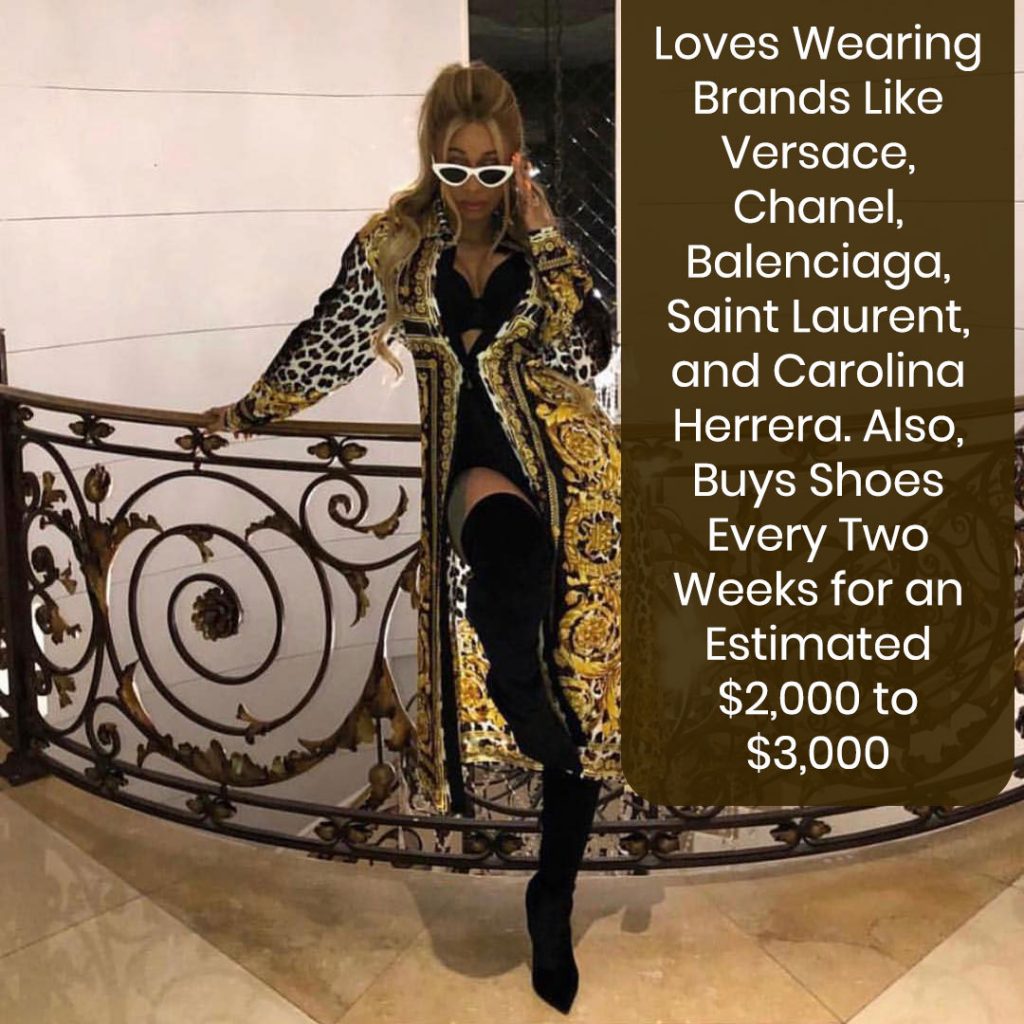 A Double Dose of Happiness

Right now, Cardi B is looking forward to the two most important events in her life that are about to happen soon. The birth of her first child with Offset, as well as her marriage to him.

Cardi B and Offset got engaged on October 27, 2017, and their happiness knew no bounds when they found out that she was pregnant with their first baby! Although she hid her bump while the world speculated her pregnancy, Cardi finally let everyone in on her secret in a big way!

On April 7, 2018, Cardi B revealed on Saturday Night Live that she was pregnant with Offset’s baby.

Cardi B’s Estimated Net Worth Compared to Other Rappers