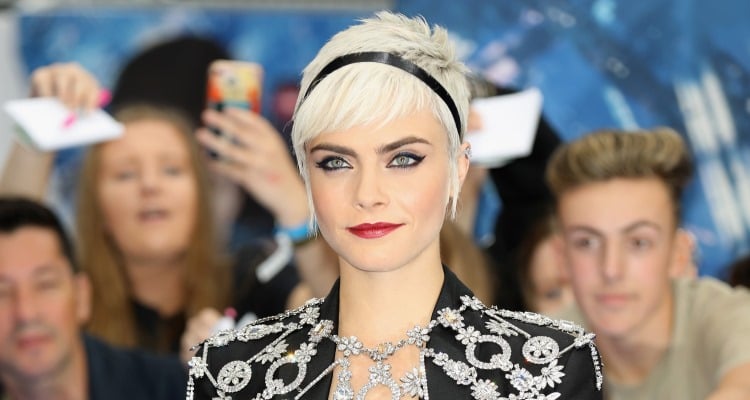 Valerian and the City of a Thousand Planets star, Cara Delevigne is celebrating her 25th birthday Saturday! Cara Delevigne’s net worth in 2017 of $18.0 million is impressive, especially considering the young starlet is only turning 25! We’ve got some interesting facts about Cara Delevingne’s movies, tattoos, career, and more!

She’s only been in the cinema spotlight for a few years now, but already she is a face that everyone will recognize. Cara Delevigne, age 25, is known for her thick and dramatic eyebrows, bubbly personality, impressive photobombing skills, and recently, her singing skills, too! The model is adding to her A-list status with more time on the big screen. Valerian and the City of a Thousand Planets recently hit theatres, and the star can proudly be identified in yet another fascinating cinematic role. How rich is Cara Delevigne? Here’s all you need to know!

Delevigne’s first movie role was already a huge hit, considering she had never stepped foot on stage before. Anna Karenina (2012) was her first big screen movie role and she played Princess Sorokina. Her consecutive feature film roles included Melanie in The Face of an Angel (2014), Margo in Paper Towns (2015), Mermaids in Pan (2015), Viola in Kids in Love (2016), June Moone in Suicide Squad (2016), Annetje in Tulip Fever (2017), and most recently, Sergeant Laureline in Valerian. She is set to star in some upcoming movies in the next year, including London Fields (2017), and Fever Heart and Life in a Year, both in 2018.

So excited for the @valerianmovie premiere tonight. Can't wait for you all to see it on the 21st July. @lucbesson @badgalriri @danedehaan

Being a visual symbol of art and beauty, it’s no wonder the model and actress decided to get a few tattoos. Cara Delevigne’s tattoos include a snake skeleton on the back of her hand, a pair of eyes on the back of her neck, an elephant sketch on her forearm, emojis on the bottoms of her toes, the initials “AC” on her pinky finger, a lion on her index finger, a coat of arms on her ribcage, four white dots on her ribcage, a wasp on her middle finger, “BACON” on her right foot, a dove on her finger, “breathe deep” on her right bicep, “DD” on her hip, a Thai Yant tattoo on the back of her neck, and possibly more!

Everyone should have access to clean water…. Support @drop4drop this World Water Day #W4Water ?post your own W pics and help spread the message

Born in London, England to Pandora Anne and Charles Hamar Delevigne, Cara Jocelyn grew up in a prominent upper-class family. Cara Delevigne’s sisters are Poppy (also a model) and Chloe. Her ancestors include Viscounts (Greenwood), Baronets (Hulton, Faudel-Phillips), Majors, and Lord Mayors of her respective city.

With such a busy career, it can be challenging to maintain a relationship, but Delevigne has had her share of them. If you’re wondering who is Cara Delevigne’s boyfriend, you may be surprised to know that her latest relationship was with a woman by the name of Annie Clark (better known as St. Vincent), an American musician, singer-songwriter, and multi-instrumentalist. The couple split up last year while the model was on her promotional tour for Suicide Squad, so it looks like she is currently on the market! In the past, she was sighted or rumored to be dating the following people: Jay Electronica, Jake Bugg, Gaz Beadle, Michelle Rodriguez, Sienna Miller, and Jack O’Connell.

Career in Modeling and Acting

She began her career as a fashion model, making her first appearance in Vogue Italia at the age of 10. She eventually moved up in the ranks, becoming the face of Burberry’s Beauty campaign. Due to her beautifully stunning features, she has been featured in many advertising campaigns for brands including H&M, Chanel, and Zara. She paraded her slender figure down the catwalk for Moschino, Jason Wu, Burberry, Oscar de la Renta, Dolce & Gabbana, Stella McCartney, and Fendi. The fashion industry is her playground, as she also appeared on the covers of Vogue UK, Vogue Korea, i-D, Jalouse, Russh, and Style.com’s Spring 2013 issue. In 2012, she strutted her stuff at the Victoria’s Secret Fashion Show.

As a young millennial, Delevigne is making waves on social media for her quirky personality, seductive selfies, and her bold statements about current social issues. All of this attention has made people curious as to how much money she makes. As of 2017, she has a net worth of $18.0 million and it looks like that figure will keep growing!