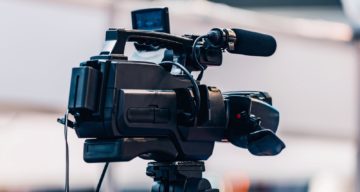 Changes are coming to WLWT’s weather lineup, and Cincinnati, Ohio, residents have to prepare to say farewell to one of its favorite meteorologists. Cameron Hardin has been on the weather team at the NBC affiliate for three years, but will not be continuing for a fourth. Hardin announced that he is leaving WLWT by the end of 2021. Fans were naturally surprised by the news. In addition to his timely weather updates, Hardin’s humor and his chemistry with his co-anchors further make him a beloved personality in the local community. Regular viewers want to know where Hardin is going next and if it means he is leaving Cincinnati. Here’s what Cameron Hardin had to say about leaving WLWT.

Indiana native Cameron Hardin has degrees in communication, journalism, and meteorology from Purdue University. He started his broadcast career at an Indiana station before moving to Ohio in 2018 where he was a meteorologist at Cleveland’s WEWS.

Hardin joined the weather team at WLWT in Cincinnati in 2019. He was co-anchoring mornings alongside Kelly Rippin until very recently. WLWT viewers are probably aware that Rippin welcomed a son on November 12.

WLWT announced changes in the anchor’s schedule, as Rippin would be on leave for the coming weeks. Megan Mitchell has been appointed to fill in for Rippin until February.

They say all good things come to an end. Today was our last weekend show. Meg is filling in for Kelly until February & my last day is Dec 31. It’s emotional. It’s sad. It’s tough… I love Meg and I love this team. Thank you for having fun with us the last 3 years, it was a blast! pic.twitter.com/wDyiXOfcL2

However, this isn’t the only change in the WLWT lineup coming. Hardin also announced that he and Mitchell filmed their last weekend broadcast on November 21.

Hardin announced on air and on his official social media pages that he will be leaving WLWT by the end of 2021. His last day is on December 31.

The weatherman and his wife, Hannah Shanae, welcomed their first child, a daughter they named Wren Lucia Hardin, on May 16, 2021. He’s been dividing his time between his family and work, but he’s apparently taking a step back from broadcast now.

Cincinnati’s favorite weatherman hasn’t explained why he is leaving WLWT and where he is going next. Among the many queries, viewers also asked if he is leaving Cincinnati.

Not sure yet. Will be in Cincy until I find something. Still a few more fun weeks here!

Also Read: Casey Lehecka Leaving WAVY-TV 10: Why Is the Meteorologist Leaving the Station?

In response to a fan’s tweet, Hardin said he has no new job lined up or immediate plans to leave Cincinnati. He’s going to make the most of his last few weeks at WLWT and perhaps find another job.