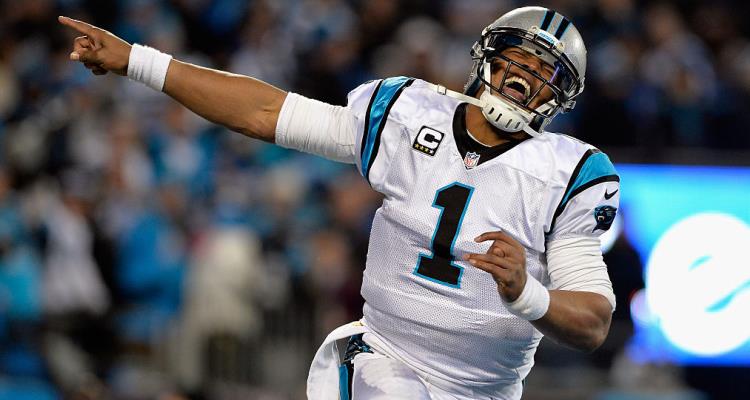 The Carolina Panthers posted a video on their Instagram (@panthers) account Thursday of Cam Newton answering a phone during his press conference on Wednesday. The thing is, the phone wasn’t his, but belonged to a reporter who was recording his interview and forgot to set it to airplane mode—oops! Cam Newton’s injury status is currently set to “questionable” on Fox Sports’ player profile, after the quarterback suffered a concussion against the Falcons in Week 4. He did, however, miss the next game against the Tampa Bay Buccaneers. In the press conference Newton said, “Part of me is happy for it, just to know and go through it. Part of me is like, that could have been preventable. Just run through the damn end zone Cam, and everything will be alright.” Newton continued to say he learned his lesson! For more information about Cam Newton’s background, Cam Newton’s salary and more, check out our Cam Newton wiki!

Cameron Jerrell Newton, the American football quarterback for the Carolina Panthers, was born May 11, 1989 in Atlanta, Georgia. He has a net worth of $45.0 million. He played football in college and in 2011 he was drafted as the first overall pick by the Panthers in the NFL Draft. Newton is an extra special player, as he is the only one in the modern era to be awarded the Heisman Trophy, win a national championship and be the first overall pick within a one-year span in an NFL Draft! He was also named to the NFL All Pro First Team in 2015. Newton became the first NFL quarterback to throw for 400 yards in his first game and broke the record for passing yards by any QB in an NFL debut. Newton finished off several other huge career accomplishments with MVP honors, a 15-1 win for his team and a trip to Super Bowl 50 in 2015.

Don't let your phone go off when @cameron1newton's around. He'll answer it…

The 27-year-old has a son named Chosen with his girlfriend of three years, Kia Proctor. He announced the birth of his son on Twitter in December 2015. Chosen Sebastian Newton was born on Christmas Eve in Atlanta, GA and the happy new father left practice early to get to the hospital to attend his son’s birth!

My longtime girlfriend and I were extremely blessed to have a son last week. Our family is excited and thank you all for the well wishes!

Although Newton prefers to keep his personal life private, he did talk about his son’s birth in a press conference saying, “All fathers can speak on [this] – when you see life come into existence, it’s a wonderful thing. These past couple of days have been so monumental for me.” This is Newton’s first son, but his girlfriend has a second child from a previous relationship.

He Has a Family of Athletes

Newton’s father is Cecil Newton Sr., who was cut as a safety from the preseason rosters of the Dallas Cowboys in 1983 and the Buffalo Bills in 1984. His younger brother is Cecil Newton Jr., who plays center for the Baltimore Ravens. The youngest of the Newton brothers is Caylin, who plays as a starting quarterback for Grady High School in Atlanta. To see Newton’s family photos and more, check out his Instagram (@cameraon1newton).