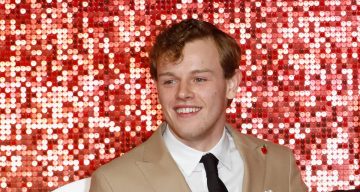 Callum Woodhouse at the ITV Gala held at the London Palladium on November 9, 2017 in London, England. (Photo by Tristan Fewings/Getty Images)

The Durrells in Corfu is the feel-good dramedy that’s returning with an all new season on September 30, on PBS. English actor Callum Woodhouse landed his first big part of his career when he was cast to play Leslie Durrell, the heartthrob of Corfu in the hit British series. The spotlight’s now on this rising actor, who’s expanding his repertoire early in his career.

Who Is Callum Woodhouse?

Actor Callum Woodhouse looks like he’s made for the Mediterranean clime of Corfu, but he actually hails from Durham, England. Born to Kevin and Gail Woodhouse on January 7, 1994, Callum Woodhouse’s age is 24 years old.

His father works at an oil company as a managing director, and his mom is a nurse practitioner.

The youngest of three children, the actor has an older brother, Kyle, and sister named Abbie. The Woodhouse clan often post about their family escapades on their respective Instagram pages.

Callum Woodhouse attended Ian Ramsey School from 2005 to 2010. Although he has no family history of acting, he was set on a path to become an actor at a young age while performing with amateur drama groups.

Kevin Woodhouse, who proclaims his son is one of the best actors in the world, would love to take credit for Callum’s acting prowess.

“My dad always likes to credit himself for my acting roots because he played Joseph when he was in primary school – so maybe that’s where it all stemmed from,” quipped the 24-year-old.

He graduated from Stockton Sixth Form College in 2012, where he studied A-levels in English language, media studies, and theater. His background led him to study at the most prestigious performing arts school, the London Academy of Music and Dramatic Arts (LAMDA).

Callum Woodhouse on The Durrells in Corfu

Woodhouse was set to graduate from LAMDA when he had auditioned for the TV adaptation of Gerald Durrell’s autobiographical trilogy. He had a chemistry read the next day of the audition with Daisy Waterstone, who plays Leslie Durrell’s sister, Margo.

That same day, he was getting ready to portray Captain Stanhope in Journey’s End for his final school play when his agent called him.

“My agent rang me and said, ‘You’ve got it.’ And then I went on and did the play, playing the role of Stanhope, and had to be depressed and very moody – which was hard,” he recalled.

Woodhouse was ecstatic to debut with a big role. He had read the first of Gerald Durrell’s books at the time and loved it.

The pre-war comedy-drama is set in 1935 and follows the adventures of the Durrell family. Widowed matriarch Louisa Durrell (Keeley Hawes) relocates with her four children to the Greek island of Corfu when they fall upon dire financial times.

Hilarity and entertainment ensue when the family has to adapt to the minimal lifestyle of Corfu, which is in stark contrast to that of England.

Leslie Durrell is an attractive young man who loves to hunt the food his family will eat later. He adores his mother and locks horns with his younger brother, who wants to protect animals.

For his role, Woodhouse had to acquire a new set of skills that included dismantling, loading, and firing guns from that era, as well as skinning rabbits.

The Durrells in Corfu premiered in the UK in April 2016. Woodhouse had graduated from LAMDA in July, a year before the premiere.

The cast and crew of The Durrells in Corfu are in awe of Woodhouse’s acting skills. Executive producer Sally Woodward Gentle thinks he’s a great fit for the show with his “comic timing” and “1930s legs.”

Long before he landed a role on the show, Woodhouse claimed he preferred acting on stage rather than in front of the camera, even though he was open to new opportunities.

“I knew I was going to be doing it, even before I graduated, so it was a lovely feeling to be leaving knowing this amazing job was there,” Woodhouse said, despite being nervous about acting with the marvellous Keeley Hawes.

Sorry, Girls—He’s Off the Market!

Talk about being one sought-after Bachelor! Leslie Durrell has had three ladies fight over him, but Callum Woodhouse appears to already be taken. His Instagram shows plenty of snaps of him Callie Cooke, who he evidently adores!

But he hasn’t let all the fame and adoration of his growing fan base go to his head. He stuck to his theater roots, acting in the critically acclaimed production of Hampstead Theater’s Filthy Business. Critics found his performance in the play at par with iconic actress Sara Kestelman.

Judging from his Instagram, Callum Woodhouse and Callie Cooke are more than just costars. She features prominently in his Instagram posts, and fans are already fawning over the two of them online.

In April, Woodhouse revealed that they had been together for a year. They wrote joint blogs together during Filthy Business rehearsals, where they gushed about their Valentine’s Day Subway date.

Since being cast in The Durrells in Corfu, Callum has been expanding his resume. He landed minor appearances and worked in short films.

But he’s not limiting himself to just acting. The young star wrote, produced, directed, and acted in the short film, The Hoist.

But it’s not the first time Woodhouse had to get hands on with a film. When he was at Sixth Form College, he helped a friend make a movie for his A-level studies. The film ended up winning a Royal Television Society (RTS) Award.

“He had to make a film for his course and left it until the last minute. We just went out with a camera and thought ‘What can we do?’ We never thought anything would come of it so it was great that it did well,” said Woodhouse.

Now, he’s on a trajectory to stardom.

Don’t miss Callum Woodhouse’s latest adventure when The Durrells in Corfu premieres on September 30, 2018 at 8:00 p.m. EST on PBS!