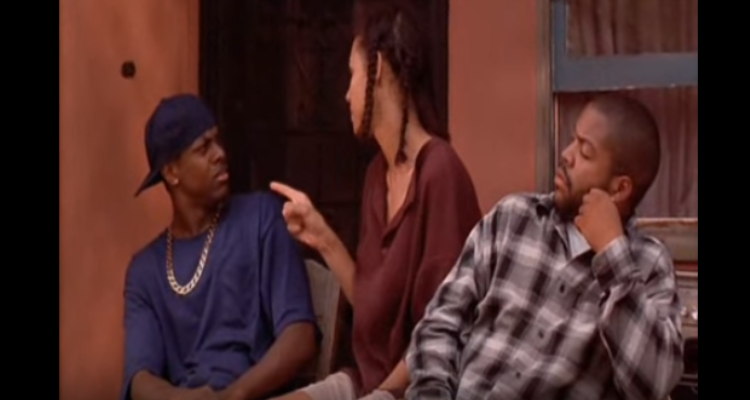 What does “Bye, Felicia” mean? It’s a slang term that has been tweeted thousands of times and, although people know how to use it by now, there are some that may not know where the popular saying came from. For those who don’t already know, “Bye Felicia’s” meaning came from the hit 1995 comedy Friday, starring Ice Cube and Chris Tucker. The term was coined by Cube’s character, Craig, when he tells his love interest’s sister (spelled “Felisha,” played by Angela Means Kaaya) to go home by saying “Bye, Felisha.” Her character was often annoying and always asking for something, generally bothering everyone around her. The term is used to dismiss anyone irritating or seemingly unimportant. (If you can master Chris Tucker’s flick of the wrist to go with it, you’ve got your “Bye Felicia” game on point!)

The term seemed to be forgotten after that, but has been used on and off for years, until it came back into the mainstream a couple years ago, when the same line was heard in Straight Outta Compton. The Twitter hashtags and memes have been endless ever since with “Bye Felicia” quickly becoming a part of everyone’s vocabulary.

In an interview with Good Morning America’s Michael Strahan, Manigault said that she resigned and would be writing a book about her time in the White House.

There “were a lot of things that I observed during the last year that I was very unhappy with,” Manigault told co-anchor Strahan. “But when I have my story to tell as the only African-American woman in this White House, as a senior staff and assistant to the president, I have seen things that have made me uncomfortable, that have upset me, that have affected me deeply and emotionally, that has affected my community and my people and when I can tell my story, it is a profound story that I know the world will want to hear.”

After the segment, Roberts said: “She said she has a story to tell and I’m sure she’ll be selling that story. She will. Bye Felicia.”

Was it professional, probably not, but Roberts’ face said it all. Manigault has been known to do whatever she can to stay in the public eye and she’s been shunned by majority of the black community for siding with president Donald Trump. Does anyone remember when she said we all had to bow down to him? Well, she did and now she’s being dragged by Internet memes and comedians for being ousted out of the president’s inner circle.