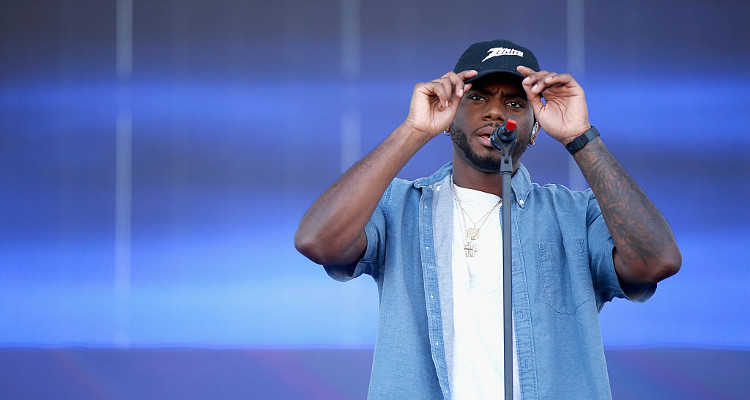 R&B singer Bryson Tiller surprised fans in the best way possible. Instead of dropping his sophomore album in June, he released it today. Needless to say, fans can’t get enough of Bryson Tiller’s new album, True to Self.

Drake-approved R&B musician, Bryson Tiller’s songs are going to be on repeat all weekend. Tiller dropped his new album, True to Self a whole month early. Originally scheduled for June 23, Tiller had already revealed the track list. Travis Scott was even raving about his songs and hinting at future collaborations with Tiller. Here’s more about the hitmaker and his new album in our Bryson Tiller wiki.

Bryson Djuan Tiller was born in Louisville, Kentucky. When he was four years old, his mother passed away, so he and his four brothers were raised by their grandmother. In high school, he started rapping and singing before performing for the girls in school. After dropping out of school, he worked part time at Papa John’s and UPS. When he wasn’t working, he composed music in his living room.

He was inspired by Drake and Dream and wanted to be a songwriter “But then everything just happened differently.” His music career began in 2011 but with 2014’s hit single, “Don’t” he became a breakout artist everyone wanted to sign. The song was later included as part of Tiller’s debut studio album which peaked at #13 on Billboard Hot 100.

Before “Don’t,” he was a struggling musician who had to live out his car. “Not too long ago was the anniversary of when I dropped ‘Don’t’ on SoundCloud and I was just like, staring at the ceiling when I woke up that morning like, wow, I was sleeping in my car around this time just a year ago,” he said about the impact his single had on his career.

#2. He Turned Down a Record Deal with Drake

With the attention he was getting, it was not long before Bryson Tiller co-signed a record deal with Timbaland and Drake. The deal opened up opportunities for him, including a creative partnership with RCA. His debut album, Trapsoul debuted at #11 on Billboard 200. His rising career earned him a spot on Forbes‘ 30 Under 30 list this year and he already has a net worth of $2.0 million.

The success of Trapsoul also led him to collaborate with prominent hitmaking producers behind the music of Nicki Minaj, Jay-Z, Rihanna, Drake, and Kanye West. Drake was so impressed by his work in Trapsoul he personally texted Tiller with an offer to sign with his label, OVO Sound. But after much deliberation, Tiller decided to turn him down and sign with RCA instead. Nevertheless, the two remain good friends.

#3. He Sees Kanye West as a Father Figure

Dubbed as the next Usher, Tiller looks up to quite a few artists. He’s close to Drake who was an inspiration for him growing up. He also says Omarion and his debut album inspired him to start singing.

While he’s close to many artists, he looks up to Kanye West and sees him as a father figure for many reasons. “He’s just, he’s a father. He’s out here getting it. And he recently tweeted something like ‘Do everything you possibly can in one lifetime’ and I was just like, you’re right,” Tiller was quoted saying in an interview.

#4. He has a Beautiful Daughter

The 24-year-old has a daughter named Harley who frequently appears on her dad’s Instagram. The three-year-old’s mother is Markea Bivens. Reports claim that she is his longtime girlfriend and they are engaged.

There are rumors, however, that Bivens and Tiller aren’t engaged. In fact, there are claims that they aren’t a couple at all and merely co-parent their daughter together. Whether or not that is true can only be confirmed by Tiller. In the meantime, he devotes himself to Harley and is a doting dad. Just take a look at his Instagram!

Earlier this month, Bryson Tiller detailed his upcoming album with a preview of three songs and the track list. He announced that the release date would be June 23, 2017. I guess the excitement got the better of him as he tweeted, “i know we said June 23rd… but i say we Set it Off Tonight!! ALBUM OUT NOW.”

True to Self is now available —a month earlier than expected! Tiller also dropped a new music video for the album’s lead single, “Somethin’ Tells Me.” Check out the music video below and stream the entire album on iTunes and Spotify.