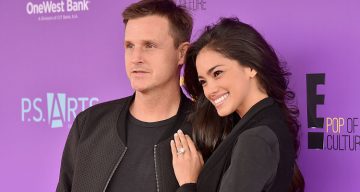 We don’t see much of Rob Dyrdek on TV these days, but that doesn’t mean his life is any less exciting. The skateboarding star has a beautiful woman, Bryiana Noelle Flores, by his side, and a mini-Dyrdek who’s almost a year old. Dyrdek always goes the extra mile for his wife, and even proposed to her in a romantically elaborate way. Here’s more about her in Bryiana Noelle Flores’ wiki.

#1. She’s a Model and Entrepreneur

The 25-year-old Flores is a model, designer, and entrepreneur from Los Banos, California. She first gained notoriety as the Playboy Playmate of the Month of September in 2013. She was discovered by the magazine at a restaurant when she moved to LA and soon after, she was dating Dyrdek.

Besides modeling, she was a beauty pageant queen and also coached pageant hopefuls. She’s now a clothing designer and heads Iconic Beauty by Bryiana Dyrdek. It is a woman empowerment brand that helps women in their professional and personal endeavors.

And on special days, Mom makes us wear pink ?

It’s known that everything Rob Dyrdek does is on a ridiculous scale. On the eve of his 41st birthday, the reality star took his then-girlfriend to Disneyland’s stage production of Aladdin. During the show, he slipped out saying he wanted to go the bathroom only to reappear in the grandest way possible.

I always try to be the best boyfriend I can, @bryiana_noelle really wanted to go see the Aladdin Show at Disney… pic.twitter.com/raP92YRkwy

When the parade of animals walked through the audience as a part of the Aladdin show, Dyrdek took the place of Prince Ali atop an elephant. Then, he took Bryiana on the stage, got down on one knee, and popped the question! He documented the entire proposal on his Instagram and Twitter to announce their engagement.

That’s not all! He proposed to Flores with some massive bling. After the engagement, the couple went to the Caribbean for an engagement getaway where she showed off the gigantic diamond sitting on a gold band. The engagement ring price can’t be small as it’s estimated to be around 10 carats. He definitely set the bar for proposals!

No better way to celebrate then enjoying the beautiful crystal blue waters of the Caribbean??☀️❤️ pic.twitter.com/QgNUM8fi5P

The Fantasy Factory host tied the knot with Flores in a grand ceremony with their friends and family in attendance. The over-the-top couple shared the pictures on social media as they always do. They captioned the posts with fantasy-evoking words. “Before you met me I was a fairy princess. I caught frogs and called them prince and made myself a queen. I slept in castles and fell in love because I was taught to dream. I believe in fairytales and dreamers dreams,” the bride wrote.

The couple welcomed their first child together in September 2016. The mini-Rob was named Kodah Dash Dyrdek. The couple documented her pregnancy on Instagram including their “babymoon” vacation and visit to the doctors, where Dyrdek took over the sonogram.