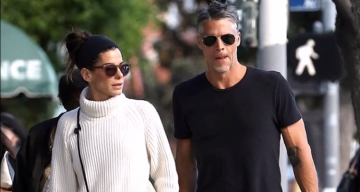 In case you missed it, Bryan Randall and Sandra Bullock have been dating for well over two years now. Though we don’t know exactly when they made things official, it was revealed in late 2015 that their relationship was going strong for “several months.” The couple have been relatively quiet since then, making rare public appearances with not much known about Sandra Bullock’s boyfriend. Our Bryan Randall wiki has everything you need to know about the photographer.

Being named People’s “ Most Beautiful Woman” in 2015 wasn’t even close to the highlight of Sandra Bullock’s year. Really! The star revealed to the magazine that she “told no one” about the label, laughing that it was “ridiculous” before adding that being a good mother is what’s important to her. That’s not the only thing the Oscar winner kept mum about that year. Though spotted by paparazzi in August, it wasn’t until September 2015 that Bryan Randall and Sandra Bullock’s relationship status was made official. The two managed to stay under the radar for quite some time, occasionally being spotted spending some quality time together. They’re still going strong, with a source close to them revealing, “They love each other very much” and “When they are out together, they don’t leave each other’s side.” For more about Sandra Bullock’s boyfriend, keep reading our Bryan Randall wiki.

Who is Bryan Randall?

Though based in L.A., Bullock’s boyfriend is actually from Portland. He’s a model-turned-photographer who now runs his own lifestyle photography company, Bryan Randall Photography. He’s kept a close circle of famous friends since modeling alongside the likes of Cindy Crawford. Working mostly with high fashion brands like Yves Saint Laurent, Randall was a model throughout the ‘90s before stepping behind the camera. Working with The Actor’s Company to take headshots, he was known for “his artistic instinct and compassion for actors to every shot he takes, which is why he is one of the most hard-working and sought-after photographers in this town.”

He was first seen with the Gravity star at Jennifer Aniston and Justin Theroux’s wedding, but the two met months earlier, and he even went to Bullock’s Fourth of July party in Austin that year. Though he’s been running his business in L.A. for over 10 years, details about Bryan Randall’s net worth are unknown.

He Wanted to Be an Actor

Bryan Randall, age 51, has a daughter named Skylar Staten, who was born in the ‘90s. Soon after it was revealed that he was dating Bullock, rumors surfaced that Randall abandoned Staten as a child, allegedly leaving her with her drug addict mother. Whether or not that’s true hasn’t been confirmed, but Staten reportedly moved to L.A. in 2007 to live with her father after the passing of her mother, and the two are said to be “extremely close.” A family friend of the former model calls him “a great guy and had a great family life growing up,” adding, “His parents are amazing people. Everyone is really proud of him for being a talented photographer and model.” Before finding success as a model and later photographer, he enrolled in Anthony Meindl’s Actor Workshop, the same drama school that spawned stars like Shailene Woodley (Divergent franchise), Ian Harding (Pretty Little Liars), and Alexandra Daddario (Baywatch).

Is Sandra Bullock going outside the law for her next marriage?? Get the whole story at https://goo.gl/lL20lY or on PerezHilton.com/Sandra-Bullock

Since dating Bryan Randall, Bullock’s kids, Louis and Laila, have spent a lot of time with the couple as a “family of four.” A source revealed that the couple “are homebodies and just relax at home together with the kids most nights,” adding, “Her kids are her number one priority and always have been. Bryan is like a father to her kids. He adores Sandy.” That same source went on to reveal that marriage might be in the cards for the couple!