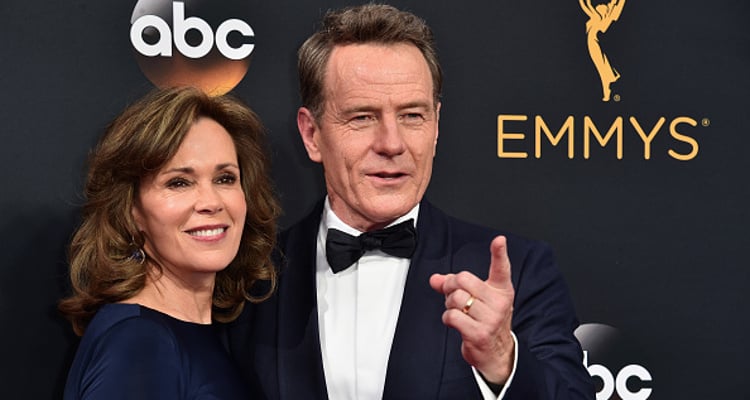 We all know Bryan Cranston as drug kingpin Walter White in Breaking Bad. The versatile actor showed his seamless transition from comedic roles to more dramatic ones. But do you know who Bryan Cranston is married to? For everyone wondering about Bryan Cranston’s wife, here’s the lowdown with Robin Dearden’s wiki.

In 1986, while shooting an episode of Airwolf, Bryan Cranston and Robin Dearden met when Cranston guest starred as a jilted ex who holds a cruise of sorority girls hostage. Dearden was one of the sorority sisters being held hostage. In an interview she recalled that he held a gun to her head when they first met. All Cranston said about that day was, “It was 30 years ago that we met on that terrible TV show, It changed both of our lives.”

Dearden quipped that though they were both involved with other people at the time, she remembered thinking to herself, “He’s kind of cute, he’s got a gun.” Though neither were single, they innocently flirted with each other, thinking that it would not lead to anything more. They bumped into each other about a year later and they noticed that their friendly kiss lingered a little too long. The rest, as they say, is history!

She Is Cranston’s Second Wife

Bryan Cranston was married to Mickey Middleton, a writer. They dated for around a year, and got married on November 10, 1977. But after four years together, the relationship lost its charm, and they split up in 1982.

Had the most vivid dream including this beautiful couple last night, why can’t it be real?? ???????????? #BryanCranston #robindearden #dream

Dearden and Cranston Have a Daughter Named Taylor


Taylor Cranston was born on February 12, 1993 making her age 24. She is following in the footsteps of her parents and has already established herself as an actress in the industry. Taylor was seen in Sweet/Vicious and 101 Ways to Get Rejected, and is welcoming more roles that come her way.

You can tell I’m from California because my driving arm is like six shades darker. ????: @haroldjulian Style : @andrewgelwicks Makeup: @cozzette Hair: @elinhair You guys are AWESOME! Thank you for indulging in my propensity towards prop comedy

Robin Appeared in a Scene of Breaking Bad

In her husband’s hugely successful show about a chemistry teacher-turned-drug-dealer, Bryan Cranston’s wife and daughter both made cameos. Taylor and Dearden appeared as extras on the same episode.

Robin Dearden has had plenty of work as an actress since her appearance with Cranston in Airwolf. She is also known for movies like Last Chance (1999), Wooly Boys (2001), and Myron’s Movie (2004).

[[ HUMBLEBERG! The Cranston talking about his stardom. ???????? ]] Fame came incrementally, and he is glad it didn’t reach this level until he was mature enough to handle it. ‘I’m very grateful, but that attention is still not something that I seek. And when the attention goes away, I won’t be sad. This is what I love to do,’ he says, gesturing round the spartan dressing room. ‘I love to work.’ #brba #breakingbad #bryancranston #aaronpaul #robindearden #vincegilligan #walterwhite #heisenberg #jessepinkman #pinkman #treadlightly #saymyname #bbaddict #brosenbergs #legends #kingcranston #thecranston