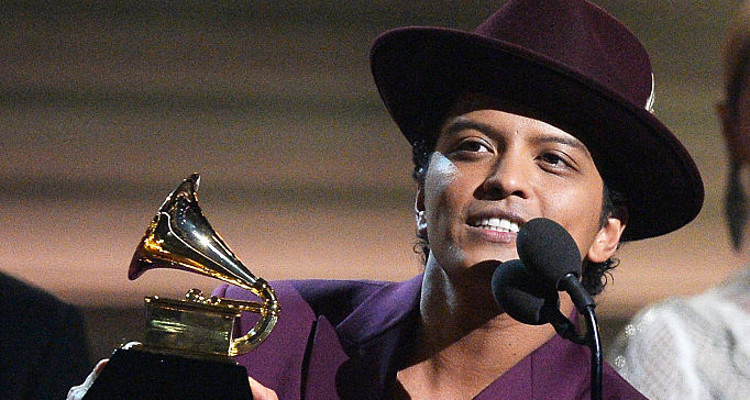 Bruno Mars’ real name is Peter Gene Hernandez. He changed his name because he wanted to avoid being typecast, and boy, did it work out for him! Bruno Mars is an American singer, songwriter, multi-instrumentalist, music producer, and choreographer. In his musical career thus far, Mars has sold more that 100 million albums and singles, already making him one of the best selling artists of all time. Now that he’s topped the charts and become so famous, people are curious about Bruno Mars’ net worth. Don’t worry, we will tell you all about it right here in our Bruno Mars wiki! The good news for Mars’ fans is that he is releasing his brand new album, 24K Magic on November 18, 2016! Bruno Mars’ new song (released as a single) is the title track off his much awaited album.

Music in His Genes

Mars was born in Honolulu, Hawaii and was raised in the Waikiki neighborhood of Honolulu. His parents met when they were performing in a show together! His mother was a hula dancer and his father played percussion. People are often curious about Bruno Mars’ ethnicity. Bruno Mars’ father is half Puerto Rican and half Jewish, while his mother is of Filipino and Spanish descent. Since Mars’ family were also musicians, he was exposed to music at an early age. Mars grew up listening to reggae, rock, hip hop, and R&B and decided to be a musician himself. He did a terrific impersonation of Elvis Presley and modeled himself after the idol.

Mars moved to Los Angeles in 2004 to pursue a career in music. After some hard times where he was rejected as a singer by many labels, Mars decided that the best way to further his career was to write and produce hits for other artists. He became a successful music producer and produced hit music for artists like Alexandra Burke, Travie McCoy, Adam Levine, Brandy, Sean Kingston and Flo Rida. His vocal skills were noticed when two songs on which he was featured, topped charts worldwide. They were B.o.B’s “Nothin’ On You” and Travie McCoy’s “Billionaire.”

Mars’ hard work and persistence finally paid off when he was able to release his first solo album, Do-Wops & Hooligans in 2010. The lead single “Just the Way You Are” was a chart-topper and subsequent singles like “Grenade” and “The Lazy Song” were hugely successful, as well. His second album, Unorthodox Jukebox was a monster seller. Singles like “Locked out of Heaven,” “When I was Your Man,” “Treasure,” and “Young Girls” scorched the charts worldwide and made Mars the second most famous Hawaiian native since Barack Obama. Bruno Mars’ current net worth is at a staggering $90.0 million! He also earns a hefty amount of money from his live shows and stage performances.

Is Bruno Mars Gay or Straight?

Especially with his skyrocket to fame, many have begun to question Bruno Mars’ sexuality, and with no wife in the picture, there have been rumors about Mars’ sexual preference. People are wondering, “Is Bruno Mars gay?”. Though some media outlets have reported that he is homosexual, the singer himself has strongly refuted these stories. Mars says it’s a total and and completely fabricated. In fact, Mars has had a girlfriend named Jessica Caban since 2011. Though she stays out of the spotlight, Caban is an American fashion model and actress. Bruno Mars’ girlfriend has won some major beauty contests. It makes you wonder now if all those love songs are about her!

All Eyes on Mars

Right now everybody’s eyes are on Bruno Mars’ new album 24K Magic. It is being touted as one of the most important album releases of this year. Mars has had a tough time the last four years . First, he lost his mother and then faced a hoard of legal issues, including charges for possession of cocaine. He has cleaned himself up and fought his way out of these issues, and now, his much awaited new album is set for release. His fans have waited for four years for this highly anticipated album!