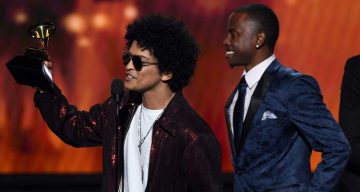 For those watching the 2018 Grammys live stream, there was no predicting who would be the biggest winners of the night! But those who didn’t watch the awards ceremony are probably wondering who won the Grammys Song of the Year category. Well, it was none other than Bruno Mars!

The hottest names in music were gathered at Madison Square Garden in New York City for the industry’s biggest night—the Grammy Awards 2018. Featuring amazing live performances and collaborations, one of the biggest honors of the night has to be the Song of the Year.

Bruno Mars’ “That’s What I Like” won the coveted award for Song of the Year. The song is from Mars’ third studio album, 24K Magic.

The Grammy Award for Song of the Year is one exciting category. The nominees this year included heavyweights like “Despacito” by Luis Fonsi and Justin Bieber, “4:44” by Jay-Z, Julia Michaels’ debut track titled “Issues,” “1-800-273-8255” by rapper Logic, and Bruno Mars’ “That’s What I Like.”

It’s the fourth time Mars was nominated for Song of the Year, but it’s his first time winning! His songs, “Grenade” and “Locked Out of Heaven,” previously lost in this category.

“That’s What I Like” is the highest charting single from 24K Magic, surpassing the title track. It resided on the Billboard Hot 100 for 28 weeks. The song peaking at No. 1 and was one of the longest-running top 10 hits of all time.

Well, there’s no doubt that Bruno Mars brought some “24K magic” to the Grammys last night!