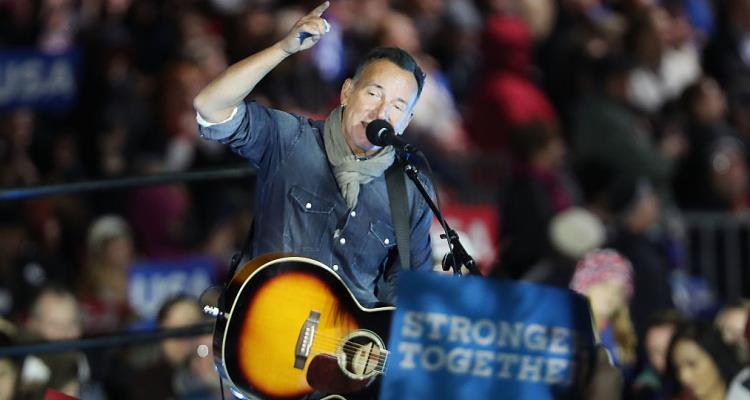 He was reluctantly and ironically nicknamed “The Boss” because of his hard-working, go-getter attitude and now, Bruce Springsteen’s net worth has skyrocketed. With a highly successful career spanning more than five decades, he’s been regarded as the outspoken voice and hero of the working-class people. How much is Bruce Springsteen worth in 2017? Read on to find out!

A proud American and New Jersey native, Springsteen passionately sings about the everyday struggles of blue-collar people. He delivers artistic and poetic portrayals of the seemingly unachievable and wholly intangible notion of the American Dream alongside his E Street Band. Depending on your definition of what constitutes the American Dream, however, it would appear as though Bruce Springsteen has been immensely successful in attaining it. Since most people tend to define The American Dream based mostly on financial success, wealth, and worldwide recognition, that seems like a safe bet. On that note, it’s fair to ask, how much is Bruce Springsteen worth in 2017? Continue reading to find out Bruce Springsteen’s net worth and everything else you could possibly want to know about The Boss!

What is Bruce Springsteen’s Net Worth?

Summing up Bruce Springsteen’ career based on the amount of money he’s generated through album and concert ticket sales over the years seems almost counter-productive to the message he’s been trying to communicate to fans all along. In a perfect world, people wouldn’t measure a person’s success by how much money they make and would instead base it on the merits of, and reception to, their body of work. Unfortunately, that’s not how things work and people will always be fascinated by the ins and outs of the lives of celebrities. As Springsteen sings in his 1978 single, Badlands, “The poor man wanna be rich, the rich man wanna be king and a king ain’t satisfied ‘til he rules everything.” With profound lyrics like that, it’s no wonder that Springsteen is a beloved rock ‘n’ roll icon! Considering he’s been in the music business for as long as he has been, it’s a shock he’s still releasing new albums, and continues to go on tour. Having sold over 120 million albums worldwide, as well as earning multiple prestigious awards and recognition, Bruce Springsteen’s net worth is $460.0 million. Take a look at the chart below as we break down how much Bruce Springsteen earned for his music.

How Old is Bruce Springsteen?

Bruce Springsteen was born on September 23, 1949, which means he’ll be turning 68 this year!

The Boss has been married twice in his life. His first marriage to Julianne Phillips was short-lived, having only lasted about four years from 1985 to 1989. They didn’t have any children together. In 1991, Bruce Springsteen married his current wife, Patti Scialfa and they have 3 kids together. Their names are Jessica Rae Springsteen, Sam Ryan Springsteen, and Evan James Springsteen. Bruce Springsteen’s wife, Patti is an American singer-songwriter and guitarist, and was a member of Bruce’s E Street Band since 1984. She first met Springsteen in the early ‘80s at a New Jersey bar and postponed her own solo record to tour with Springsteen.

Speaking of Bruce Springsteen’s tours, he’s earned the bulk of his fortune over the years from his performances alone. Check out the chart below for what he made off his tours!

Thank you New Jersey! Another record-breaking show on Thursday night. Photo by @dannybones64. See more at brucespringsteen.net and see you again on Tuesday!

Earlier this year, Bruce Springsteen’s house in Rumson Township, New Jersey was sold. He’d originally purchased the estate, which was built in 1917, in 1983 with the hopes of having a family and raising his children there. In his 2016 autobiography entitled Born to Run, Bruce Springsteen had this to say about his plans for the Rumson house:

“The house was a rambling old Georgian-style ‘mansion’ on the corner of Bellevue Avenue and Ridge Road. I went through my usual buyer’s remorse, but I held out, promising myself I’d fill the big old house with what I’d been searching for: a family and a life.”

This dream was eventually realized as a result of his second marriage to the love of his life, Patti Scialfa, and the three children it produced. Over time, however, the family found themselves spending more and more time at their Colts Neck property in Monmouth County, New Jersey. The Rumson property was valued at a whopping $3.8 million, with annual property taxes adding up to $44, 460. The reason the Springsteens decided to sell their family home of more than 30 years is because they just weren’t spending a substantial amount of time there to justify keeping it. On top of that, the now famous yearly Springsteen Halloween displays were getting to be far too exuberant for their neighbors, as people from other neighborhoods and counties were bringing their kids to go trick-or-treating at The Boss’s house. The primary reason for the private sale, however, was because the Springsteens favor their Colts Neck property, which also has a 378-acre horse ranch as their daughter, Jessica, is a world-renowned equestrian athlete.

Even though he’s in his late 60s, Bruce Springsteen hasn’t once indicated that he’s thinking about retiring from music. Not only is he still putting out hit records full of memorable and iconic songs, he’s also still touring! Bruce Springsteen’s concert dates for 2017 are coming up and fans are excited to see him hit the stage. Most notably, he’ll be performing five shows a week starting on October 3rd through February 3rd as part of his “Springsteen on Broadway” event at the Walter Kerr Theater. As an arena rocker at heart, this is definitely one of the smallest venues Bruce Springsteen has ever played throughout his illustrious career—the theater holds less than 1,000 people! However, this is still a huge honor for the rock star because it marks his Broadway debut. Additionally, Springsteen will also be making an appearance at the closing ceremony of the 2017 Invictus Games in Toronto, alongside fellow rocker Bryan Adams and other notable musicians on September 30th.