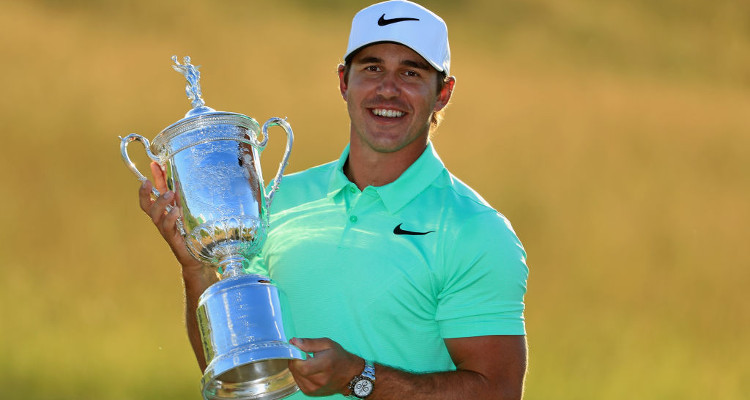 Professional golfer, Brooks Keopka, celebrated his PGA Tour victory on Sunday (June 18), after winning the U.S. Open by four shots and eventually cementing his position as the seventh consecutive first-time major champion. Here is everything you need to know from Brook Koepka’s wiki.

Born on May 3, 1990, Brooks Koepka’s age is 27. Where is Brooks Koepka from? The 27-year-old professional golfer was born in West Palm Beach, Florida and raised in Lake Worth. He attended Cardinal Newman High School before attending Florida State University, where he played college golf while studying social science. At Florida State, he won three events and was also a three-time All-American. Although he was qualified for the 2012 U.S. Open, he unfortunately missed the cut. Brooks Koepka’s parents are Denise Jakows and Bob Koepka. He has a brother named Chase, who is also a professional golfer.

Also Read: McKayla Maroney Now: Facts to Know and Pics to See of the Olympic Gymnast!

In the summer of 2012, Koepka announced his decision to become a professional golf player. He began his first pro tour with the Challenge Tour in Europe. Shortly after, he won his first title at the Challenge de Catalunya in September.

In 2013, Koepka made his debut as a member of the European Tour. The following year, when he played at the U.S. Open, he finished fourth and earned his PGA Tour card for the 2014-15 season, which is when Koepka was nominated for PGA Tour Rookie of the year.

He Won His First PGA Tour Event in February 2015

Proud to join Team ULTRA! Thanks for keeping me well-stocked. Hope to have something special to celebrate when I get back from Augusta. // @michelobultra | #LiveULTRA

After working hard and dedicating himself to the professional golf circuit, Koepka won his first PGA Tour title at the Waste Management Phoenix Open in February 2015. After his win, Koepka said, “It’s unbelievable. I didn’t think I would work my way up this quickly, but playing the Challenge and European tours led to this. And especially the failure I’ve had. I can’t tell you how much I learned from that.”

What do u think of my new #titleist hat?

Despite winning games and tournaments at the collegiate level, things in Brooks Koepka’s personal life took a turn in 2011. His mother, Denise, had to undergo a double mastectomy after she was diagnosed with a rare form of cancer called a triple negative. Rather than give up on his dream, Koepka used the news as a way to play harder, and play for his mother. He spoke about how her diagnosis made him a stronger player, saying, “I am pretty self-motivated and I had a lot of growing up to do. I needed to re-focus. [I needed to] be driven so I can get to my goal of being on the PGA Tour. I had to make some decisions. It helped me get focused on what I wanted to do with my life.” He later added, “I have to give my brother a lot of props on that. He pushed me toward it. He pushed me to see what I could do.”

Koepka’s mother is now cancer free, but he continues to play for her.

While in Florida State, Brooks Koepka met Becky Edwards, and the two dated well into the start of the golfer’s professional career. However, things have since ended between the two. During the U.S. Open, it was revealed that Koepka is currently in a relationship with actress Jena Sims.

This is our time. Let's take back the Cup! #gousa #rydercup

In 2015, Koepka withdrew from the Arnold Palmer Invitational because of a dislocated rib in his lower left back. It was the first time in the history of his career that he ever withdrew from an event. Talking about it, Koepka said, “I don’t quit. From when I started to play golf to today, this is the first time I’ve had to WD and it really pisses me off, to be honest with you.” Well, it looks like the minor setback did not hurt his game as Brooks Koepka landed this year’s U.S. Open title!