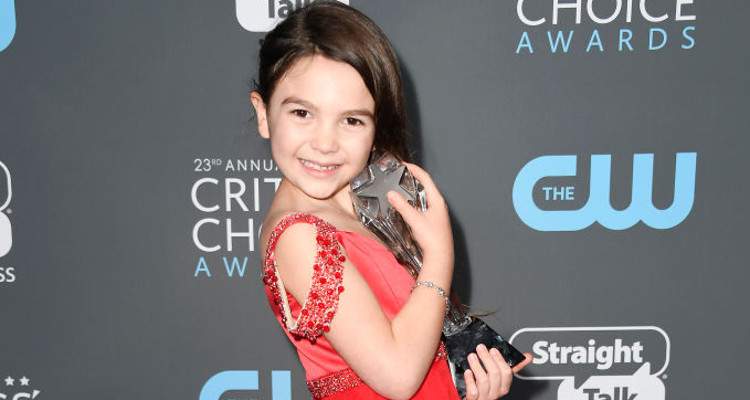 Hollywood is laying out the red carpet and welcoming the cutest little actress in town! Brooklynn Prince, star of the 2017 critically acclaimed drama, The Florida Project, is winning hearts with her sweet smile and spunky personality. If you heard her acceptance speech at last night’s Critics Choice Awards, you’ll know that Hollywood has also fallen in love with her! Keep reading to find out more about Brooklynn Prince.

Brooklynn Prince’s role in The Florida Project is winning her praise from all circles. The young actress added one more jewel to her crown after last night’s win at the Critics Choice Awards. She already took home a few awards this season, and even appeared on various talk shows.

Despite Brooklyn Prince’s age, the seven-year-old is already a star in the making! Her first time in the limelight was a modeling shoot for Parenting magazine when she was just two years old.

Now, Prince has numerous roles lined up and will soon be seen in Monsters at Large, which is scheduled to be released this year. Her other upcoming projects include The Turning and The One and Only Ivan, which are still in pre-production.

Head over to her Instagram, and you’ll see Prince posing with celebrities, visiting Disneyland, and having fun with her family!

Disneyland was a burst of happiness. ???

Brooklynn Prince’s parents are supportive of their daughter, and accompany her to shoots and award ceremonies.

She shared that she was making a romance home movie in New York as an anniversary present for them.

Brooklynn Prince in The Florida Project

Brooklynn Prince’s burst into the showbiz scene as a six-year-old left to fend for herself in The Florida Project. Her role as Moonee, the little girl with a single mom living in a cheap motel in Florida, was a perfect fit for the young performer.

Prince said about her role as Moonee, “She likes ice cream and she loves maple syrup, but other than food, she loves to get into mischief and spit on cars, and she just loves hanging out with her mom also.”

In her long and sparkly red dress, Brooklynn Prince was emotional as she went on stage to accept the Best Young Performer Award at the Critics’ Choice Awards last night. Her adorable speech made our hearts melt!

She made sure to acknowledge the other nominees saying, “This is such a big honor, all the nominees are great. You guys are awesome, we should go and get ice cream after this!”

Prince ended with a plea, “I would like to dedicate this award to all the Moonees out there. Guys, this is a real problem. You need to go out there and help. Thank you so much.”

We’re surely going to see a lot more of Brooklynn Prince in the years to come. You, go girl!