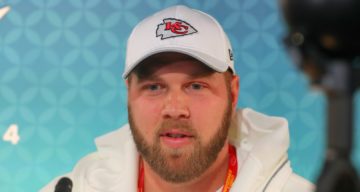 Brooke Squires had become a familiar face among Kansas City Chiefs fans since her husband, Mitchell Schwartz, signed with the team in 2015. But the Chiefs let the offensive tackle go in March 2021, and the couple are now prepared to bid farewell to Chiefs nation. While Schwartz’s wife is a popular personality on social media, more people are discovering her, especially after the recent news. For her new followers who want to know more about Mitchell Schwartz’s wife, this Brooke Squires wiki is the perfect primer on her.

Brooke Lynn Squires was born on July 20, 1993 and is native of Ohio. She is one of two children born to Dan and Sherri Squires.

They raised Brooke and their son, Stone, in Amherst. Dan Squires served as the service director of the city of Vermilion from 2006 to 2010.

Brooke and Stone’s mother, Sherri Squires, passed away on January 25, 2021 after being diagnosed with cancer in September 2020.

Schwartz played his final season with the Cleveland Browns in 2015. Brooke Squires was at a Browns game with her friend when she struck up a conversation with a guy near her seat.

That person probably thought Squires would make a good match for his friend, and asked if he could pass her number to him. Squires reluctantly did, only to later discover that this person’s friend was someone playing on the field.

With only the last letter of this person’s name to go by, Squires consulted her mother. Sherri went through the entire Cleveland Browns roster and found that there was only one person whose name ended with a “Z,” and that was right tackle, Mitchell Schwartz.

Schwartz texted her the next day and asked her out. They met for the first time on a blind date in November 2015, and instantly clicked.

After getting engaged in Malibu, the couple got married on March 10, 2018. Their wedding venue was the Cuyahoga County Courthouse, a historical site in Cleveland.

When she met her future husband, Squires was a student at John Carroll University. Her major is not known.

Squires now follows Schwartz where his career takes him, while also building her Instagram popularity. She has sponsored posts on Instagram, and has an estimated income of between $240.00 and $400.00 per post.