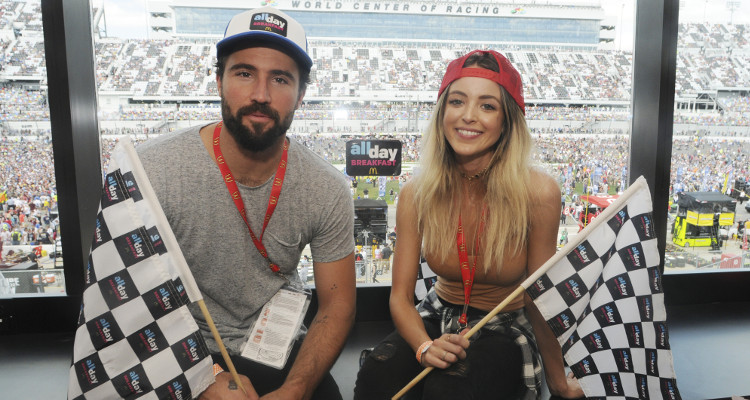 Brody Jenner was the resident party animal of The Hills. And with his hard partying lifestyle came a lot of girls. He’s dated so many famous women that it makes us ask: Who is Brody Jenner’s girlfriend in 2017?

Brody Jenner is never complete without a girl on his arm. The son of Caitlyn Jenner has had his fair share of women, and then some. His escapades basically made him a star on reality TV, even before his famous step-siblings took over. He’s keeping a low profile lately, only popping up now and then when it comes to taking on the Kardashians —like calling out Rob Kardashian for targeting Caitlyn in his rant against Blac Chyna. Brody always made for good drama. And we’d love to see him on TV again! Those fans who lost touch with what The Hills heartthrob is up to these days are probably wondering who Brody Jenner is dating now. That’s why we’ve compiled Brody Jenner’s dating timeline to get you up to speed.

No, we didn’t get Brody confused with his brother Brandon. It was revealed in Brody’s podcast that he dated Leah Jenner before she married his brother! Formerly Leah Felder, she was friends with the Jenner brothers since they were teens. Leah narrated how she and Brandon got together on the podcast saying, “I had a boyfriend, he had a girlfriend. And then when I was single one day, he was single one day and he came up to me and he’s like, ‘I’ve been in love with you since you were 11 years old.'”

And Brody added that he was that boyfriend! Awkward much? But Brody and Leah’s romance wasn’t that serious, at least not more serious than it could get for 11-year-olds. That’s right! Brody and Leah “dated” when they were in fifth grade, but Leah said that they never even kissed.

On to the more real relationships on Brody’s girlfriends list! He began dating Laguna Beach alum, Cavallari in 2005. They actually knew each other for years before their reality TV fame. They dated for more than a year and Cavallari called it her “first mature relationship.” They broke up in 2006. Now Cavallari is married to former quarterback, Jay Cutler and they have three children together.

Brody dated his childhood friend, Nicole Richie for a brief period, before they decided that they were better off as friends. Instead, he joined The Hills as the love interest of Lauren Conrad. Their romance would lead to the breakup of his bromance with Spencer Pratt. After their relationship ended, Jenner revived his romance with Cavallari, but only on the show.

Their relationship was just for the cameras. Years later, both Conrad and Jenner denied that they were a real couple. In fact, Brody said none of his relationships with any of the girls on The Hills were real, except for Cavallari.

With public knowledge that most of Brody’s romances were cooked up to hype the drama on The Hills, it’s hard to believe who he really dated and who he was simply hanging out with. He was linked with several Hollywood it-girls back then. He was said to be dating Hillary Duff’s sister, Haylie, and even Lindsay Lohan once!

He was also spotted with Nicole Richie’s ex-BFF, Paris Hilton, which made for some interesting dating rumors. He was later said to be dating Playboy playmate, Cora Skinner, but they didn’t last long either.

Jayde was another Playboy model Brody dated that was not as great as it seemed. They were an on-and-off couple for a long time. She had the distinguished honor of being badmouthed by Cavallari on The Hills, but she stuck with Brody nonetheless. Nicole was also his date to Heidi and Spencer’s wedding.

Some things about their relationship were also made up for the show, including the ugly fight she had with Cavallari. Brody and Cavallari kept their flirtatious relationship alive for the cameras. When he and Nicole were on one of their many breakups, she confronted Cavallari in a club. Though The Hills alum got the last word, Brody and Nicole were actually together until they broke up for good in 2009.

Before the punk pop princess married Chad Kroeger, she dated Brody Jenner for a couple years. Their fans couldn’t get enough of this pair, especially when they got matching tattoos! She was even his date to former step-sister, Kim Kardashian’s wedding to Kris Humphries.

But it wasn’t meant to be. They split after two years and it was not a cordial breakup. Brody reportedly dumped her because he wanted to focus on his own career and she wanted him to join her while she went on tour. After their breakup, Lavigne moved on with the Nickelback frontman, though they too divorced later.

In 2014, Brody introduced his new girlfriend, Kaitlynn Carter through his Instagram account. She had a few modeling gigs, but is really a fashion entrepreneur. She has a lifestyle blog and manages the online shopping site, Foray Collective. Unlike his previous relationships, Carter was his most serious one. After gushing about her in interviews, it was revealed that the couple got engaged in 2016.

Reports tended to focus on the soon-to-be Kaitlynn Jenner, whose name would be similar name to Brody’s father, Caitlyn Jenner (formerly Bruce Jenner). However, Brody’s engagement made even bigger news when Kim married Kanye West. Plus-ones are a serious business in Kardashian weddings, which are exclusive family affairs. That’s why Kim refused to let Brody bring Kaitlynn to her Italian wedding.

Not even her sister Khloe was allowed a plus-one! Brody actually didn’t go to Kim and Kanye’s wedding after his fiancée was snubbed. Instead, he went to Kim’s ex, Reggie Bush’s wedding! Much later, Brody clarified that his schedule wasn’t clear to travel to Italy for Kim’s wedding, while Bush’s wedding was in town so he could attend. There is no announcement yet as to when or where Brody and Kaitlynn will wed, but apparently the couple has said they’d like to be married near the ocean.