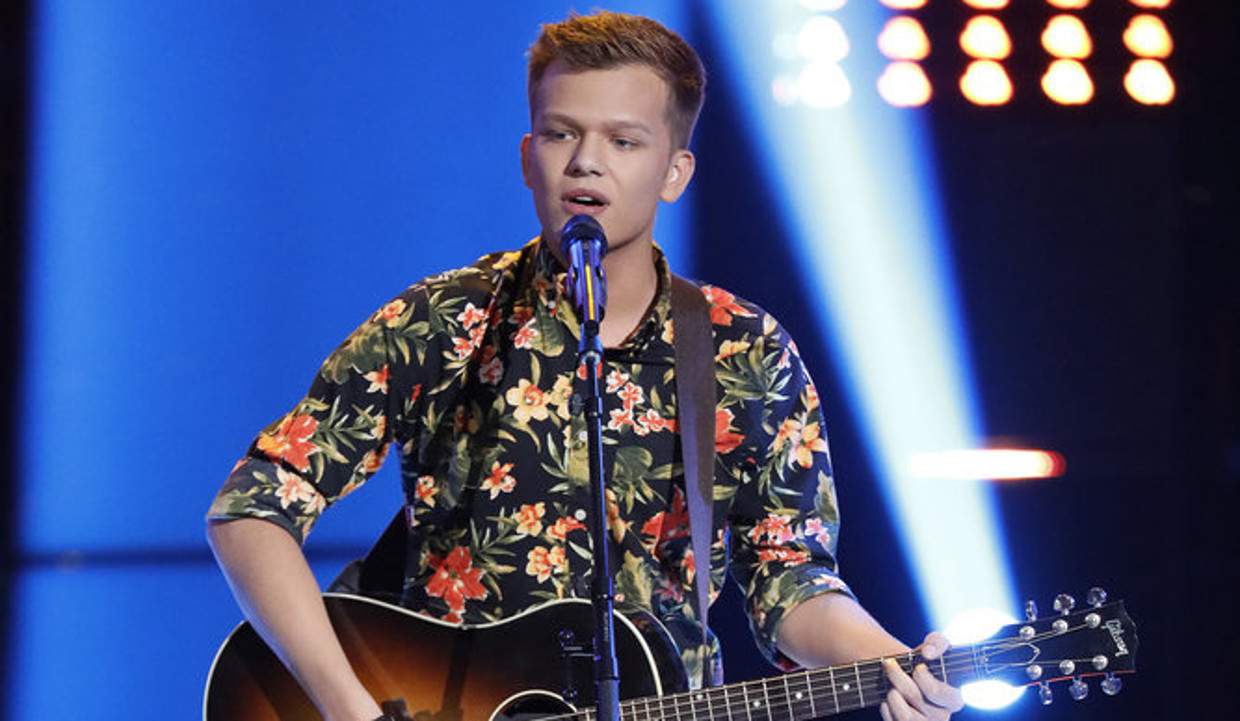 Season 14 of The Voice kicked off Monday with some mind-blowing blind auditions! One performance that stood out was that of Britton Buchanan. Performing on the biggest stage of his life, the young singer mesmerized the judges with his moving rendition of Ray LaMontagne’s “Trouble.” Keep reading to find out more about Britton Buchanan on The Voice.

Just one day in, the newest season of The Voice is already packed with amazing talent! And we can’t wait to see more of these incredible contestants in the coming weeks.

The competition is fierce so far. And last night’s blind auditions gave us a taste of the musical extravaganza in store for us this season.

Born and raised in Sanford, North Carolina, Britton Buchanan’s age was 17 during his audition. He is now an 18-year-old senior at Lee County High School.

Buchanan started singing at a young age. He performed in places around Sanford, including Cary, Raleigh, Apex, and Morrisville.

Talking to a local news station, Buchanan explained his love for music and theatre and said, “I started performing when I was about 10 or 11 at a local theater here in Sanford. But musically I think I was about 12 years old when I started in song and dance. Then it kind of took off from that.”

Buchanan even played Danny in a local production of Grease in March 2017.

Head over to Britton Buchanan’s Instagram to see more pictures of this rising star!

Come see Grease! Show dates are Thursday, Friday, and Saturday at 7:00pm and Sunday at 2:30pm! You don't want to miss this!

An Incredible Blind Audition on The Voice

A big fan of Bruce Springsteen, Buchanan blew the judges away with his soulful bind audition. His love for music was apparent as he delivered a breathtaking performance.

Levine said he was “a huge fan,” while Shelton called Buchanan’s performance “intense.”

Keys was full of praise for the young singer and said, “Britton, your voice has so much honesty in it. There is something so genuine about you. I go on emotion. I feel like that’s what makes music real. And I’d love to help you bring that out for people to be moved.”

Team Alicia All the Way

This year, the creators of The Voice brought in an exciting new twist with the introduction of the “block.” (Basically allowing each judge a one-time “block” that takes away another coach’s opportunity to gain that artist.)

Each judge gets an opportunity to use it once in the season, and Blake Shelton was quick to use it on Adam Levine, even though he denied it at first.

“I did block Adam. The reason I blocked Adam is because I want you on my damn team! That’s the truth, man,” Shelton later admitted.

But after all the drama, Buchanan finally went on to pick Alicia Keys as his coach! (Meaning, Blake just wasted his “block!”)

In case you missed it, here’s Britton Buchanan’s Blind Audition performance on The Voice:

Britton Buchanan now takes his place as a firm favorite this season—and fans cannot wait to see where his musical journey will take him! (With Alicia Keys as his official coach, there’s no telling how far he’ll go!)